You are here: Home  /  History  /  Monsignor Osoro receives ‘The Way of the Holy Grail’ on its 20th Anniversary
History 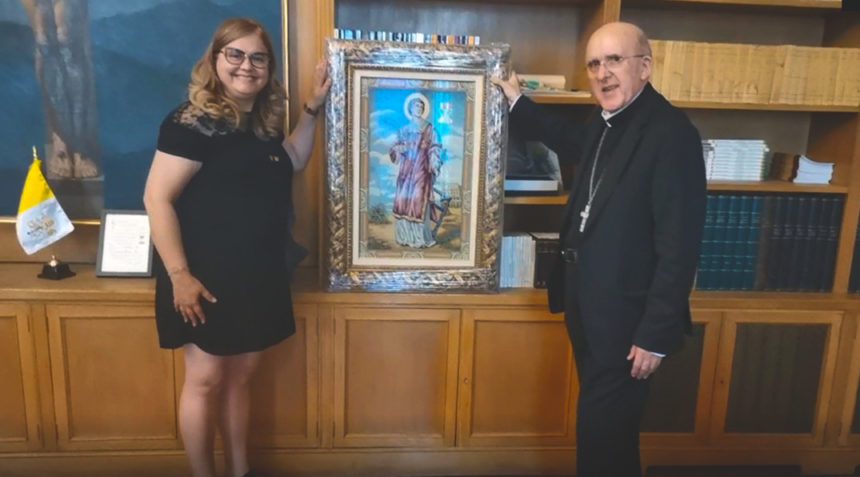 24/7 VALENCIA:COULD YOU TELL US MORE ABOUT THIS EVENT?

WAY OF THE HOLY GRAIL ASSOCIATION: The Way of the Holy Grail, Route of Knowledge, Path of Peace after two decades of work was presented in Madrid to D. Carlos Osoro Sierra.

Carlos Osoro Sierra, Cardinal Archbishop of Madrid received Dr. Ana Mafé García, president of the Cultural Association ‘The Way of the Holy Grail’ and Mr. Jesús Gimeno Peris, secretary of the Association and councillor of the municipality of Massamagrell at the Archbishop’s Palace in Madrid on the occasion of the presentation of The Way of the Holy Grail and the celebration of its 20th Anniversary.

Carlos Osoro Sierra was appointed Archbishop of Madrid by Pope Francis on 28 August 2014, and took office on 25 October of that year after five years as Archbishop of Valencia.

Carlos Osoro Sierra took office as Archbishop of Valencia on 18 April 2009. He has always shown interest in spreading knowledge about the Holy Chalice. Thanks to his dedication, the Holy See accepted in 2014 that Valencia could have a Jubilee Holy Year in commemoration of the Holy Chalice of the Last Supper, which has been venerated in the Cathedral in a chapel open to the public since 6 January 1916.

The Board of Directors in a meeting held on 24 May 2022 agreed by absolute majority to give an Honorary Recognition to His Eminence Carlos Osoro Sierra, Cardinal-Archbishop of Madrid. The act was solemnised on July 8th in the Chapel of the Holy Chalice of the Cathedral of Valencia in a thanksgiving celebrated for the 20th Anniversary of the Cultural Association The Way of the Holy Grail.

This recognition was also extended to His Eminence Cardinal Antonio Cañizares Llovera, Cardinal-Archbishop of Valencia and to the cathedral councils that have collaborated with the reception of pilgrims and the dissemination of the Way of the Holy Chalice.

After receiving the members of the Board of Directors at the Archbishop’s Palace, Dr. Mafé presented the Honorary Recognition in the form of a framed diploma, as well as a series of souvenirs.

Among the most artistic souvenirs was a Valencian silk scarf, hand-painted by the artist Eva Escamilla, from Ensedarte. Numbered copies were made and the first one was offered to the Monsignor. The main motif is the Holy Chalice, with the city of Jerusalem, Rome, Naples and Valencia at the corners.

It has a hand-painted Holy Chalice, making each tapestry a unique piece also made by the artist Eva Escamilla of Ensedarte. There are only five in the whole world. They are framed by hand using the gold leaf technique, in remembrance of the Eucharistic altarpieces.

Likewise, he was also offered a “socarrat”, a kind of tile handmade by the Housewives of Emperador, with ancient Valencian techniques in which the Holy Chalice appears as it is represented by the Cultural Association The Way of the Holy Grail to mark the route by hand, while waiting for the competent authorities to mark it and mark the path of shelters.

Because, for 20 years there have been pilgrims who make this way as evidenced by the distribution of more than 2,000 pilgrimage credentials distributed in recent years by the Association. It was very well received by Monsignor Osoro, above all, to see the depth that takes the Way of the Holy Grail in the Peninsula, as it vertebrates all of Aragon in addition to 5 Autonomous Communities more. So, we are talking about four routes that lead to the sacred relic: Andalusia, Aragon, Catalonia, Balearic Islands, Region of Murcia and the Valencian Community.

The meeting ended with the presentation of the Association’s pin and the book that Dr. Ana Mafé has written based on the conclusions of her doctoral thesis presented in 2019 at the University of Valencia, which was awarded Cum Laude with International mention. It is the first doctoral thesis in the world that studies with scientific methodology the sacred relic of the Holy Chalice of the Cathedral of Valencia and explains, without a doubt, why it is the only Hebrew cup of blessing that could really have been between the fingers of Jesus and leave there the legacy of his memory.

Don Carlos Osoro, was at all times very attentive to the explanation of the work carried out by this association for two decades and was grateful for the deference of receiving recognition on such an important date. He also offered a few words so that they can reach all those who are interested in spreading the history of the sacred relic of the Holy Chalice and its path.