You are here: Home  /  transport  /  OUIGO opens in Valencia its high-speed line to Madrid!
transport 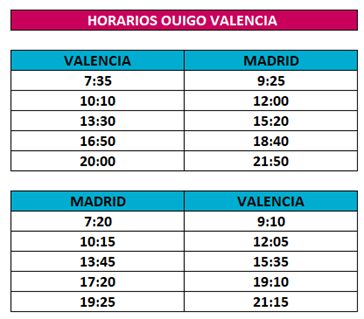 OUIGO opens in Valencia its high-speed line to Madrid!

The company  hold todays the opening ceremony of the Madrid-Valencia-Madrid line at Valencia-Joaquín Sorolla station, which will be operative from October 7th with 5 daily return frequencies (10 journeys). The weekly offer between Valencia and Madrid will exceed 35,600 seats, which together with the more than 64,000 seats on the Madrid-Barcelona-Madrid line will add up to a total offer of almost 100,000 seats per week. The opening of this new line is one more step taken by OUIGO on its way towards the democratisation of the high-speed train as a means of transport leading the decarbonisation of Spain.

OUIGO, the low-fare high-speed train operator in Spain, will open its second line in Spain tomorrow, 6 October, connecting the València-Joaquín Sorolla station with Madrid-Chamartín-Clara Campoamor in 1 hour and 50 minutes. The company will once again play a leading role in the liberalisation of the high-speed sector in an inaugural event to be attended by Hélène Valenzuela, General Director of OUIGO Spain, and the main authorities.

The line will be operational from October 7th, will have 5 daily return frequencies (10 routes) and will offer 35,630 weekly seats, i.e. 14,252 more seats than the initial offer, after receiving Adif’s authorisation to add 2 daily frequencies to the 3 included for Valencia in the package C of the liberalisation framework agreement.

Hélène Valenzuela, General Manager of OUIGO Spain, emphasises that “we are proud to say that, as of tomorrow, Valencia becomes the fifth city to enjoy affordable fares and a quality service on high-speed trains, thanks to OUIGO. This new opening means an important step forward in our commitment to make rail liberalisation a success, making the most sustainable means of transport accessible to the greatest number of Spaniards and collaborating in the recovery of mobility in Spain”.

The new weekly offer on the Madrid-Valencia-Madrid route will be added to the 64,134 on the Madrid-Barcelona-Madrid line, bringing OUIGO’s total offer in Spain to around 100,000 weekly seats (99,764), almost tripling the capacity with which it began operations on the Madrid-Zaragoza-Tarragona-Barcelona line (35,630) on 10 May 2021.

With its arrival in Valencia, the company is making progress in its strategy to democratise the railway sector in Spain and make it accessible to everyone, thanks to its sustainable, 100% digital and low-fare model. Its tickets, from 9€, 5€ for children between 3 and 14 and free for children under 3, have made it possible to attract new profiles to the high speed, such as families, young people, students and the self-employed. Similarly, its trains, the largest in Spain (509 passengers in a single unit and 1,018 in a multiple unit), have the potential to lead the decarbonisation that Spain needs. An OUIGO train pollutes on average 80 times less than a plane and 50 times less than a car.

The arrival in Valencia is OUIGO’s first stop in the Valencia Region, which will be followed by the opening of the line linking Madrid and Alicante, with a stop in Albacete, in the first half of 2023.

This route, which will have 2 daily return connections (4 journeys), is currently equipped with the ERTMS2 system, a different safety mechanism to those of Madrid-Barcelona-Madrid and Madrid-Valencia-Madrid, which requires more complex homologation of its trains.

OUIGO has also set itself the objective of reaching Andalusia as soon as possible to connect Madrid with Seville and Malaga, with a stop in Cordoba. To this end, it is working on homologating its trains to the track safety system known as LZB.

Timetables for the new operations can be seen with the image that accompanies this article. 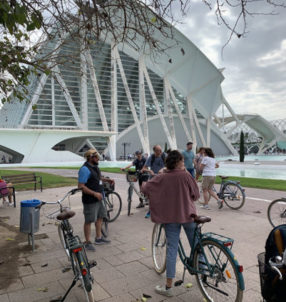 BIKING AROUND VALENCIA WITH ‘TOUR POINT’