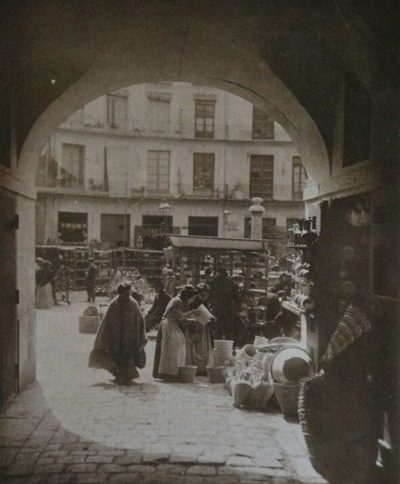 Plaça Redona (in Valenciano) is located in the geographical centre of the medieval part of Valencia.  This is  the area that constituted the shopping centre, la Alcaicería, and which also included el Almodí, which was a cereal warehouse. It also included ‘Almotafat’, which was the municipal control of weights and measures, construction and conservation of buildings, street cleaning and other aspects related to the development of daily city life. It was located in the Plaza de las Herbes (currently Plaza Lope de Vega) a few metres from Plaza Redonda, the general market, the slaughterhouse and the major butchers and the fishmonger, the oil and later Silk Exchange and other institutions and infrastructures of the medieval commerce of the city.

Its construction began to take shape at the beginning of the 19th century with the transfer, for public health reasons, of the slaughterhouse and butcher shop (then in decline and disuse) to a location far from the core of the city. Around 1837, the process of remodelling the urban space began with the demolition of the buildings and the subsequent drafting and presentation of the urban project by Salvador Escrig, municipal architect.

The project was innovative, on the one hand, due to the unitary conception of the design of the facades of all the buildings that fell on the square and to which the owners of said buildings had to adjust.  Also, it was very distinctive for the circular design of the space and finally for the conception of closed space of rational design dedicated to retail and housing within the motley medieval framework of the city.

Construction works began around 1850, finishing the last building in the early years of the 20th century. Until 1916, the interior of the square was empty of any fixed infrastructure, except the central source, which was one of the first eight drinking water sources installed in the city in 1850, in order to supply water in good hygienic conditions to the population and thus avoid the frequent cholera outbreaks that hit the city. It is worth noting the fact that this source is equidistant from all the buildings that make up the space, guaranteeing equal access to water for the entire neighborhood.

From the beginning, fixed businesses dedicated to hospitality such as horchaterias and taverns were installed on the ground floors of the buildings that made up the plaza, to the ceramic trade (one of which is that of my family), butchers or the sale of live animals, work clothes or silverware. In the central space, around the fountain, there were alternating stalls selling sweets or birds and so on.

In that year, 1916, a shelter was built by the city council, the objective of which was to provisionally house the fish retail businesses, pending location in the new Central Market building, under construction between 1914 and 1928.

This structure made of wood and iron, once the fishmongers had relocated to the new and modern facilities of the Central Market, served as a place for the same street vending businesses that existed before its construction, forming a kind of motley, labyrinthine and eclectic shopping centre for mobile wooden stalls where practically everything was sold from Monday to Saturday.

On Sunday, commercial activity continued, but already with a character closer to the ‘street’ way of life: live animals and pets, trinkets, second and third hand objects, watches and lighters (some of dubious origin …), antiques and more. For reasons that no one quite knows why… that ‘provisional’ structure became ‘fixed’ until 2012, when it was demolished during the rehabilitation process of the entire urban space.

Valencian artistic pottery shop, since 1860. Traditional pieces painted and handmade in Valencia. A wide range of plates, tiles, jugs… and all of them reproductions of medieval, 17th, 19th and modern ceramics. Family-run business dedicated to the sale of handmade ceramics: works to order, reproductions of Alcora ceramics from the 18th century, Valencian ceramics from the 19th century, Socarrats, Paterna ceramics, Gothic blue, collection jugs, porcelain, alabaster. A wide range of ceramics, both to give as a gift and to decorate your home.