You are here: Home  /  Sports  /  Regional rowing shows its strength in the National League of Sea Rowing held in Alicante
Sports 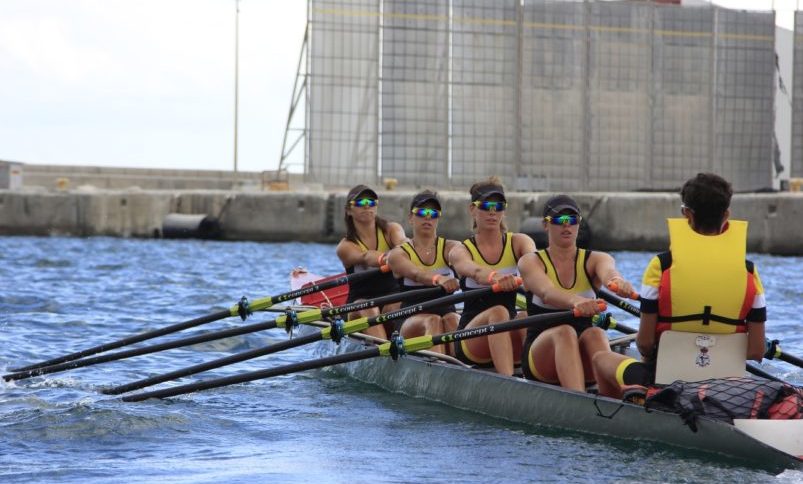 The fourth date of the II Iberdrola National League of Sea Rowing and the second regatta of the regional competition took place last weekend at the facilities of the Real Club Regatas Alicante. Saturday 17th and Sunday 18th were intense days of rowing, in which more than 140 athletes participated, offering a high level of competitiveness. This championship is supported by the PAC CV competition aid programme and promoted by the Spanish Olympic Committee and the Trinidad Alfonso Foundation. The event was also part of the campaign ‘La Comunitat Valenciana, la Comunitat de l’Esport’.

Saturday saw the start of the junior and senior categories in the National League, in the C4X+ and C1X categories, respectively, and a 6,000-metre course. The triumph in the youth group went to the girls of Club Deportivo de Mar Clot de L’Illot El Campello and the boys of Real Club Náutico Torrevieja. In the absolute age group, the representative of Club Náutico Santa Pola won the men’s race, while Club de Remo Castropol, belonging to the Asturian Federation, finished the women’s race in first position.

During the first day of competition, the regional competition was also held in different cadet (C4X+) and veteran (C1X and C2X) races, the distance of which was set at 3,000 metres; and the absolute (C2X). Real Club Náutico Calpe won the women’s youth races and Real Club Náutico Torrevieja did the same in the men’s group in this category. Club de Remo Castropol, which attended this regatta as a guest club, won in the women’s doubles and Real Club Regatas Alicante took gold in the men’s start. The Alicante club also dominated three of the four veteran races, while Club Náutico Altea won the women’s doubles.

Sunday’s National League regatta was reserved for the cadet and youth double-handed boats; and the C4X+ and mixed doubles in the absolute age group. Club Marítimo Linense, of the Andalusian Federation, won the cadet male and female youth races; the cadets of Real Club Regatas Alicante were first in their heat and the youth of Real Club Náutico Torrevieja dominated their start. The successes of the Torrevieja club were completed with two other victories, in the women’s senior and mixed categories of this National League, while the host club won the men’s senior.

Sunday’s regional competition also had the name of Real Club Regatas Alicante, whose representatives won in the four races contested, corresponding to the C4X+ and the mixed doubles for veterans and the SCM category (formed by people who have overcome Breast Cancer). The next event of the Rowing Federation of the Valencian Community is the III Desafío Cien Paladas Solidarias, which will take place on Saturday 15th October in Alicante.