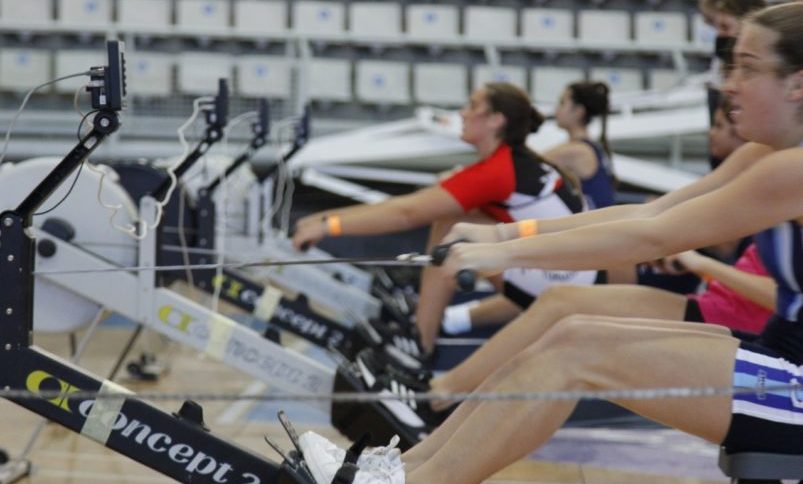 The Centro de Tecnificación de Alicante has been the scene, last Sunday 7th of November, of the spectacular SUMA 2021 Autonomous Rowing Ergometer Championship.

About 260 athletes participated in this particular test, which is carried out on land and by means of a machine that simulates the action of the rowing action.

The event was organised by theRowing Federation of the Valencian Community and followed the RowingErgometer modality PM5, which refers to the type of machine used.

Groups of all ages, from youth to veterans, took part in a multitudinous championship that was completed with a remarkable success in terms of organisation, participation and results.

In total, 316 athletes took part in the individual events and 118 in the relay events.

The event kicked off first thing in the morning with the junior category, where Real Club Regatas Alicante dominated, winning the two individual events, female and male, as well as the two relay events. The distance covered was set at 500 metres for the Individual and 1,000 in the case of the Relays, in which four people participate in each group. The children’s category had Club Remo Torrevieja as the protagonist, with three gold medals. The victory in the women’s team competition went to Real Club Regatas Alicante. In this category, the distance increased to 1,000 and 2,000 metres respectively.

Split of victories among the veterans
The championship had an under 23 female category, which was won by the representative of Club Náutico Gandía. In addition, there were also different events for veterans in the female and male categories. These were established according to the age group (30-39, 40-49, 50-59 and 60-69), 50-59 and 60-69) and had a similar difficulty: 1,000 metres. The victories were very evenly spread. Gold medals were won in the individual veteran category by the following clubs: Club Náutico Altea, Club Náutico Alicante Costa Blanca, Real Club Regatas Alicante,Club Náutico Benidorm, Club Remo Torrevieja and Club Náutico Campello. The two over 60s, which were outside the category of the regional championship, had representatives from the regional championship of the Club Náutico Benidorm.

In the category of SCM (Survived Breast Cancer), three athletes from Club Náutico Benidorm competed competed with a distance of 1,000 metres.

In addition, in the categories of disabled athletes, there was a PR3 category athlete, representing the Club Náutico Marina Internacional de Torrevieja.

Absolute category
The representative of the Real Club Náutico Valencia won the absolute women’s race, with a distance of 2,000 metres; while in the relay races, where the distance was doubled, the victories were for the ‘B’ teams of Real Club Regatas Alicante.