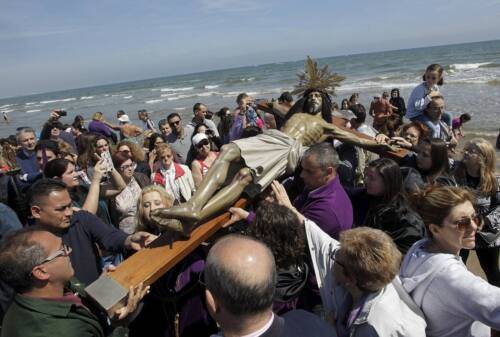 SAN VICENTE AND EASTER IN VALENCIA

##With the city all partied out and out of puff after Fallas, Valencia has never been big on Holy Week. Easter is a quiet affair around these parts. Some opt for a tentative pre-Summer trip to the beach in the patchy April weather. Others decide to get away to the mountains for fresh air and herbal teas (or perhaps more likely, lamb chops and jugs of beer). If you do stick around, however, you’ll find there’s still plenty going on even if the pace slows a little. Best of all, you’ll easily get a table in that restaurant you had to queue outside the door for during Fallas.

The only place in the city where you’ll find any major Holy Week celebrations is in the Poblados Maritimos down by the beach and the port. Far from the solemn, dignified processions you tend to find in Castille and Andalusia, the Valencian take on it all is a bit more relaxed. Here it’s just another excuse for Valencians to show off and dress up as if they were taking part in one of those 1950s “Sword and Sandals” epics, starring some bequiffed Hollywood beefcake. So… you get local people interpreting all manner of biblical characters, Roman soldiers, emperors, slaves, courtesans, virgins and saints, all dressed to the nines in their Quo Vadis chic. Pop into a Cabanyal bar during Holy weekend and you might encounter Jesus Christ sharing a quick caña and some olives with Herod, Delilah and Victor Mature.

At this time of year all over the city the bakeries fill up with the traditional Monas de Pascua, a sweet cake also typical in Aragon and Catalonia, which is made in the shape of an animal and decorated with coloured hard-boiled eggs. Up until the 60s and 70s, before everyone had a flat at the beach or could rent a casa rural, the whole of Valencia would flock down to the river or to Malvarrosa to eat the Mona along with Longaniza de Pascua (a sort of less spicy pepperami forerunner), eggs and chocolate. “A la vora del riu” (down by the river) games would be played, ropes would be skipped, kites would be flown and girls would be kissed. The girl in the old Valencian Easter joke says to her mother: “I lost my espadrilles down by the river”, her mother replying: “As long as it was only your espadrilles!”

These days, the boiled eggs are often replaced by chocolate Kinder eggs and the Mona is usually taken off to the villa or apartment to be eaten but the tradition lives on. It’s still a time for kite flying and the odd girl still gets kissed, although most of them lost their espadrilles a long time ago.

The weekend following Easter is known as the Pascua de San Vicente. Then first Monday after Easter Monday is San Vicente Ferrer day, which means we all get a second consecutive long weekend. San Vicente Ferrer along with his luckless namesake, San Vicente the martyr. The latter was tortured and executed by the Romans and thrown on a rubbish dump.

The two Vicentes are the most iconic of Valencian Saints. One is the patron of the region, the other of the city. Born in Calle del Mar in Valencia in 1350, Vicente Ferrer was never martyred, tortured or even called nasty names and he probably never even went near a rubbish dump. Vicente was the son of a rich lawyer, the godson of a Royal Prince. A prize networker, he was close friends with the Borgia family and intellectuals like Erasmus and Machiavelli. He was an extremely able politician, a dealer in influence and a proclaimer of Popes and had a great knack for always supporting the winning side, jumping ship whenever it suited. With incredible foresight he baptised Rodrigo de Borgia, who was to become the first Borgia Pope, dropping one of the heaviest hints in history declaring: “this boy will one day be Pope and he will make me a Saint”. Vicente was indeed fast-tracked to sainthood, just thirty years after his death, when Rodrigo ascended to the Papacy.

Throughout the week, you’ll start to see what look like ornate Punch and Judy puppet theatres popping up on corners all over the city centre. These are San Vicente’s altars, which provide the scenery for short plays acted out in Valenciano by local children. The plays depict the many miracles performed by the saint, because by far the coolest thing about San Vicente Ferrer is that he was the most prolific miracle worker of all time. Vicente is credited with 873 miracles, more than any other Saint. He is usually depicted with his index finger aloft because, in the same way that Samantha from “Bewitched” could do magic by wriggling her nose, Vicente could zap miracles out just by lifting his finger… like some sort of ecclesiastical superhero.

There are 18 altars in total around the city, the oldest is in Calle del Mar where they have been putting on the plays since 1561. Other altars can be found in Bolseria, the Central Market, Plaza del Carmen, El Pilar and Ruzafa. One of the miracles you may see dramatised is el “Salser” or “the cruet set miracle” where San Vicente cured a neighbour’s fever with just oil and vinegar (there is a commemorative plaque on the door of the house where this is proported to have happened at 37, Calle del Mar).

Another famous miracle was the “Mocadoret”, “the little handkerchief miracle”, where San Vicente proclaimed to his followers that there were people nearby who needed their help. “Where are these people?” his followers asked, the Saint told them to follow his hanky and he threw it up in the air and into an attic window where sure enough they found a poor and needy family…not all that unusual in Medieval Europe, to be fair. The square where this is said to have taken place is just off the Plaza de la Reina and is named after the miracle (Plaza Miracle del Mocaret).

Seats are put out around the altars, which are usually filled by the parents of the kids taking part. In the old days, money was thrown for the children by the appreciative crowd. The kids had to hand over the cash to the local priest, although there’s more than one story of junior San Vicentes performing a little miracle of their own by stuffing the coins into their shoes and hoping nobody had seen.