You are here: Home  /  History  /  SAN VICENTE FERRER…THE SAINT OF THE COMMUNITY OF VALENCIA
History 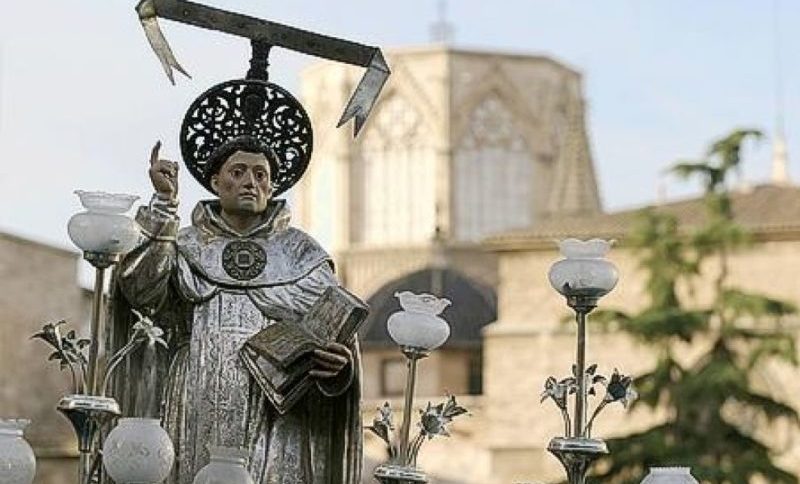 SAN VICENTE FERRER…THE SAINT OF THE COMMUNITY OF VALENCIA

For those of us living in Valencia, we know how important holidays are here, the almost one month-long celebration of Las Fallas being a prime example. The same applies when celebrating the Holy Week (Semana Santa) as the following weekend is San Vicente Ferrer Day, Monday, April 25th, 2022. Thus providing us with two long weekends in a row! Thank you, Valencia! You may ask, what is San Vicente Ferrer Day? Most importantly, San Vicente Ferrer is the patron of the Province of Valencia. You might also find people referring to him as “Sant Vicent, el del ditet” due to the saint’s reputation as a miracle worker… using his index finger. During the canonization process, San Vicente Ferrer was accounted for over 800 miracles, which is more than any other saint so far.

Now, what kind of festivities can we expect on April 25th? Firstly, there will be a mass at the Cathedral in Valencia officiated by the archbishop, after which there will be a procession to the birthplace of the celebrated saint. Ferrer was born in Valencia on 23rd January, in 1350. The procession will be attended by local associations and charities, as well as falleras, who will be making flower offerings.

Another part of the festivities are the dozens of altars placed around the city used by the children to present puppet shows, which illustrate the miracles performed by the saint. The theatrical shows are performed in the local language, Valenciano, and you are likely to see some of the more famous miracles, such as Miracle del Salser or Milagro de Mocadoret. The latter inspired the name of the Plaza Milagro de Mocadoret where you can find a tiled scene of the events with an inscription.

The altars can be found in iconic places, such as Plaza del Carmen, Plaza de la Virgen, or Plaza Mercado de Ruzafa. The oldest altar dates back to 1561 in Calle del Mar and is known as “Altar del Mar”. So, make sure to make your way to an altar near you… to witness the celebrations of the patron of the Community of Valencia. San Vicente Ferrer died on April 5th, in 1419.