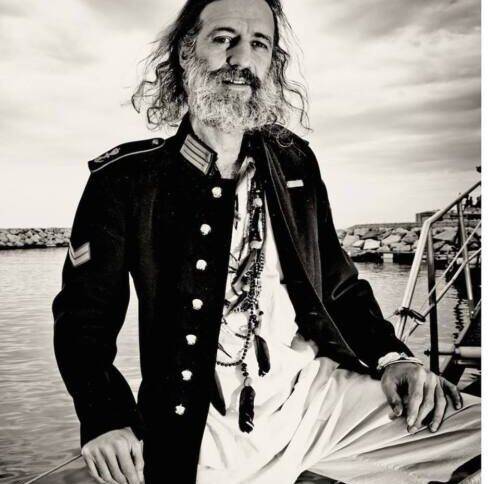 ##24/7 Valencia: Tell us about your  experience of travelling from the port of Valencia to the Caribbean in a sailing boat. Was it for musical reasons?

SERGENT GARCIA: I have been travelling for more than 20 years to Latin America and the Caribbean to work and investigate Afro-Caribbean music. I have worked in Mexico, Cuba, Jamaica, Puerto Rico, Colombia and it is always an intense experience. Experiencing playing with musicians over there is very enriching. Travelling to those countries makes you understand many things, musically-speaking but also socially and from a human perspective…you never come back to Europe the same.

Although you travel a lot, Valencia is your home. With the  change of local government, do you see the possibility of a more open city towards music and culture in general?

I’m hoping that will happen as many people have seen that, unfortunately, Valencia was converted into a cultural desert for the last 20 years under the previous government. Valencia is a beautiful place and the people here are creative and generous. Yes, i hope that the new politicians will generate more access to culture with more original and alternative proposals and that Valencia will once more become part of the live circuit because there is a public but the big bands don’t tend to stop here on tour.

Cumbiamuffin is the bridge between Reggae and Cumbia, a Colombian style of music which is a meeting between Afro, Native and Spanish music. I would add that ragamuffin is a Jamaican style of music. It’s a very explosive cocktail on the dancefloor.

Tell us a bit about each song from your latest album, which has the valenciano title: ‘Contre Vents et Marées’

Reina del Mar is a homage to Yemaya, the goddess of the sea from the Yoruba religión, which is very popular in Cuba.

C’est La Vie is a song of love that i wrote with my friend Balbino.

Al Amanecer is a very Colombian cumbia that talks about party drums in the mountains.

Siempre Lo Mismo is a song about the environment and how we lack intelligence as humans living in a world of paradise and turning it into a rubbish tip.

Don Clemente is a true story about a mechanic who helped us when we were adrift at sea.

Personne ne me Stoppe Now that is Cumbiamuffin

Siembras is a love song and a duet with an African Singer called GALAIFA. In this song my son played the guitar.

Solo son Mentiras is a song about the corruption of our politicians, i wrote it while watching the televisión in Spain. I wouldn’t risk my neck for them.

Sous Les Etoiles is a song in French and English, a more digital type of reggae track.

El Pescador is in a more Afro-Caribbean style, which talks about the hard life of a fisherman.

Lágrimas Negras  is a reggae versión of the famous song of Miguel Matamoros. It has been covered a thousand times but never in the style of reggae. It’s a combination of Jamaican and Cuban music.

Baba Ogbe closes the álbum with another traditional song from Cuban folklore. It is dedicated to Obatala, one of the Orishas, a deity of peace.

In your experience, what is the difference betwen living in Latin America and Europe ?

Latin America is like a continent, it is immense and they don’t live the same way in the Caribbean as in the Amazonian jungle or in Bogota, which is 2600 metres above sea level.

The way of life in Cuba is unlike anywhere else. Colombia is very diverse as there are the varied cultures of Africa, Native, European, mixed race, coastal, the jungle and the mountains.

I feel that in Europe we are still too Euro-centric. That is to say that we think that Europe is the centre of the world and that is just not the case. There is a lot of life out there, ha-ha-ha!

What are your plans?

To finish the ‘El Guakamayo’, a sailing ship that i am restoring, to install a nomad recording studio in it. I then plan to travel around Europe by sea and maybe Latin America.

Click on this link for video of  the single ‘Siembras’ filmed in La Huerta of Valencia: https://youtu.be/uhO3yvJirik