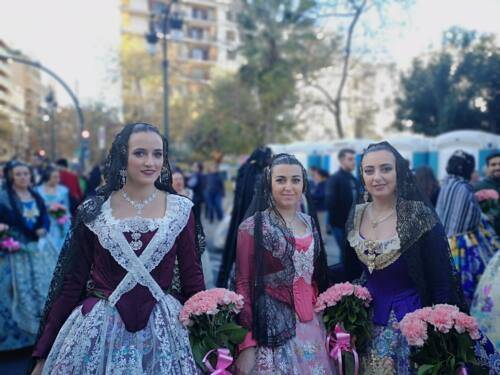 WHAT DO THE VALENCIANS THINK OF FALLAS?

##Daniel Sanchez has been a fallero for over twenty years in Falla Seneca-Poeta Mas y Ros, one of the hundreds of smaller neighbourhood fallas dotted around the city.

What do the Fallas mean for you?
-Fallas for me is a traditional festival where you get the chance to get together and enjoy yourself with your friends and neighbours for four whole days.

What do you like most about Fallas?
-The Mascletas, the bigger monuments and enjoying yourself in the Casal.

And what do you like least?
-All the roads that are blocked!

Is there anything you would change?
-Yes, I would make the Cremá always on a Monday. That way everyone could enjoy three days of Fallas every year without having to take time off work.

Do you have to be a fallero to enjoy the Fallas?
-Of course not. Everybody can enjoy the fireworks, the Mascletas, the music in the Verbenas (street parties), the monuments and even the Ofrenda (the offering of flowers to the Virgin).

Is the Ofrenda important for you?
-To be honest it’s not that important to me personally but I know that for most falleros it is one of the most important parts of Fallas.

Do falleros organise anything special during the rest of the year?
-Oh yes, in our falla we go down to the Casal quite often at different times throughout the year for Friday night dinners, lunches together on a Sunday and a few parties and festivals here and there.

Do you have any problems with the neighbours?
-You get a bit of everything really. People who complain about every little thing and people who although they aren’t falleros go out of their way to be cooperative.

What’s the difference between a smaller falla like yours and one of the big ones?
-In a big Falla there’s more money to build bigger monuments and organise bigger and better bands, fireworks and Verbenas but in our falla there’s a real sense of community where everyone knows everyone and everyone belongs.

Laura Ganau is married to a fallero in one of the biggest and most famous fallas, Na Jordana. She has two daughters who are falleras in the same falla.

So you are not a fallera yourself?
-It’s the dressing up I don’t like. I just don’t see myself in the make-up the hairdo and the big dress but I’ll be at all the parties and you’ll find me in the Casal throughout the whole festival.

Do you consider it an honour for you to be involved with a falla like Na Jordana?
-Like many of the fallas in the Carmen Na Jordana is more than 125 years old and is the oldest falla in the special section. We feel proud of the falla but no more than the falleros of any of the other fallas right down to the smallest.

I suppose you will get visits from people that won’t have visited smaller fallas.
-Every year we get footballers, bullfighters, actors, singers and politicians popping in throughout the week. Over the years people like Hemingway, Dali and Ava Gardner have visited the Clot Faller amongst other international stars. The famous Spanish singers Alaska and Carmen Sevilla, Joaquín the football player, Lucia Bosè and TV presenter Andreu Buenafuente are all currently paid up members of the falla.

What is your favourite part of the festival?
-My favourite part of fallas is right at the beginning, the Planta, the night the monuments are finished off and put in place. All the falleros eat a dinner together to celebrate the opening of the festivities and we help the artists to put the finishing touches to the monument. There’s a flow of people all through the night watching us work and looking at the falla. We stay there all night until the jury comes the next day.

Vicente Puig is a born and bred Valencian who has never been a fallero.

A Valencian but never a fallero?
– Like many other Valencians I really enjoy Fallas but I like to get a general view of the festival, to get around and see everything rather than be stuck in a Casal tied to only one falla.

But doesn’t that mean you’re not really getting involved?
-Of course not. Everyone who is in the street becomes an integral part of the festival. We are the ones who watch the firework displays, throw the bangers, eat the bunyols and dance in the Verbenas. In the theatre if there’s no audience there’s no show.

What is the best part of Fallas?
-My favourite is the mascletà, which is something that is unique to Valencia. I will say though that more and more I prefer the Mascletas in the neighbourhoods rather than the one in the Plaza del Ayuntamiento. Set up, as they are, in the middle of the streets without so many barriers and the people watching from the balconies. You can get much closer.

And the worst?
-Too many streets are closed. There are too many traffic jams and there is not enough public transport. Streets should only be blocked if it is completely necessary. With a little more give and take and organisation everyone would enjoy the festival even more.