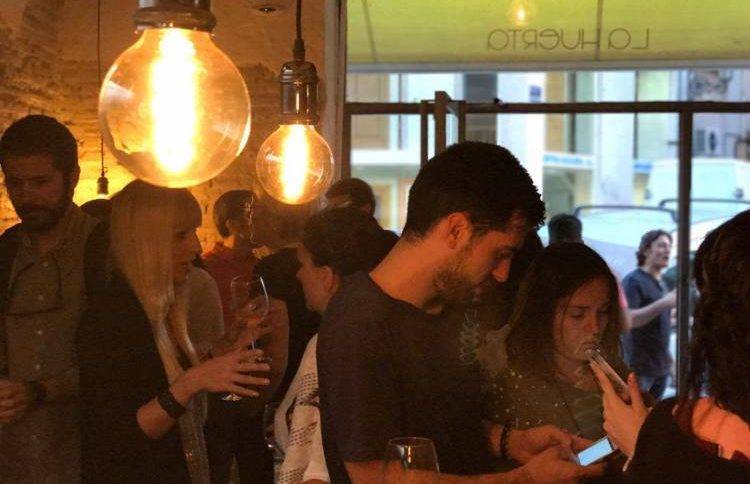 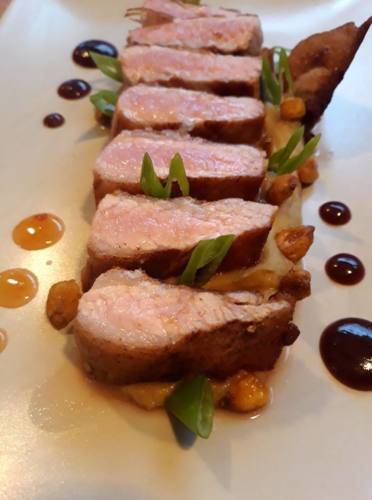 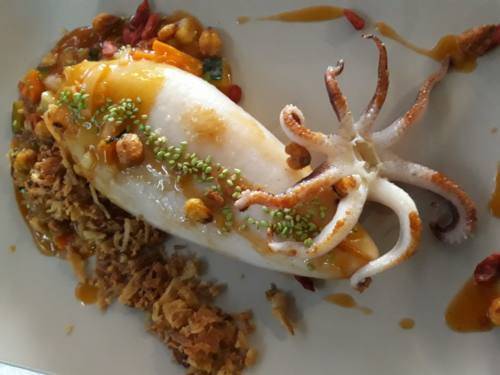 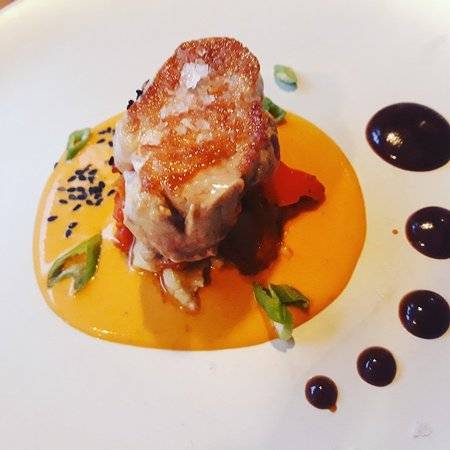 This new venture started just 10 months ago but it is already starting to make waves. Chef Ramonet and his team have made this compact restaurant bar one of Valencia’s best open secrets! They are always warm & welcoming every time that we have popped by…

Away from all the noise of the Barrio del Carmen, it is still just a stone’s throw or so from the Torres de Quart! It is based in the mellow & increasingly arty barrio of Botánico, which is literally across the road from the historic centre.

‘La Huerta de Ramonet’ is open to all nationalities. There is definitely a positive energy to this place. It is popular with all sorts of ages and backgrounds regarding the local Spanish clientele as well as discerning foreign visitors looking for quality and originality in an unpretentious atmosphere…

No paella except on Sundays! They differentiate themselves from the competition by not doing rice dishes during the week and they do not have a fixed menu…rather a tasty combination of tapas and fish, meat and vegetable dishes, depending on what the chef has brought fresh from the Mercado Central that day.

Ramonet spent 15 years away from his native Valencia, cooking in Berlin for 8 years. He studied cuisine in Vietnam and Cambodia and also cooked in Australia. He has also lived & worked in Chicago, Ibiza, Barcelona and London. He speaks six languages: English, Spanish, Italian, German, Valencian and “reasonable” Portuguese!

As you enter, there is a most distinctive “chandelier-style” lamp decorated with flower shapes that has an emblematic feel and sets the tone for the two floors. The downstairs bar has a warm, wood finish with attractive, distressed brickwork wall. On the walls, you will find works of art, including a painting by self-taught Valencian artist Eduardo Bermejo, reminiscent of the great Pablo Picasso.

Indeed, there is an occasional Andalusian touch to parts of the menu (more of which later) and there are sometimes flamenco jams. We were fortunate to have a rather urbane flamenco guitarist discreetly accompany our tapas during the mellow Friday night that we last dined there. We were gently serenaded with a memorable and understated version of Pata Negra’s ‘Yo me quedo en Sevilla’. We ended up having a fascinating chat with him afterwards about what seemed like every subject under the sun!

Upstairs there are more tables and there is more space, which makes it perfect for groups and families. The white tablecloths, comfy white chairs and vintage white walls gives it an ‘Ibiza’ vibe and the music soundtrack includes flamenco, blues and jazz…

Instead of red wine, it was their expert experience that suggested we savour our tapas with their ‘vermut’ from the region. Our waitress suggested we try two different Valencian vermouths, both of which were by ‘Carmeleta’ with its distinctive design. For the man, she suggested a ‘Raiz de naranjo’ and for the woman a ‘Flor de Azahar.’ They have discovered that these are the most favourable flavours for their clientele’s palate, according to gender. The orange vermouth had presence and freshness while the flowery liqueur had a lighter touch…

First up was ‘Crema de Calabacin’(mashed courgette), which was presented in a glass and was quite warm, smooth and tasty…making evident the superior quality of their ingredients.

They dared us to try their ‘Steak Tartare’ which was a raw ground beef dish which we were slightly trepidant about…but ended up savouring. Served on black platters, it was a subtle dish, with plenty of textures or ‘matices’ with the olive oil, herbs, salt and Worcestershire sauce combining perfectly. No after effects were felt.

One of the most memorable dishes we tried was their ‘Huevo trufado de Ramonet’, which were truffled eggs with potatoes and a light chorizo sausage. You really felt the love put into this dish by Ramonet and served by Tamara. By the way, it is a lot easier to slowly enjoy this dish in person than it is to photograph to try and do it justice!

To go with the 1940s jump blues seeping out of the speakers of the bar, our final dish was a ‘Pargo Imperial’ snapper fish. It was tender and delicious and it was probably the dish we took most time over with our vermouths. The lovely long brown strips of sautéed onions really brought out all the flavours that included fennel, curry, pepper and thyme.

Desserts include ‘Crema de Chocolate a La Naranja o Fresa’ and a favourite with the locals: ‘Homer Simpson Doughnut with blue vanilla.’

Ramonet explained to us that they are especially popular for their exquisitely prepared fish dishes like ‘Pez de Roca con Limón’,which is a rock fish dish typical of the South of Spain.’ They also have vegetable dishes according to the season like pumpkin or courgette fusions.

They choose their wines from small and independent winemakers, which change according to the season. Their Gins include Raspberry and Ginger Ale flavours.

Overall, we had a memorable evening of top quality dining, creatively presented and with welcoming and informed hosts. It’s somewhere slightly off the beaten track and worth making a reservation for due to the limited space.

A wonderful place to take visitors if you want to take them somewhere really Spanish in its own way, with a natural vibe and quietly dynamic too. They have already developed a loyal fan base in Valencia in recognition of their good work. We’ll be back here before the month is out!