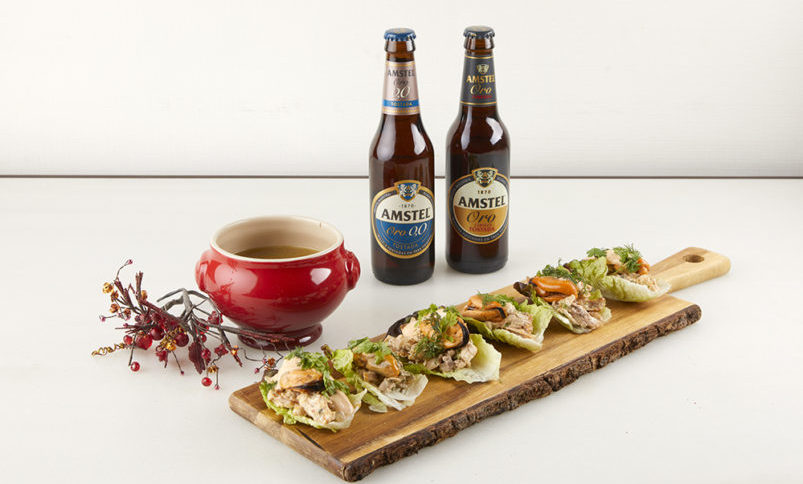 Amstel and Ricard Camarena present an ‘integral cuisine’ proposal to approach the festive season in a tasty, healthy and sustainable way.

Taking advantage of two of the star dishes of Christmas banquets to give them a second and original life, the chef creates an exclusive menu that includes Amstel Oro in its preparation process and that pairs with this toasted beer with a recipe by the Valencian master brewer Rafa Sánchez.

A consommé and a salad, two healthy, tasty and sustainable recipes that are born from a concept of ‘integral use of the product’, where the whole food and the elements resulting from the production process are used in a creative way to reduce food waste.

This approach of the double Michelin Star is perfectly in line with Amstel’s commitment to sustainability and is an invitation to bring growing environmental awareness to Christmas celebrations, starting, for example, in the pantry and kitchen.

Three S’s ( ‘Saludables, Sabrosas y Sostenibles’) can make a gastronomic mark this Christmas, following in the wake of the three R’s that define ecology: ‘Reduce, Reuse and Recycle’. In this case, Amstel and Ricard Camarena propose a way of facing the banquets that fill the calendar these days with ‘integral cuisine’, a way of approaching the cookers and the pantry in a Healthy, Tasty and Sustainable way.

The chef from Barx, Double Michelin Star and Green Star, also awarded by the famous French guide, has developed a whole system of food utilisation and product circulation within his five restaurants that allows maximum benefit to be obtained from raw materials with minimum waste.

This planning can mean that, in his gastronomic restaurant, Ricard Camarena, a part of a specific food is used while the rest is used in the recipes of Canalla Bistró, Habitual, Central Bar or his recent new opening, Bar X. The menus of the establishments are coordinated and adapt to the natural calendar of the products, giving priority to seasonal and local food, but also to the rotation of the pantry between them. “It is a very creative approach to cooking, which requires much more inventiveness. It is easy to make a dish with a clean cut of a good sirloin steak, for example. But it is not so easy to see how I can use cooking broths, certain parts of the food or even leftovers from preparation processes to cook something new without losing quality”, explains the chef, who maintains that for a long time this skill has been scorned as ‘leftovers cooking’ or ‘poor man’s cooking’ when, in reality, it is an ‘integral use of the product’ which is an expression of imagination, culinary knowledge and commitment to the environment. “It significantly reduces waste, which in many restaurants, but also in many kitchens at home, is alarming,” says Camarena.

A way of thinking and planning work that ties in perfectly with Amstel’s commitment to sustainability, a beer brewed with the power of the sun thanks to the photovoltaic energy that powers its facilities in ‘Quart de Poblet’, the only brewery of a major brand brewer that produces its products in the region. And it has a circular system that minimises waste in all the processes related to the production, packaging and distribution of this Km0 beer.

Small examples of how it works in this sense is the detail of reducing the density of the cans and bottles in which this Amstel ‘Made in Valencia’ is packaged, which requires less glass and aluminium, recyclable materials. This reduces their weight and makes it easier to increase the amount of product transported, reducing CO2 emissions in distribution. In addition, 100% sustainably sourced cardboard and 50% recycled shrink wrap are used for packaging.

Another example of this spirit is how bagasse, the product left over after fermentation of the 100% barley malt used to make Amstel, is given a second life as animal feed, in collaboration with Valencian pig and cattle farms.

These are two of the many measures that are applied at the HEINEKEN España family’s facilities in Quart de Poblet, where sustainability is a fundamental pillar. A mentality that Camarena shares and that has guided them when presenting ‘A Christmas without waste’, a recipe specifically prepared by the renowned chef that includes in its preparation and paired with Amstel Oro, the premium variety within the Amstel range. A beer that has its origins in the Comunitat, as the Valencian master brewer Rafa Sánchez was in charge of elaborating his recipe, 100% roasted barley malt with three shots of fire.

THIS CHRISTMAS, AMSTEL AND CAMARENA PRESENT A CULINARY PROPOSAL THAT BRINGS TOGETHER FLAVOUR, IMAGINATION AND COMMITMENT

During the Christmas holidays, the calendar is full of celebrations for which too much is cooked and perhaps too much is eaten. Even so, there are leftovers that often end up in the rubbish unnecessarily. From the ‘integral cuisine’ that Camarena proposes to take full advantage of the products and following the three S’s that can mark this Christmas on a gastronomic level, the chef has created a tasty, healthy and sustainable menu. “It’s perfect, for example, for one of those days between banquets, when you don’t want to punish your stomach too much. We can make something light, nutritious and of high quality using as a base many of the things we have cooked during the festive season”, says the Amstel collaborator.

It is very common to find roast or stuffed chicken on Christmas tables, as well as ‘Putxero de Nadal’ broth… On the other hand, there are usually steamed mussels. Amstel and Camarena propose to take advantage of the elements resulting from the preparation process and the leftovers of these dishes, adding new ingredients to transform them into a menu full of contrasts of flavours and textures, brave in the combination of foods and that combines perfectly with Amstel Oro, and its 0.0 version. This premium variety of the Amstel range, with triple toast, is light yet full-bodied, so it cleanses the palate after each mouthful. In addition, its aromas and flavours are more intense. All this makes it ideal to accompany dishes with personality, such as those created by the double Michelin star.

For this ‘Christmas without waste’, it is a consommé and a fresh salad. In both dishes, the contrast of chicken with mussels, aromatic herbs and beer surprises the diner from the philosophy of ‘integral cuisine’, making the most of the pantry thanks to creativity, with a multitude of stimuli, but light on the stomach thanks to its natural and healthy ingredients. A delicious and sustainable proposal for this festive season in which the flavour of things well done can coexist with the commitment of the people who make them.

Using the elements resulting from the preparation process and leftovers of two common dishes on Christmas menus, chicken and mussels, Ricard Camarena and Amstel Oro propose an ‘integral cuisine’ menu, where the ingredients are used to the maximum and food waste is minimised. The aim is to generate a culinary proposal characterised by the three S’s in Spanish: ‘Saludables, Sabrosas, Sostenibles.’

Consommé:
Ingredients (4 people):
500 ml of leftover chicken (bones, pieces of breast or thigh… ) or leftover soup from the Christmas putxero de Nadal.
500 ml of the broth from steaming mussels
Half a squeezed lemon
1 glass of Amstel Gold
1 splash of extra virgin olive oil
1 pinch of salt
A few sprigs of chervil and dill
Preparation:
With the leftover bones of a roast or stuffed chicken, we make a soup or use the leftover from the Christmas ‘Putxero de Nadal’.
Add the stock left over from steaming mussels and the rest of the ingredients: half a squeezed lemon, chervil and dill sprigs, a little EVOO (Extra virgin olive oil) and salt plus a glass of Amstel Gold.
Boil for 10 minutes and leave to stand.

Preparation:
On the one hand, fry a garlic with paprika and add vinegar (to taste) and the previously steamed mussels. Sauté for a few minutes and set aside the broth from the marinade.
On the other side, chop the pickles and aromatic herbs. Add the shredded chicken and mix with the sauce until it sets.
Place portions of this mixture on each lettuce leaf and top with a pickled mussel and a little more sauce.

Serve:
Heat the consommé and serve in bowls, accompanied by the fresh chicken salad and pickled mussels.
Pair with Amstel Oro or Amstel Oro 00, a 100% barley malt beer. Its light body helps to cleanse the palate after each mouthful, while its more vigorous aromas and flavours perfectly accompany dishes with more adventurous food combinations, with varied stimuli for the palate. A beer with character, perfect for menus with personality. 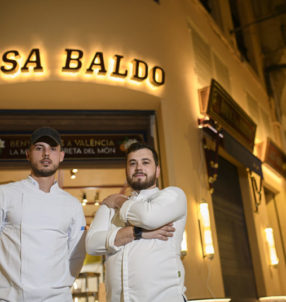