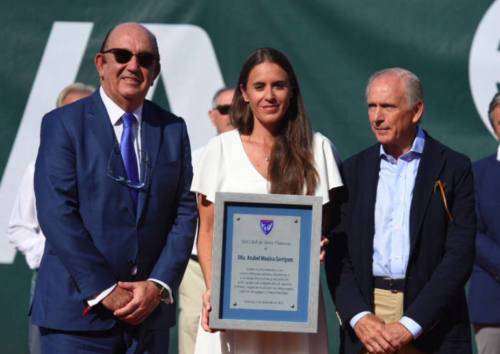 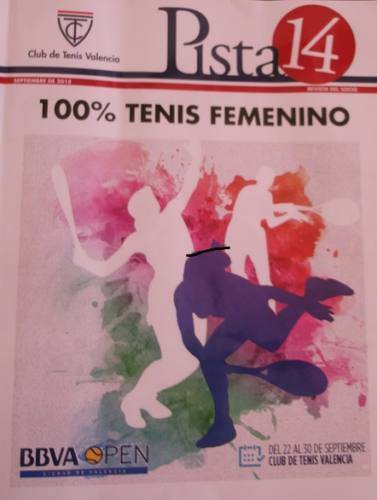 After successfully hosting the Davis Cup quarter-final between Spain and Germany in April, professional tennis came once again to Valencia in the shape of the Women’s ITF Pro Circuit $60,000 + H (hotel) event.

This is the third year of the tournament and the Club de Tenis Valencia promised it would be bigger and better than the previous two.

Firstly, the prize money had been upped by $35,000 dollars from the previous year. With the additional incentive of the paid hotel again retained for the players, the event attracted competitors from just outside the world’s top 100.

Secondly, the venue nestled in the centre of the Benimaclet neighbourhood has an excellent track record of hosting iconic tennis competitions. It has been home for the Davis Cup three times and it was also used when Spain beat the USA in 1995 to win the Federations Cup.

Thirdly, the semi-finals and final were televised for the first time by Eurosport 2, and sideshow events like wheelchair and blind tennis exhibitions ensured other disciplines were featured. Also, in conjunction with the event there was a training course run by the Spanish tennis federation, a conference on physiotherapy, and a gastronomical market in the side street adjacent to the club.

Finally, the event’s trump card was the tournament director Anabel Medina Garrigues. The Torrent born tennis star retired last month after more than two decades and 1,599 matches on the pro-circuit. She has been at the forefront of this tournament since its conception and her experience and attention to detail has not gone unnoticed by everyone concerned.

As for the tennis itself, it was of an incredibly high standard and had some marquee matches that any tournament would be jealous of.

The singles tournament had three qualifying rounds to see which four players from 32 entries would advance to the main draw. Often, some of the best matches in a tournament are the final rounds of qualifying. The players are usually evenly matched and looking for automatic entry next time round.

One such match was the contest between Paula Ormaechea of Argentina and Gabriela Ce of Brazil. Being doubles partners in this tournament, it was not surprising the game was played in a friendly spirit and the final score of 6-3, 6-3 to the Argentinian did not reflect how close the match actually was.

Ce did actually make it into the main draw as a lucky loser but got knocked out in the first round by the Italian, Martina Trevisan. More unexpectedly, were the defeats of the number one and two seeds Carina Witthoeft and Ysaline Bonaventure, who were also eliminated in the same stage of the competition.

Witthoeft, currently positioned 92 in the world (career high of 48) lost in the second round of this year’s US Open to Serena Williams and was firm favourite to beat the inaugural winner of the event Jasmine Paolini, but the Italian upset the odds to claim a 6-3,6-4 victory.

The Belgium Bonaventure played Guiomar Maristany Zuleta de Reales, who was a wildcard entry. To the delight of the home supporters, the Spaniard came out victorious 6-4 in the final set after winning the first set and losing the second by the same score.

With the two top seeds toppled early, it made the singles tournament a really open contest. With six or seven players in with a realistic chance of winning, many of the games were incredibly close.

The tournament also chose its two night matches well. With the floodlights at the venue upgraded to meet the requirements for ITF events, it gave the working population of Valencia a chance to see some evening tennis.

The first night game was a second round match between Paolini and the Australian Isabelle Wallace and it was a three set slugfest that went to the Italian.

The final night match of the tournament was a real humdinger. Last year’s champion Irina Bara of Romania was pitted against Paula Badosa Gilbert. The Spaniard has a strong serve and volley game that is not ideally suited to the clay surfaces at the Club de Tenis, Valencia. However, her fiercely competitive spirit saw her save two match points and finally wear down the Romanian to creep into the quarter final by a score of 6-3,2-6,7-5.

Badosa Gilbert’s next opponent was the Serb Nina Stojanovic. The number one doubles seed (with Irina Khromacheva of Russia) proved equally tough to overcome. The Spaniard finally won on her ninth match point and Stojanovic herself came within two points of winning the encounter. The result of the duel in what was arguably the match of the tournament was 6-4, 6-7 (11), 7-6 (7).

In the other half of the draw the Argentine Ormaechea was going deep in the tournament and reached the quarter final before being outgunned by Aliona Bolsova Zadoinov to give the South American an unwanted birthday present.

Despite Badosa Gilbert being born in the borough of Manhattan in New York and Bolsova Zadoinov hailing from Chisnau in Moldova there was a strong possibility of two “Spaniards” participating in the final.

This duly occurred as in the semi finals Bolsova Zadoiniv beat Slovakian Rebecca Sramkova in three and Badosa Gilbert defeated Basak Eraydin when the Turk had to retire injured when 2-0 down in the ultimate set.

The final itself was fitting of the tournament itself. The world number 182 Badosa Gilbert (who resides in Begur, Catalonia for some of the time) was the first out of the blocks and won the initial set 6-1. Bolsova Zadoiniv, who gained Spanish citizenship in 2013 came back strong and won the second set 6-4. Ranked just four places above Badosa Gilbert at 178 in the world the crowd anticipated a close third set. However, Badosa Gilbert had other ideas and whisked through it 6-2 to claim the title and make it one of her biggest wins to date since her victory in the Roland Garros Junior French Championships in 2015.

The doubles event went according to seed with the number one pair of Nina Stojanovic and Irina Khromacheva comfortably seeing off the threat of the Greek/Mexican combination of Valentini Grammatikopolou and Renata Zarazua.

There is no doubting that the event was a huge success and that Anabel Medina Garrigues and her team are creating a Women’s tennis tournament that the city of Valencia can be proud of.

Doubles champion Irina Khromacheva summed it up best by turning to the tournament director in her doubles victory speech to say “Ana, this is the best ITF tournament, I swear”.

Her affinity with her team, and the Club de Tenis Valencia’s passion to build and create an event worthy for the world stage was there for all to see throughout the week.

Everyone played their part, from the local ball boys and ball girls, to the 70 plus volunteers from Fundacion Deportiva Municipal de Valencia. For Anabel, her next personal objective for the tournament is simply to make it a $125,000 dollar WTA event that will attract the absolute  best players to Valencia. But as she says herself this will be done “sin prisa, pero sin pausa”.