You are here: Home  /  History  /  THE BASILICA OF SAN LORENZO IN ROME OPENS ITS DOORS TO THE CULTURAL ASSOCIATION OF THE WAY OF THE HOLY GRAIL
History

24/7 VALENCIA: COULD YOU TELL US MORE ABOUT THIS SPECIAL TRIP FROM VALENCIA TO ROME?

HOLY GRAIL ASSOCIATION: “The Cultural Association The Way of the Holy Grail was invited by the A.I.C.S.L. of the Basilica of San Lorenzo for its international presentation.

One of the most important events held this year to celebrate the 20th Anniversary of the Cultural Association The Way of the Holy Grail was undoubtedly the international meeting in Rome, sponsored by the Comitato San Lorenzo Diacono e Martire nel Mondo – whose leader Fabio D’Ortona has carried out in a masterly way.

The host of the celebration was Father Arturo Nevastri, Franciscan parish priest of the Basilica of San Lorenzo, who received from the hands of Dr. Ana Mafé a copy of the book “The Holy Grail” as well as a small socarrat made by the housewives of Emperador. These gifts were also received by the Assessore Dott. Alfonso Tortora of the comune di San Lorenzello, the Assessore Dott. Valerio Martinelli del comune di Montopoli Val D’Arno and the Prefetto di Roma Dott. Matteo Piantidosi.

On 25 April last, a unique event in the history of this Basilica was held which, we hope to God, will continue to be held every year. The International City of San Lorenzo – San Lorenzo and its Association of Cities, whose president is Dr. Alfonso Guarino, was presented. The solemn mass was presided by Father Matteo Siro-Minister Provincial of the Immaculate Conception. The Association Huesca Cuna de San Lorenzo was also present from Spain, represented by its president Don Javier Lorenzo Monson Sos. He warmly welcomed the group of pilgrims coming from Valencia and Teruel.

The Valencian delegation was made up of Mrs. Vicenta García Alcover, who is preparing, together with the Museros Choir, a hymn for the pilgrim on the Way of the Holy Grail, Mrs. Ana Mafé García, president of the Association, its secretary Mr. Jesús Gimeno Peris, Mrs. Esther Santillana, responsible of the Centro Óptico Clínico Losan, company that sponsors the route, Mr. Armando de Lucas, international tourist consultant, Mr. Rafael López who supports the acts of celebration of the 20th Anniversary and Mr. Jose Cuñat, responsible for the media of the Association. They were accompanied from Teruel by the mayoress of Albentosa, Ms. Yolanda Salvador and Mr. Carlos Fuertes.

The international team of IVI-Naples formed by Mr. Salvatore Forte, Ms. Analissa Direttore and Mr. Francesco Falcone were also invited to the event.

It was a first class international meeting that was also attended by the Associazione Ente Culturale Schola Cantorum San Lorenzo Martire “Nicola Vigliotti” – San Lorenzello, through its president Don Alfonso Guarino and the Associazione Terre Di Presepi with Fabrizio Mandorlini as the person in charge of communication.

The event took place with a parade of banners in procession up to the main altar. Then the assembled associations from all over the world were invited to present their work. Dr. Mafé gave an emotional and didactic speech about the journey of the Holy Chalice from Jerusalem to Valencia.

After the conference, a solemn mass was celebrated with a cloister procession again with the banners and the Holy Chalice carried by Dr. Mafé to the main altar. A gesture reminiscent of the role of the women deaconesses of the early assembly in Rome who served the cup at the Paschal table.

“It was unique and wonderful to be able to bring a replica of that cup of blessing, of that Kos Kidush that he saved with his life, to the place where St. Lawrence rests,” said Dr. Mafé, visibly moved.

The ceremony was celebrated with a multitude of ecclesiastical representatives and pilgrimage credentials and socarrats were distributed among the attendees at lunchtime. A wonderful banquet was held in the cloister where we could all talk about San Lorenzo and the importance of the Way of the Holy Grail as a future European Cultural Itinerary. ” 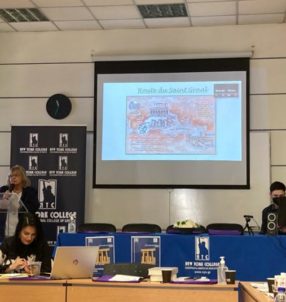