You are here: Home  /  Food  /  The best gastronomy and all the flavour of Mahou in València Cuina Oberta (November 11th to 21st)
Food 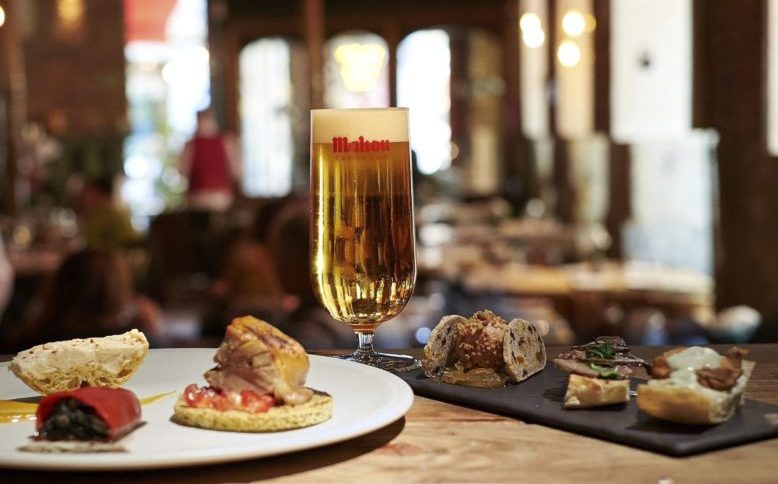 #Mahou collaborates in this edition of the gastronomic week accompanying exclusive tasting menus with the most awarded Spanish beer range in the world.

Diners will be able to enjoy this unique proposal from 11 to 21 November in some of the most outstanding restaurants in Valencia such as Baobab, La Sastrería, Lienzo and Bodega La Aldeana.

Foodies and gourmets are in luck because from 11 to 21 November València Cuina Oberta-Restaurant Week returns, the gastronomic proposal in which Mahou accompanies with the most awarded Spanish beer range in the world the exquisite tasting menus offered by the best restaurants at a very affordable price, a unique opportunity to taste the highest quality gastronomy in the city.

Mahou’s aim for this gastronomic week is to bring family and friends together around the tables of a selection of restaurants to taste the proposals of the best chefs. An experience that, in addition to promoting beer culture, hopes to surprise diners with new flavours and nuances that will show that meetings around beer and gastronomy make us live better.

In addition, those who pair their tasting menu with a third of Mahou Cinco Estrellas will be able to participate in a draw to win €50 worth of vouchers to be exchanged in shops affiliated to Visit Valencia. These prizes will be won by validating the pincodes that will be given out with each drink on the website www.mahou.es/cuinaoberta

This initiative is completed with a draw for tasting menus for two people from 11 November onwards on the Instagram accounts elsaishungry, Adrián Mora Maroto and dosfoodiesymedio.

The collaboration with València Cuina Oberta reinforces Mahou’s support for the hotel and catering industry, which is in full revival, as well as promoting quality encounters around gastronomy and brewing excellence.

Mahou is a family of beers born in Amaniel street in Madrid in 1890. It is the result of the work of pioneers and master brewers who, for over 130 years, have been seeking to share flavours and new experiences.

Mahou develops beer culture based on rigorous quality processes and the best ingredients to give its products an unmistakable flavour. Experience, passion and quality have driven Mahou to continue growing and innovating, to offer consumers a wide portfolio of brands such as Clásica, Cinco Estrellas, Sin, Maestra, Barrica, 0.0 Tostada, Session IPA, Casimiro Mahou, Sin Gluten, Radler…

Since 2018, Mahou is the most awarded Spanish beer range in the world, an international recognition of its excellence and brewing expertise, as well as its exceptional taste.

100% Spanish family-owned company, leader in the Spanish beer sector with a production share of more than 32%. It has 10 brewing centres -eight in Spain and two in the USA-, four water springs with their bottling plants and a team of around 4,000 professionals. It has more than 130 years of history, beginning with the birth of Mahou in 1890. In 2000, Mahou acquired San Miguel. In 2004, it incorporated the Canary Islands brand Reina and, in 2007, Cervezas Alhambra. During the last decade, it has diversified its business with the purchase in 2011 of Solán de Cabras, and the entry into new categories such as cider in 2020.

It has a broad portfolio of domestic beers, including Mahou Cinco Estrellas, San Miguel Especial and Alhambra Reserva 1925; pioneering products in their category, such as San Miguel 0.0, San Miguel ECO, Mahou Barrica and brands suitable for coeliacs such as San Miguel Gluten Free and Mahou Cinco Estrellas Sin Gluten. It also has a wide range of international beers and water brands such as Solán de Cabras. Internationalisation is one of the strategic axes for the development of its business. It produces more than 70% of the Spanish beer consumed outside Spain and is present in more than 70 countries.