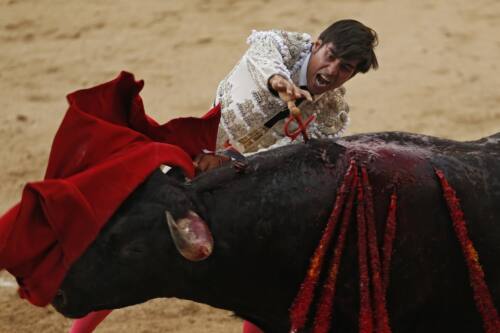 ##Many an article did I read whilst researching this piece on the part that all those bloody tourists play in funding the modern Spanish bullfight. Three rows back from us at one fight were a family of  tourists complete with beef burger meals to enjoy the show with. In fact, they paid more attention to what type of milkshake they had than to the gore that unfolded in front of us.

It wasn’t just those tourists making up the numbers of the audience in that plaza. As a bullfight virgin myself, I had expected the audience to consist of mostly Spanish. But quite a large proportion of the spectators were adolescents and younger adults, both male and female, busily texting as they love to do all over the Western World. And, of course, there were the foreigners like me.

“I don’t need to go to a bullfight to know that it is a cruel and sick thing” was mainly the response from people when I told them about my evening plans and asked if they would like to join me. True, I already believed the fight, or “fiesta nacional” as it’s known, to be quite violent—almost barbaric—but I needed to see exactly what went on and to understand what the whole thing was about.

Each year, an average 24,000 bulls are slaughtered in front of an audience of 30 million across Spain during the season, which runs from March to October. It’s no recent invention. The Bible cites bull sacrifices taking place, and ancient Iberians were known to hold such ceremonies in temples (similar to today’s bullring).

Bullfighting as it’s now known in Spain used to take place in the village squares. The first official building wasn’t built until the 18th century in Ronda, where Pedro Romero once reigned (in the process slaying over 5,000 bulls). It was in Ronda that a certain sequence of events developed which is still followed today. Prior to this it had been a sport reserved for the aristocracy and mainly carried out on horseback although it was Felipe V who banned the nobles from doing it, deeming it to be ungentlemanly. Local people embraced the sport and took up the taunting and stabbing of the bulls in the streets and squares of villages instead. In 1724, it was transformed from horseback onto foot. The focus nowadays is on the matador’s judgement of the bull’s strength and anticipation of its next move.

As I guiltily purchased my ticket from the stalls I was asked whether I wanted to sit in the sun or shade, the latter of course more expensive, but for a two hour performance I parted with 10 euros for a spot in the sun. You could even buy flowers once inside to hurl at the matador once he has killed the bull to show your admiration (I resisted this urge).

And so the sequence began with the sound of the first horn signaling the entrance of all those taking part in the fight parading around the ring for all to see, this more commonly known as Paseillo.

The Puerta de los Toriles is the next step with the two Alguacilillos (men on horseback) opening the doors to let in the first bull. It is often said that the bulls have already, by this point, been weakened by drugs, their horns sometimes shaved to throw them off balance and often kept in darkness to blind and disorientate them all the more as they burst into the ring’s sunlight.

The three Tercios are the three main parts, or ‘acts’ you could say, of the fight, each separated by the sounding of a horn.

The first involves the display of the picadors (those on foot dancing around the bull complete with cape) getting him into a good position for those picadors mounted on horseback to lance him in the back. Horses wear heavy padding to protect them as they often bear the brunt of the bull’s anger although one horse was practically flattened against the wall by the bull and of little use seemed the padding.

The second part, the Suerte de Banderillas is where the real pain begins with the three banderilleros sticking a pair of spears or banderillas into the bull’s back (the aim being to loser the bull’s head in preparation for the kill by the matador in the final segment). The bull seemed to be tiring now, coming for more and more spears in the neck, a horrid thing to watch as his anger escalated and his energy faded.

The third part, the Suerte Suprema, is where the real matador struts his stuff, using the muleta (small red flag) to demonstrate his control over the bull with an artistic display of human dominance. The fact that the bull is now bleeding heavily and utterly exhausted seems to put it at a slight disadvantage.

The final killing is by far the worst. The matador will stab the bull with his sword in the back of the head and neck as many times as necessary to bring it to its knees and final death. As we watched the blood pouring out of its mouth and the matador wiggling its swords for extra measure, I was by now truly horrified, if I hadn’t been before. Once the bull had exhaled its last breath and deposited a large pile of excrement on the groomed surface of the ring, the matador began his round, catching the flowers that were thrown in adoration and blowing kisses at the ladies. The horses meanwhile galloped in, their ploughs harnessing the bull by its horns and dragging it across the ring in a bloody trail. By now it was time for me to leave after lasting just 20 minutes of my two-and-a-half-hour ticket.

As I stumbled down the steps and out of the ring, I felt both stunned and shocked at quite how brutal the whole thing had seemed, only to be met by a view of the recently killed bull being sliced and diced by well-clad men. No doubt his testicles would end up on someone’s plate. It was time for a swift drink. I decided to skip the tapas this time!