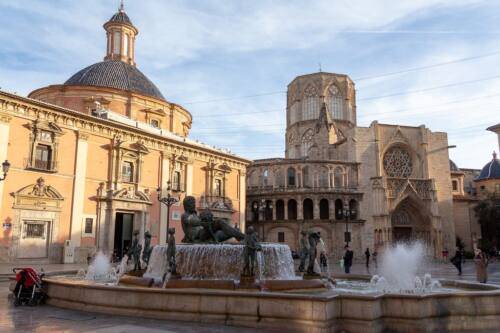 ##Built at the city’s highest point, Valencia Cathedral – or to give it its full name, the Santa Iglesia Catedral Basilica Metropolitana de Santa María – does not quite dominate the skyline as much as its grand title might suggest. If it wasn’t for the great Miguelete bell tower you’d hardly know it was a cathedral at all.

The building itself looks like someone has gone mad with an ancient set of Lego bricks, a marvellous mishmash of styles with the Miguelete stuck on at one corner and the Basilica glued onto the other. But then, of course, that is its charm. It stands as a rambling but dignified old gateway between the buses and the tourist bars on the Plaza de la Reina and the delights of the ramshackle dusty streets of the Barrio del Carmen. And all this on a site which has been the focal point and spiritual heart of the city for more than two thousand years.

Today’s Cathedral is just latest in a long line of places of worship which have stood on this site. The site has been ripped up and had more makeovers than the modern city centre’s ever-changing roadside pavements. The constant stream of different governors, kings, sultans, princes and other assorted ruffians who ruled the city over the centuries came along, decided they didn’t quite like what the previous owners had done to the place, knocked everything down and rebuilt things to the glory of their particular God.

The first of these was the Temple of Diana built by the Romans in 138 BC which was in turn destroyed by Pompey and replaced by a temple to the goddess Fortuna. Engravings from the temple dating back to the first century BC can be seen on the side of the Basilica and within those walls poor St. Vincent the Martyr was finally left to die.

Then came the Visigoths who, true to their penchant for knocking down any Roman buildings they came across, smashed everything up and built the first Christian Cathedral on this site, the Cathedral del Santísimo Salvador. It was here in 584 that King Leovigild locked up his own son St. Hermenegild for ten years over a little argument they had one day about religion, but hey that’s the Visigoths for you.

The Moors came next and did some major alterations in order to construct the Great Mosque of Balansiya which stayed around for 500 years between the 8th and 13th centuries with a brief interlude from 1095 to 1102 when El Cid and his beautiful wife Sophia Loren (Jimena Díaz) moved in for a while and briefly changed it back to a Christian church.

Apart from a bit of paint work here and there, they didn’t do much with it and the place was handed back to the Moors largely unaltered. Columns from the Moorish mosque can still be seen in the Almoina ruins exhibition behind the Cathedral. Almost everything else was destroyed by King Jaume I and his knights when they re-conquered Valencia for the Christians in 1235.

Building didn’t start on the present day Cathedral until 1262. In a rush to hit home the changeover from Muslim rule, Jaume had the Mihrab (the holiest part of the old mosque) replaced with a Romanesque style doorway brought down from Lleida. It remains in place to this day opposite the bishop’s palace, still facing Mecca.

Built and rebuilt over eight centuries, the modern day cathedral lacks the stately symmetry favoured by the world’s great religious buildings and was squeezed in here and there amongst narrow medieval streets. It was never meant to be set off by the big squares which now border it. The Plaza de la Reina is relatively modern and was cleared less than 100 years ago and the Plaza de la Virgen on the other side used to be only one third of its present size until recently. Because of this, the Cathedral doesn’t seem to have any obvious front or back and no grandiose main entrance. There are, however, three main doors and this being Valencia Cathedral, each door is built in a completely different style.

Along with Jaume’s Romanesque Portal del Palau, there is the Gothic Portal de les Apóstoles tucked away in the corner of the Plaza de la Virgen where the Tribunal de les Aigues (Water Court) meets every Thursday. It is decorated with images of the apostles and incorporates a Star of David in the window, slipped in by the Jewish craftsmen who built it. The third door is the Baroque Portal deis Ferros in reference to its iron gates on the Plaza de la Reina. Its doors are decorated with the Sun and Moon, one of the reasons the Cathedral is sometimes dubbed the Sol i Lluna. In keeping with the Cathedral’s chaotic style, it doesn’t face directly out to the square but is best viewed from the windows of the McDonald’s restaurant.

Inside the Cathedral, surrounded by a further hotchpotch of different architectural styles, there’s something for everyone. Amongst the beautiful and valuable works of art is the recently revealed Renaissance fresco depicting angels playing musical instruments and looking only slightly more angelic than a typical Valencia marching band in Fallas at 5 o’clock in the morning. The fresco was covered up and forgotten for centuries until some cleaners uncovered it five years ago while trying to remove a pigeon’s nest. You can also contemplate the very pulpit where St. Vincent Ferrer harangued his congregation and probably performed one or two of his nearly 900 accredited miracles, in the late 14th and early 15th century.

Round the back, for those with a more macabre bent or perhaps for medical students, you can view the withered arm of the other, less fortunate St. Vincent the Martyr. And then, for any of you who happen to be Dan Brown, Indiana Jones or one of the knights of the Round Table, there is the prize asset, the Holly Grail housed in its own chapel. The chapel also displays the chains from the port gates of Marseille and the hammer which broke them down that were brought back by Alfonso the Magnanimous after conquering the city in 1423.

During the 2007 America’s Cup, the mayor of Marseille asked Valencia mayor Rita Barberá for the return of part of the chains. The request fell on deaf ears but he did take back a litre of horchata and commemorative box of turrón de Alicante.