You are here: Home  /  Places  /  THE HISTORIC CENTRE OF VALENCIA…
Places 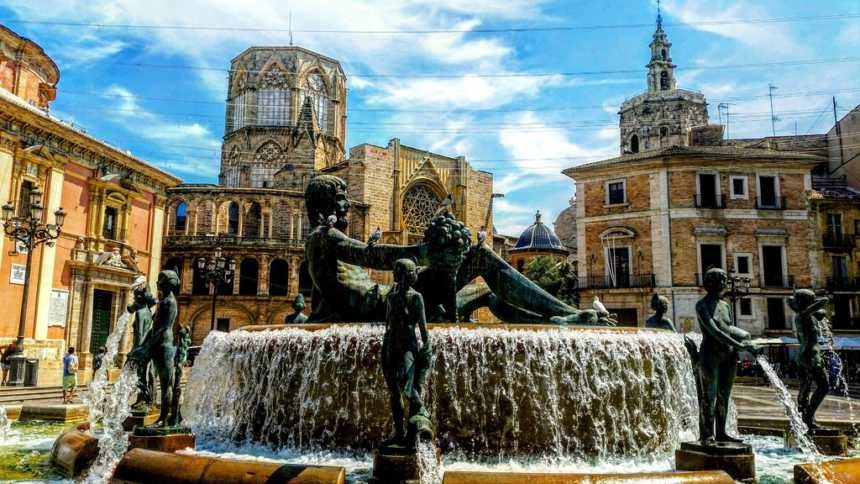 THE HISTORIC CENTRE OF VALENCIA…

Intrigue and murder. Love and conquest. Not every city centre can boast such risqué history and then rise up to become beloved by residents and visitors alike. The City Centre of Valencia could, and she did.

Rewind the clock to 138 B.C. to discover how the heart of Valencia morphed from a swampy island on the river Turia to today’s bustling business district and renowned tourist attraction. It started with the Romans, like so many histories have. The victorious Roman Consul, Decimus Junius Brutus Callaicus envisioned creating a retirement region for his oh-so-faithful, yet aging soldiers. No Iberian, Greek or Phoenician city for his men! Decimus wanted to honour them with a “true” Roman city, so he founded Valentia Edetanorum, “the city for the valiant”. Each soldier was granted a plot of land to plant olives and grapes, as well as themselves. (Just think: Today’s vibrant City Centre was first tended by a band of merry old men!)

Life was good, good indeed, until civil war erupted. Unfortunately, Valencians backed the wrong faction, which started their run of bad luck. Pompey’s revenge soon followed. His payback was the usual—assassination, torture and public execution—as well as total destruction of the region. Valencia was not only devastated; it was abandoned for 50 years. (Oh, to have bought a few acres back then!)

The Caesars eventually returned to power, and Emperor Augustus rebuilt Valencia in all Rome’s glory. A magnificent, enviable city emerged, complete with a grand Forum and an equally grand circus seating 10,000. (How do we know this? Excavations behind the Cathedral in the heart of the Old City took place in the 1980s. This Almoina dig unearthed artifacts, as well as new historical facts. Today, the excavation site is accessed through the Almoina Architectural Museum in the Plaza Decimo Junio Bruto.) More information: https://247valencia.com/roman-valencia/

Back to the Romans … who were followed by the Goths (think medieval, not punk) … the Visigoths … and then the Moors. Tales of terror preceded Moorish General Tariq Ibn Ziyad, who conquered enemies with the same zeal that empowered his epic advancement from slave to general. With wisdom grounded in fear, the Visigoths handed over Valencia to General Tariq on a silver platter. This power shift was for Valencia’s ultimate benefit. Under the Moors’ rule, the city really began to flourish.

The Moorish kings built elaborate irrigation systems with knowledge gleaned from North Africa. By rechanneling the “white river” (today’s Turia) and the “ferocious river” (today’s Xúcar), they transformed the region into fruitful farmland for sugar cane, almonds, pulses, vegetables and even rice. Valencia’s agriculture grew, and a century or so later, so did its handcrafted products. Skilled craftsmen learned to perfect silks, furniture and multi-coloured ceramics inspired by the Moorish culture.

Next came Christian conquest, persecution of the Jews, the eventual expulsion of the Moors and Black Death. Around the 14th century, the Valencians decided to protect their holdings by surrounding the city with fortified walls, grandiose gates and towers. (Ironically, one formidable gate no longer keeps visitors out. Restored in 1930, Torres de Serranos now welcomes visitors to the City Centre.) More info:https://247valencia.com/jewish-valencia/

Thankfully, the 15th century ushered in years of prosperity (¡salud!). The infamous Borgias family’s power was evident from Valencia to Rome, as was an undercurrent of incest, nepotism and murder. Surprisingly, these patrons of the arts also delivered many of life’s finer things. More info: https://247valencia.com/the-borgias-valencias-most-infamous-family/

The dramas continued, century after century, but your lunchbreak or vacation wanes. So, let’s fast forward and explore more specifically how you can make history today!

Take a stroll through meandering barrios. Photograph ancient buildings repurposed in ingenious ways. Browse this shop and the next for a souvenir or two. Find a park bench for mid-day’s rest or check out a bar for sundown’s excitement.

José Cámara, Euroace’s Co-founder and Director of Programs, knows the area well. He is a Valencian resident, as well as a Director at a Spanish language school. He graciously shared a few of his City Centre faves.

ATTRACTIONS
 Valencia Cathedral: This legendary landmark—a blend of Gothic, Baroque and Neoclassic architectural styles—comes with a challenge. If you climb 207 steps to the Micalet (bell tower), you’ll discover magnificent views of the city. Also try to find the ‘Star of David’ that Jewish craftsmen cleverly incorporated in a window (the Christians never recognized it, though in plain sight!) It remains one of few remaining visible signs of Jewish Valencia. More info: https://247valencia.com/valencia-cathedral/

 Mercado Central (Central Market) immerses you in all that is Valencian. Stroll among stalls of fragrant spices and baked goods, fresh fish and cured hams, enticing cheeses and wines. (Great place to meet up for freshly brewed café). More info:https://247valencia.com/mercado-central/

 La Lonja (Silk Exchange) is touted as a National Historic and Artistic Monument, as well as a World Heritage Site. That goes to say, be prepared to be amazed by grandeur, soaring ceilings and powerful opulence of Valencia’s former mercantile exchange. More info:https://247valencia.com/la-lonja-of-valencia/

 Centre del Carme Cultura Contemporània, constructed in 1281 by Christian conquerors, was originally Valencia’s Royal Monastery of Our Lady of the Carmen. Today its interior and garden spaces host a wide range of artistic expressions and practices, plus occasional festivals of culture. https://www.consorcimuseus.gva.es/centro-del-carmen/exposiciones/?lang=es

 IVAM (Institut Valencià d’ Art Modern) transports visitors to a more futuristic perspective. Its modern art features impressionist paintings by local artists, wrought-iron works by a Catalan sculptor and more! (The building itself is a work of art, too.) https://www.ivam.es/en/

RETAIL
 Lavespa Roja steps back in time with fashions and gotta-have accessories from yesteryear. You can also enjoy a chat with the owner, who loves anything and everything vintage. https://www.facebook.com/lavesparoja

 Santo Spirito Vintage is unabashedly hip with vintage trends and custom-designed apparel. Make this your stop if you’re in search of super-cool sunglasses or a coat with a story. https://www.facebook.com/SantoSpiritoVintage

Of course, Valencia’s Historic Centre serves up a flavourful range of food and beverage options, too — from traditional cafes to eclectic restaurants, and enticing bar terraces to pulsating nightclubs. All welcome friends old and new, many well into the night! Visit our https://linktr.ee/247valencia for more information…

José appreciates the Historic Centre’s variety and feels certain you will, too. “It’s very big and pleasant, yet safe”, he said. “You can walk through lovely squares and narrow streets, take a coffee surrounded by beautiful old buildings or join young people enjoying the nightlife. In the City Centre, you feel part of the history of Valencia!”