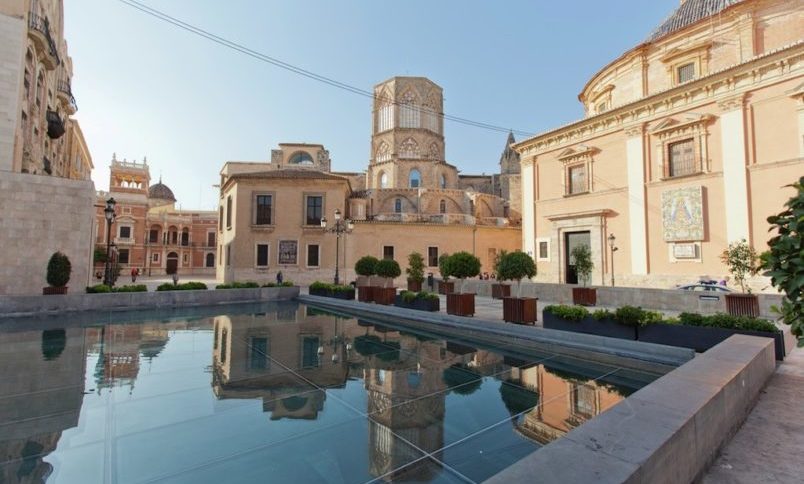 ##It was the Romans who started it all. Before them, Valencia was just a swampy island on the river Turia. The early history of the city was always pretty sketchy but the excavation of the Almoina site behind the Plaza de la Virgen Basilica in 1985 changed all this…giving us information about the city’s beginnings and painting a clearer picture of Roman Valencia.

The city was founded in the year 138 BC as a kind of retirement home for old soldiers! Victorious Roman Consul, Decimo Junio Bruto Galaico (played by multi-Goya winning actor Luis Tosar in the film “Galaicus”) wanted to reward the veterans from his successful campaigns in Lusitania. He founded Valentia Edetanorum “the city of the valiant” and gave each of them a plot of land on an island in the river Turia (or Tyris as it was known to the local Iberians).

To get a picture of how the land lay on the site of the city 2000 years ago, what is now the city centre was surrounded by the river, which followed the course of today’s riverbed park on one side. On the other, a second branch of the Turia, which forked off at more or less the modern site of the Puente de las Artes. Flowing through Bolsería, and the Plaza del Mercado Central, where it formed a small lake. Through the Ayuntamiento and down Calle Barcas and Pintor Sorolla towards Plaza Tetuan and the Glorieta. There it re-joined the main river at what is now the Puente del Real.

Unlike its more established neighbours like Sagunto, Lliria or Xativa, which had been around for centuries, Valencia was a purely Roman construction on what had been previously agricultural land. This fell in with Roman policy of making a clean break with the Iberians, Greeks and Phoenicians who had founded and controlled the other cities and Valencia, the true Roman city, was given increasing importance in the region at the expense of its neighbours.

But just when things were going so well, death, disaster and destruction were just around the corner. Not for the last time in its history, the city of Valencia backed the losing Republic side in a civil war and suffered the reprisals. General Quintus Setorius stood against the new regime in Rome and attempted to set up an independent Roman republic in Hispania.

The city of Valencia was amongst those who supported him but, after his assassination, his forces were crushed by Pompey. The revenge of Pompey was brutal.  Valencia was destroyed by Pompey’s forces. The Almoina excavation in the 1980s uncovered weapons used in the battle in which thousands died. 14 skeletons were found showing symptoms of horrible torture, some with limbs amputated and others that had been impaled alive. These were prisoners who had been publically executed in order to terrorise what was left of the population and to stand as an example to other cities.

The city lay abandoned for more than fifty years but with the power of the Caesars restored, Emperor Augustus rebuilt the city, increasing its size and importance and establishing the first great city of Valencia. A grand Forum was built under what is now the Basilica. A huge Circus, the size of three football pitches and with a capacity for more than 10,000 people, was erected stretching down from where the Comisiones Obreros building stands today in Plaza de Nápoles y Sicilia, crossing Calle de la Paz all the way to the Plaza del Patriarca. The City prospered and became the most important Roman metropolis in the region.

Roman Valencia was a walled city with four gates at the Cardinal points and a bridge where the Puente de la Trinidad (the one that goes across to C/Alboraya) stands today. One gate in the Plaza de la Reina (more or less directly under Finnegans), one in Calle Salvador (remains of which will soon be on display in a basement next to the church) another in Calle Caballeros and a fourth in Calle Avellanas (remains of which can be seen at number 14, through a specially built window at street level).

Despite its ancient grandeur, not much was known for certain about Roman Valencia until the 1980s when work started on the Almoina dig right in the heart of the City behind the Cathedral. This unlocked many of the secrets of Valentia including the destruction by Pompey and its subsequent rebuilding.

You can visit the site of the excavation at the Almoina Archaeological Museum in Plaza Decimo Junio Bruto (from the Plaza de la Virgen, just go under the arch between the Cathedral and the Basilica). It’s like travelling back in time as you see the steps under the square. You can see the Roman streets towards what was the Roman Forum where you can see remains of its columns, porticoes and capitals. There are parts of a temple and grain store and there are even remains of the cold water and hot water baths and the changing rooms, which date back to the original Republican Valentia and were constructed as far back as 120 BC.

If you are looking for other evidence of the Romans around the city, some ancient Roman plaques dating back from the first and second centuries BC have been used to decorate the Plaza de la Virgen façade of the Basilica (more or less at floor level). You can also see parts of the circus in the church of San Juan del Hospital and in the basement of the Caro Hotel at 14, Calle del Almirante. There are also numerous artefacts and ceramics in the various museums around Valencia, particularly in the Museo de la Ciudad and the Centro Cultural de la Beneficencia.

The ancient Roman city was of course rebuilt and built over again by the Goths, Visigoths, Muslims, Christians, Borgias, Carlists, Republicans, Francoists, Bautista Soler, Rita Barbera and left-wing politician Giuseppe Grezzi with his bike paths… but it was the Romans who founded Valencia and it was their name for it that stuck.