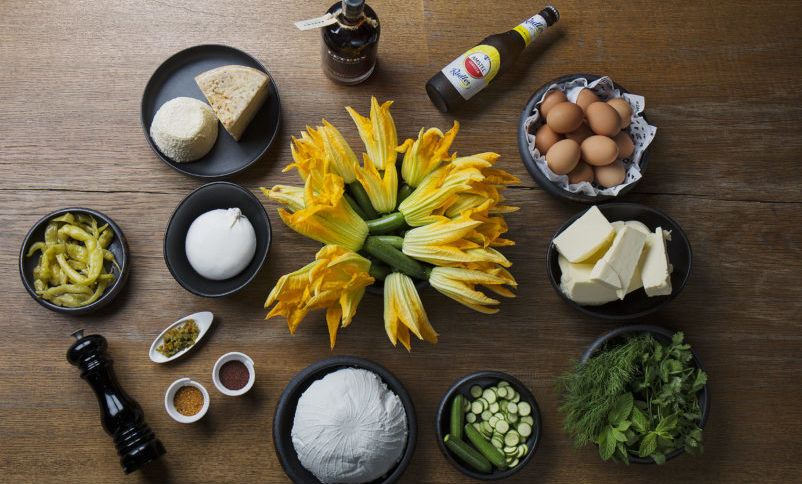 ##The National Gastronomy Award and the brewery propose a recipe that explores the limits and coincides with the adventurous spirit of summer days. A culinary creation that can be enjoyed in one of Camarena’s restaurants, Canalla Bistro, and in its delivery service, with the collaboration of Amstel, during the month of July.

Citrus, sweet and spicy notes, a contrast of crunchy and creamy textures, plus a surprising combination of flavours in the ‘Amstel Radler tempura stuffed zucchini flower.’

Amstel Radler and Camarena also put at the service of food lovers the recipe to renew their menus and prepare this proposal, which offers a daring look at local products, with innovative character and a sustainable perspective.

With the arrival of the hottest season of the year, an extra dose of mental and physical freshness is needed, which is what ‘El sabor del verano’ proposes. This is the new creation of Ricard Camarena and Amstel Radler. The National Gastronomy Award and ‘Chef of the Year’ in the last edition of Madrid Fusion, joins forces with Amstel Radler to present a recipe that explores the limits and connects with the adventurous spirit of summer days.

The new proposal will be on the menu at ‘Canalla Bistro’ during the month of July 2021, including a raffle for a dinner for two among those who try it and upload a photo to Instagram, tagging the restaurant and Amstel, as well as using the hashtag #elsabordelverano. It will also be available in the delivery service and every Thursday in July, customers will receive two free Amstel Radler Tostada 0,0 when they order this new creation.

This is ‘Zucchini flower stuffed with Amstel Radler tempura’, a recipe that invites you to break preconceived ideas, taking a new look at local products. “Everyone knows zucchini, a vegetable that is now in season. But in Spain they are not usually eaten when they have just flowered and are still small. The flavour is concentrated in a much more consistent pulp and you can take advantage of its flower petals, which invite you to open your mind and play with them in the kitchen,” says the chef.

It is the same innovative character of the brewery, a pioneer in introducing in Spain the typical custom of Bavaria (Germany), consisting of mixing beer with lemonade to offer it at their stops to the many cyclists in the area. But Amstel wanted to take it to ‘the taste of doing it right’, with its characteristic commitment to authenticity and naturalness. Its recipe has 40% Amstel Original, a 100% malt lager, and 60% pure lemon juice. The result is Amstel Radler, a natural, refreshing and low alcohol content drink, which has created a school and has continued to evolve, with its 0.0 version and Amstel Radler Tostada 0.0. This variant satisfies lovers of toasted malt and full-bodied beers, while adding a touch of lime to the lemon juice. The result is a very refreshing and balanced non-alcoholic beverage that gives a modern and personal touch to the German tradition.

SUMMER TASTES OF CLOSENESS, CONTRAST AND CREATIVITY
Aromatic herbs, a mixture of cheeses, spicy, sweet and sour touches or exotic spices, in addition to the contrast of crunchy and creamy textures, are found in the recipe created by Camarena, who elevates the classic dish with a dough in which the Amstel Radler itself serves as a base.

The Valencian chef is characterized by a very personal and versatile culinary style, which looks at traditional recipes and products to give them a twist, mixing them with gastronomic legacies from other corners of the world in ‘Canalla Bistro’, one of the four restaurants he has in Valencia. A commitment to the ‘glocal’ typical of those who work with gastronomy from a strong awareness of the current context. “Although this is our most cosmopolitan restaurant, we continue to look to the land, to ‘la huerta’, to what we have nearby and what defines us. I am very clear that the future and the present is most effective via sustainability. That’s why we work with km0 products, in collaboration with local producers”, explains the Valencian chef, awarded the Michelin Green Star for bringing his environmental awareness to the hotel and catering business.

It is another meeting point with Amstel, which combines the experience of belonging to an international brewing family like HEINEKEN with the roots of being the only major brand brewery that produces its products in the Comunitat, with a relationship with the territory that dates back to the old factory of El Cabanyal and that makes ‘Amstel Made in Valencia’, a km0 product. Today, Amstel has state-of-the-art facilities in Quart de Poblet, where the philosophy of ‘making beers that please the world, people and the planet’ is embodied through initiatives such as the implementation of a circular economy system with zero waste to landfill or the use of renewable energies to make its beers with the power of the sun.

Combining the rootedness to the territory with international learning and environmental awareness, Amstel and Camarena launch a proposal that encourages to change our points of view, to open our eyes, the palate and all the senses. A culinary creation that appeals to the passion for discovering new experiences, that ‘taste of summer’ that, this season especially, appeals more than ever.

In a bowl, put the cheeses (fresh mozzarella, grated cured cheese and ricotta) and work with your hands until you get a consistent mixture. Add the spices, the chili pepper mince and the herb mixture.

Put the filling in a piping bag and pipe it into the zucchini flowers. Join the tips of the petals to close and set aside.

In parallel, mix the Amstel Radler tempura ingredients to obtain a liquid batter, but with a certain consistency, where we will dip the stuffed zucchini flowers upside down, holding them by the end of the vegetable.

Fry the battered flowers, avoiding contact between them and browning all their sides to generate a crispy layer containing the melted cheese inside. Set aside in a bowl with absorbent paper.
Arrange the Amstel Radler tempura flowers on a plate and cut them lengthwise. Pour hollandaise sauce and vinaigrette on top, to taste. Garnish with sumac powder and herb mince.
Once the presentation is complete, serve at room temperature, accompanied by a cold Amstel Radler.

Following the German tradition, this Amstel proposal combines 40% beer – in this case, a 100% malt lager – with 60% lemon, for which pure juice is used. The result is a natural drink, with an alcohol content of only 2°, very refreshing and with a mild flavour.

Its citric tone highlights the concentrated flavor of the zucchini blossom and finds a curious counterpoint in the milky cheese mixture as well as in the herbal touches of the dressing proposed by Camarena.

This beer’s drink, subtly acidic and very fresh, is also a bit cloudy when discovering the fruit pulp. Organoleptic qualities that lighten the trace of frying in the mouth. In addition, it contrasts with the crunchy and creamy texture of the zucchini flower in tempura.

The result is a fresh pairing, full of surprises, that breaks the canons to focus on natural, refreshing and original flavours, like Amstel Radler and like Ricard Camarena’s cuisine for Canalla Bistro.

About Amstel ‘Made in Valencia’

Amstel is a beer brewed with 100% barley malt and more than 100 years of brewing tradition. Its link with Valencia dates back to the 50’s, to the emblematic brewery in the neighborhood of El Cabanyal. In the 1970s it moved to Quart de Poblet, where it has facilities that produce the equivalent of 1,200 million beers a year. This makes it the only large brewery that produces its products in the Valencian Community, with a social and economic contribution that is reflected, for example, in the creation and maintenance of 350 direct jobs and 12,000 indirect jobs.
Amstel’s link with Valencia also lies in the fact that the recipe for Amstel Original is the work of the Valencian master brewer Rafael Sánchez. Using a process known as “late hopping”, he incorporates Perlé hops at the end of the brewing process to intensify both the aroma and the flavour and colour of the beer. The result is a quality that has brought it recognition in competitions such as the World Beer Awards, in the latest edition of which it received the gold medal for Best Beer in Spain in the Lager category.

In 2020, taking advantage of the national renewal of the image of Amstel Original (the interior remains intact because the quality is not touched), the close relationship of this beer with Valencia has been reflected by creating a ‘new Valencian image’, exclusive for the thirds that are distributed in the province. Its design highlights Amstel’s Valencian origin and character.
Along with Amstel Original, 100% barley malt, the Amstel family includes Amstel Radler, with natural lemon juice. Also Amstel Oro, a three-stage roasted malt beer. It is another recipe from Valencian brewmaster Rafael Sánchez and has been recognized as Best Beer in Spain, this time in the Lager Pilsener category at the World Beer Awards 2020.