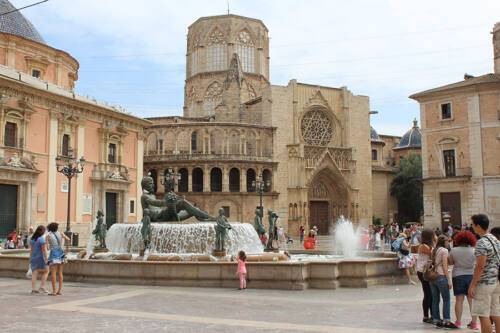 There is a long and tragic history associated with the presence of Judaism in Valencia. At its height, during the Medieval period, Valencia had one of the largest and most prominent Jewish communities in the Iberian Peninsula. Under Moorish reign, the Jews that resided here were held under restrictions and laws that forbade them from holding positions of power/authority over any Muslim. Despite the restrictions, there was still a rather flourishing and established Jewish community in Valencia.

At the time of the Christian Reconquest regarding the Moors in 1238 A.D., an estimated 2,000 Jews were living here. Jewish families made up about 9% of the population in Valencia at this time. These families typically worked in agriculture or as craftsmen. However, many were also employed as tax collectors, civic administrators or, in one case, as the chief advisor to the King. Shortly after, in 1244, Jews were granted the whole eastern-quarter where the Santa Catalina Church stands today. This was known as the “Jew Gate”, which led to the Jewish Cemetery.

Today, the former Jewish cemetery is now the location of an ‘El Corte Ingles’ shopping mall. However, the destruction of the physical evidence of Sephardic Valencia has not killed its strong influence and spirit. The influence is recognized on Calle Luis Vives, a street named after the famous Jewish scholar and humanist, Juan Luis Vives. The spirit is possibly felt the strongest around Calle Del Mar, the site of the former Jewish Quarter.

For a period within time in this once expansive quarter, the Jews had many freedoms. The community was permitted to judge lawsuits according to Jewish law and Jewish prisoners were granted to return home on Shabbat (Sabbath). However, even during these seemingly promising times, the Jewish community was still subject to restrictive policies by the Christian royalty. Such policies included: high taxes, regulations on oaths, and the order for Jews to wear a signifying “cloak.” In 1283, their freedom was further restricted as King Pedro (Peter III of Aragon) dictated that no Jew should hold any public office over Christians. In the 1370s, with rising tensions, King Peter IV of Aragon imposed that Jews were only permitted to live inside the Juderia.

Violence exploded on July 9th, 1391 when a group of young Christians infiltrated the Jewish Quarter. This attack is known as the Massacre of 1391: an anti-Semitic act where Jewish homes were ransacked and robbed, Jewish women were abused in their homes, and at least 250 people were killed in the bloodshed. Many Jews accepted a forced baptism to Christianity to escape certain death while others fled the area. This historically marked the end of the once-prominent Jewish presence in Valencia. Justice was never served since some of the guilty parties came from wealthy and powerful Christian families. The Jewish community and much of the culture was essentially wiped out. Nothing from the quarter had survived from the Massacres of 1391. The three known synagogues were either destroyed or turned into churches before the 15th century, including the once esteemed synagogue which was converted into a monastery known as the Church of San Cristóbal. This tragic and senseless event was the main factor of what wiped out much of the presence of Jewish Valencia. Furthermore, Jews were no longer permitted to enter the city for longer than eight days.

The times of terror were far from over as less than a century later the Spanish Inquisition began. With the inquisition came the brutal banishment of Jewish life and culture, which in effect wiped out hundreds of years of unique Sephardic culture. These were increasingly dangerous times for Jewish people. Then came the Alhambra Decree of 1492. This, also known as the Edict of Expulsion, was issued on March 31st by representatives for the Catholics of Spain. This edict prohibited the practice of Judaism. With this, over 200,000 Jews converted to Catholicism while many other thousands were expelled from Spain, forcing Jews out of the country.

As feature writers David Rhead & José Marín wrote in a previous ‘24/7 Valencia’ article about history:“Despite the prejudices of the time, two Valencians of Jewish origin ended up playing a key role in renaissance Europe. One of them, Luis Vives, a true Renaissance man helped to develop the ideas that formed modern Europe. The other, Luis de Santangel, was instrumental in the discovery of America. Both triumphed as “Christians” having to pragmatically keep their true faith secret and both ended up being buried in Christian churches.”

The only option for those who wanted to preserve their religion and culture was to flee. This led to Valencia becoming a “port of embarkation” for those being pushed out and forced to relocate their homes. This edict was revoked in 1968.

Around the 19th Century, some Jews started to slowly return to Spain as synagogues were opening in Madrid. Synagogues closed again during the Spanish Civil War in the years of 1936 to 1939. Jewish life returned public in 1947. Around this time, more Jewish people returned from Europe and North Africa. Spain was neutral during World War II, which led to over 25,000 Jews coming to Spain with the promise of protection and citizenship for Eastern European Jews. Many Jews fled to Spain during this time. Spain was a place for refuge during this war and, after 1945; Barcelona became the main refugee centre.

The Jewish community was officially re-established in Valencia in the 1970s and the city is now home to a thriving Jewish society centred around education, worship and community. Juan Luis Vives would be proud to see it. The Jewish Masorti community known as ‘Aviv’ began in 2004. This modern community encourages all of the Jewish faith to integrate tradition and history into their lifestyles for a fulfilling and close-knit connection to each other. This Community focuses on education, activities, and festivals. Some classes and activities are offered that inform people on history, culture, and religion. For example, there are holiday celebrations, classes to prepare children for their Bar or Bat Mitzvahs and Hebrew courses. Those interested in connecting with their roots or simply learning more about the rich Jewish culture in Valencia should visit the website: https://masortiolami.org

In 1996 the “Network of Jewish Spanish Quarters” was created. These are a collection of 18 cities that help promote the knowledge and tourism of Jewish areas in Spain. These municipalities have architecture, cultural, and historical Jewish heritage in them. This organization focuses on defending and celebrating Jewish culture internationally by spreading knowledge of the Jewish people and their traditions.

Today, there are an estimated 50,000 Spanish Jews, with most in Madrid and Barcelona. Much of this population are Jews who have returned to Spain seeking refuge from exile in Morocco. A recent study shows that about 20% of Spanish people have Jewish descent. Just recently, in 2014, Sephardic Jews were granted Spanish Citizenship without having to live in Spain after being expelled in 1492.

The award-winning Valencian musician  Mara Aranda is keeping the Sephardic Jewish tradition very much alive (on record and in concert) with her trilogy of extensively researched albums dealing with Jewish Spain and the diaspora that settled in Turkey & Morocco that was created by the expulsion of Jews from their homeland of Spain.

24/7 Valencia:  Where does your interest come from regarding the Sephardic history of Spain?

Mara Aranda: “It most probably comes from my extensive interest in History. I am interested in the coexistence of many different cultures including Iberians, Celts, Romans, Greeks, Carthaginians, Muslims and Visigoths during so many centuries in major towns along the Iberian coast. This makes our genetic population a true melting pot of cultures. It is a proven fact that they mixed. For example, regarding the Muslim elites when they conquered parts of Spanish Peninsula in the 8th century, it is recorded that there were leaders that married within the elite of the already established Goths to increase their power.

There have been various genetic studies amongst the population of the Peninsula and it has been determined that a good percentage of the population on the peninsula today has Muslim and Jewish blood. Time and again, it has been written that the Jews and Muslims were all expelled and that there was an extreme ethnic cleansing.  However, more recent studies show that genetically this was not the case. People changed their surname and imitated the customs of the rest of the population until their past was finally diluted. Some people make the effort to really discover their ancestral lineage, like in my case, but that is another story and will probably be a book one day…”

The city name Valencia has led to Jewish surnames including Valensi and Valenci in Spain, Valensin in France, and Valensy in Tunisia. Due to the ability to interchange “b” and “v” sounds in Spanish, there have also been records of Balensy and Balansi from Italy.

More information about Mara Aranda via this exclusive article: https://247valencia.com/valencia-music-a-new-album-by-mara-aranda/