You are here: Home  /  Sports  /  The spectacle of Sea Rowing triumphs in Benidorm
Sports 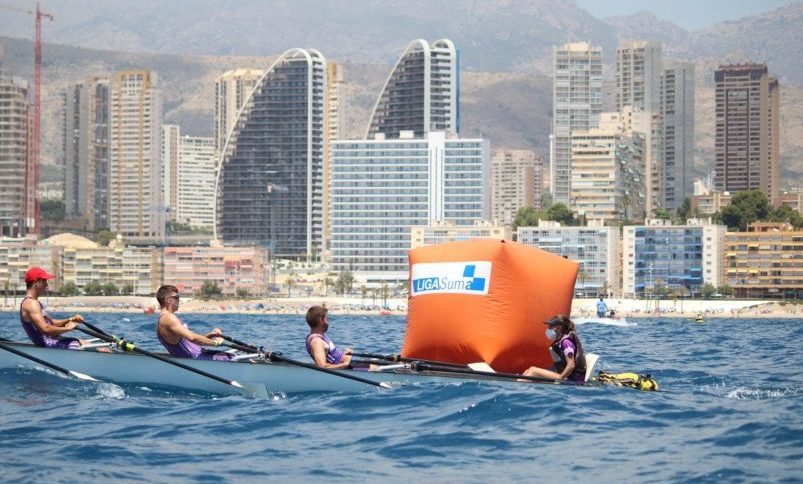 The spectacle of Sea Rowing triumphs in Benidorm

##The Levante Beach in Benidorm witnessed, last Sunday June 27th, the SUMA Autonomous Championship of Sea Rowing, which was organized by the Club Náutico Benidorm in collaboration with the Rowing Federation of the Valencian Community. The weather was good and a total of 171 athletes, belonging to twelve clubs of the autonomous coast, offered a good show via their boats. The regatta featured races in the cadet, youth, senior and veteran categories, and left the 2021 regional champions of Sea Rowing. Cadets and veterans completed a course of 3,000 metres and made four tacks, conditions that were hardened for youth and absolute, who travelled 4,000 metres and had to face six tacks. This modality is practiced in open water and in boats ranging in size from 6 to 10.70 metres.

The cadet category had the presence of 12 boats and their results were well-distributed. Club Deportivo de Mar Clot de L’Illot El Campello won the women’s C2X while Real Club Náutico Calpe won the C4X+. Regarding the men’s race, the victory in C2X was for the boat of Club Náutico Santa Pola. The Santa Pola team also won the C2X junior men’s race, in which three teams participated.

The absolute age was the most crowded, with the participation of 35 boats, and kept some of the protagonists in other tests, in terms of victories. Club Deportivo de Mar Clot de L’Illot El Campello repeated double success in the women’s races, with the first position in the C2X and C4X+ races; and also won the men’s C2X and mixed C2X races. In addition, Club Náutico Santa Pola returned to the top of the podium, in the men’s C1X; and Real Club Náutico Gandía won in the men’s C4X+.

The veteran category hosted five races and witnessed the departure of 27 teams. Club Remo Torrevieja took the victory in the women’s C1X and Club Náutico Altea did the same in the women’s C2X. In the men’s races, Club Deportivo de Mar Clot de L’Illot El Campello culminated its successful day of rowing with the first place in the C1X race and Real Club Náutico Valencia won in the C2X. The veterans also had a mixed C2X race, whose triumph was for the Real Club Regatas Alicante team.