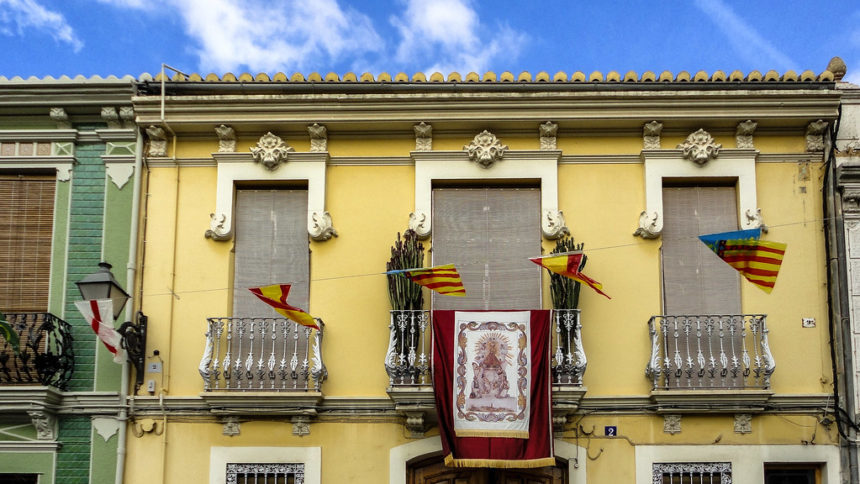 #Valencia is a city bereft of back gardens. A fact which is bemoaned by every single expat who misses a place where you can stretch out under the sunshine, kick a ball around and barbecue Asda-lemon-and-coriander chicken breasts. What you get instead is one of the city’s 300,000 balconies. But the Valencian balcony is more than just a place to keep your potted plants and stack your plastic chairs. It’s a vehicle of expression, a way of showing the world who you are and what you believe.

In some parts of the UK, people have a front room they never really use, with plush furniture and deep carpets all on show to passers-by through pristine windows. Here, the Valencians are incorrigible show-offs and the balcony is their window to the world and, more importantly, to their neighbours.

Valencians have used their balconies to express who they are and where they stand since the Middle Ages. The custom of decorating balconies to welcome visiting royalty and popes or to celebrate the procession of a relic of a saint or image of the Virgin is still kept up today. It’s a tradition which is particularly popular in the old palaces on C/ Caballeros and C/ Avellanas and goes right back to medieval times. People filled their balconies with flowers and all the best furniture from inside the house. The finest bed spreads were spread over the balcony rails, all competing with the neighbours in an ostentatious statement to the rest of the city how pious and, of course, how well-off you were.

Today, this neighbourly competition is particularly important at Christmas when everything depends on the size of the plastic Santa Claus climbing up your balcony or how fast your lights flash. Medieval chronicles describe the amazing decorations of the balconies of noble families with burning torches and candles. The same chronicles also describe how, more often than not, it all ended in disaster with houses going up in flames and in one case a whole neighbourhood. Tradition today dictates that the fire brigade bring up the rear in the spring procession of Virgen de los Desamparados; this has its origins in the practical fact that they were needed to put out the fires caused by the balcony decorations.

On holidays, saints’ days and match days… people around here like to fly the flag. But which flag? In fractious Spain, people are aware that the flag you choose to drape over your balcony says a lot about who you are. Make sure you make the right choice when decorating your balcony, because you can send out any number of messages by displaying one of the variations of the Spanish flag. There’s the flag with the old Francoist eagle displayed by dodgy old men with thick-rimmed spectacles, dyed black moustaches and medals, the present Constitutional flag with or without the coat of arms (no political difference, it’s just cheaper without), the Spanish flag emblazoned with the black ‘Osborne’ bull for those citizens obsessed with bodybuilding, Nazi memorabilia and immigration issues, and even the old Republican tricolour for ageing hippies and romantic Erasmus students who’ve read too much Hemingway and Orwell.

It doesn’t stop there. The variations on the regional Valencian flag are no less confusing. You have the official red and yellow stripes with blue strip which is the flag favoured by Blaveros ‘blue noses’ (those who feel Valencia is constantly on the verge of being invaded by Catalonia), the red and yellow stripes without blue strip for those who wish Catalonia had already invaded, and the flag with red and yellow stripes, a blue triangle and one star for those who want to create an independent Valencian state. You only really see this flag on the balconies of squats and displaying it is the quickest way to get the police to call around, usually with a big van to take you away, along with your dreadlocked friends, your marijuana plant (another creative way some Valencians make use of the balcony) and your pet rat.

A flag can be a subtle (or not so subtle) way of making a statement but most Valencians prefer to get straight to the point and put things in black and white. The true purpose of the balcony in Valencia, of course, is to hang up a big sign telling the world what’s on your mind. They range from the merely commercial “Se Vende” or “Se Alquile” to personal attacks on neighbours (“Will those pigs in number five stop throwing rubbish in the street!”, seen on C/Ramiro de Maeztu), but usually the balcony sign is away of airing some political or social grievance. In general, Valencians seem to be under the bizarre illusion that putting some black paint on an old white sheet they will somehow mobilize the populace and turn their little complaint into a human rights issue of earth-shattering importance.

A study of these signs, which are always in the local Valencian language these days (sloganeering sounds so much better in Valenciano), is like a potted history of Valencian civic unrest. In the thirties, it was “No Pasarán” as republican Valencia defended itself against Franco’s advances. As the city was brought into line under the regime in the 1940s and 1950s, it was “Victoria “, “Arriba España” and “Viva Franco”. By the 1970s, people’s balconies got a bit more radical with slogans like “El Saler Per Al Poble” (a campaign to stop speculation and over-construction in the Albufera nature reserve) and “Llibertat, Amnistía, Estatut D’Autonomia” calling for freedom, amnesty for political prisoners and regional autonomy. Great causes, indeed, but having achieved all these things and with democracy we’ll and truly reinstated, it’s now every homeowner for himself and the concerns displayed on people’s balconies are, to say the least, more prosaic in comparison. These days, it’s “Estem Farts” (before you ask, that’s nothing to do with breaking wind) and “Volem Dormir” on the balconies of those who want the local nightspot closed down or “Volem Una Plaça” for those who want a park or square built in front of their house, or anything else that will increase the price of their properties.

Of course, the fact that few of these banners will be obeyed is irrelevant; it’s expressing yourself and letting your neighbors know what you think that really counts. That and showing off the size of your bed-linen. Oh, and if you want to see some classic Valencian balconies, check out the wrought iron Modernist beauties on C/ de la Paz and around the Mercado de Colón. 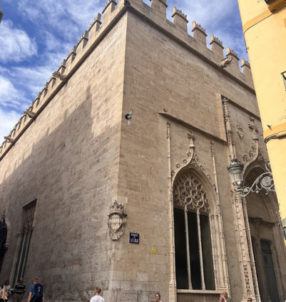