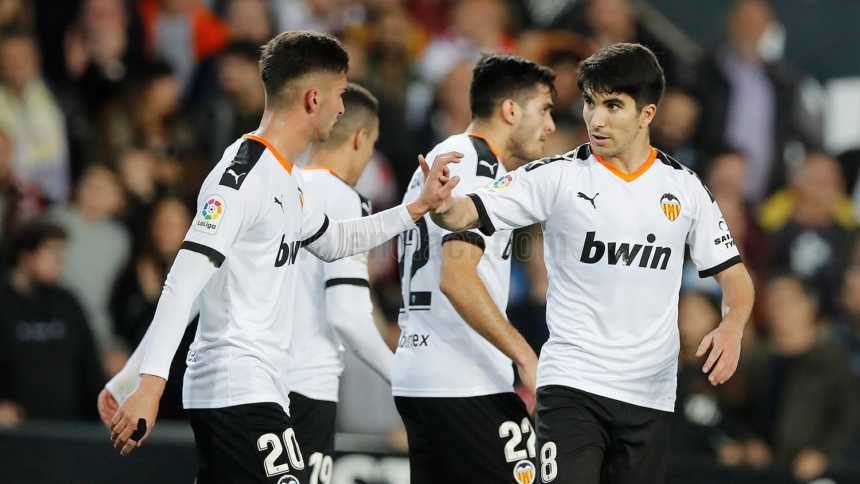 As the local sports journalist Kike Mateu is one of the first cases to confirm positive for the Coronavirus in Valencia, the premier football club in this city are themselves struggling to ward off a losing bug that has seen them fall to defeats in the last four away matches.

Mateu who is regularly seen presenting the sports programme “El Chiringuito” on television and writes for the newspaper ‘Las Provincias’, undoubtedly contacted the disease on Valencia’s ill-fated trip to Italy, when they faced Atalanta in the Champions League.

Playing the match in Milan, as the ground in Bergamo was considered not up to Champions League standards by UEFA, Los Che suffered an embarrassing defeat that leaves them with a mammoth task at the Mestalla if they are to reach the next stage of the competition.

With Garay out with an injury for the rest of the season and Paulista suspended after his sending off in Amsterdam, the Valencia manager Albert Celades had to rely on the makeshift centre back partnership of Diakhaby and Mangala… to try and thwart the attacking prowess of the Italians.

Playing together for the very first time in such an important encounter was asking a lot of the French duo, and their lack of match practice together was exposed to full effect by I Nerazzurri. As early as the 16th minute Atalanta took the lead when Dutch international Hans Hateboer reacted quickly, by getting in front of Gaya, to poke the ball home from close range.

A surge of attacks from the players in blue and black resulted in a second goal just before the interval when Josip Iličić shrugged off a challenge from Soler, to shoot past Doménech, with a right foot shot from just inside the area.

Two goals down at the interval was a bit harsh on Valencia, in all honesty. They themselves had two glorious chances to score, the first when Ferran hit a post and the second when Guedes sprayed a cross-shot across the face of the Atalanta goal that just evaded the outstretched studs of the lunging Mangala.

Unfortunately, the second half highlighted Valencia’s defensive deficiencies even further. First, Kongdobia lost a tussle with Remo Freuler close to his own penalty area. From that struggle, the Swiss midfielder took a few paces before unleashing a curling shot inside Doménech’s left hand post.

Five minutes later, Atalanta added a fourth when the left hand side of the Valencia defence was absolutely shredded. An intelligent run by Hans Hateboer put him clear through on goal, and he finished with aplomb, placing his shot from a tight angle past the advancing keeper.

Valencia did claim a consolation goal from substitute Cheryshev, and also missed another couple of glorious chances to reduce the deficit during the second half period.

Quite frankly, it could have been 4-4 and the Italian clubs frailities at the back give a glimmer of hope for Valencia clawing back this contest. It is not in Atlanta’s nature to defend so expect a goal fest in the second leg and an early goal at a full Mestalla will test their metal to the full. A repeat of the comeback night against FC Basel in 2014 is not completely out of the reckoning, and would surely rank among one of the greatest comebacks in the club’s history should they be able to accomplish it.

As bad as Valencia’s away form has been with heavy defeats in Madrid (Getafe) and San Sebastian (Real Sociedad), their home form keeps the fans reasonably optimistic of greater things to come.

Los Che followed their exciting victory over Barcelona on home soil with another three points against Celta Vigo. It took a solitary goal from Carlos Soler well into the second half to secure the win against the team from Asturias that included former Valencia favourites Jeison Murillo and Santi Mina in their squad.

The following home match was a mouthwatering clash with Atletico Madrid. The encounter with the Rojiblancos was a great advert for La Liga and a share of the spoils for both teams was a fair result.

Twice the team from the capital took the lead through Marcos Llorente and Thomas Parley respectively, but twice they were pegged back by goals from Paulista and Kondogbia. The passion, endeavor and effort shown by the players was evident throughout the full ninety minutes and if the team can recapture this kind of form on their travels, they will win more games than they lose.

Betis came next to the Mestalla. Having won only once in the last 26 visits, the odds on a Valencia victory were very high with the bookmakers.

Betis are full of creative players. Joaquin, Canales and Guardado are testament to this from their time at the Mestalla but they lack real quality directly in front of goal. The imprecisions of both sides was evident in the first half, as few chances were created and the teams went into the changing rooms at the interval in a goalless stalemate.

Betis came out of the traps for the second half more potently than the home side and should have taken the lead when Fekir stroked his left foot shot against the bar, from close range, when it was easier to score.

The deadlock was broken on the hour mark when Gameiro produced a carbon copy strike to that Freuler had produced for Atalanta against Los Che the week before.

Relief and ecstasy took over the stadium during the momentary celebration after the goal, but still the undercurrent of frustration and trepidation could be felt as the game headed towards its climax and Betis threatened Cillessen’s goal with more frequency.

Finally, the nerves were calmed when Parejo added a second with a minute on the clock remaining. Being Valencia, there was even more late drama when Betis substitute Lorenzo Móron reduced the arrears in stoppage time.

Valencia clung on in the last seconds to secure the three points. There was a statement by the club that there would be no post-match conference from them as a precaution against the Corona virus.

The Betis manager Rubi did however come out to face the press, probably conscious of the fact that his job was on the line, and a justification for his team’s seven match winless streak was required.

Meanwhile, Levante UD fans celebrated what was the highlight of their season to date recently, a single goal victory over Real Madrid at the Ciutat de Valencia.

A stunning left foot connection from the ever reliable Morales flew past Tibo Courtois late in the game, to leave the league leaders to rue a plethora of missed opportunities early in the contest.

A victory against Leganés at home earlier in the month also helped relegation fears; although Levante’s away form is compatible to that of Valencia, so they too need to find a solution on how to pick up points on the road.

Anyone wishing to get tickets for Valencia or Levante games can do so by visiting the box offices at the grounds or through the official websites.