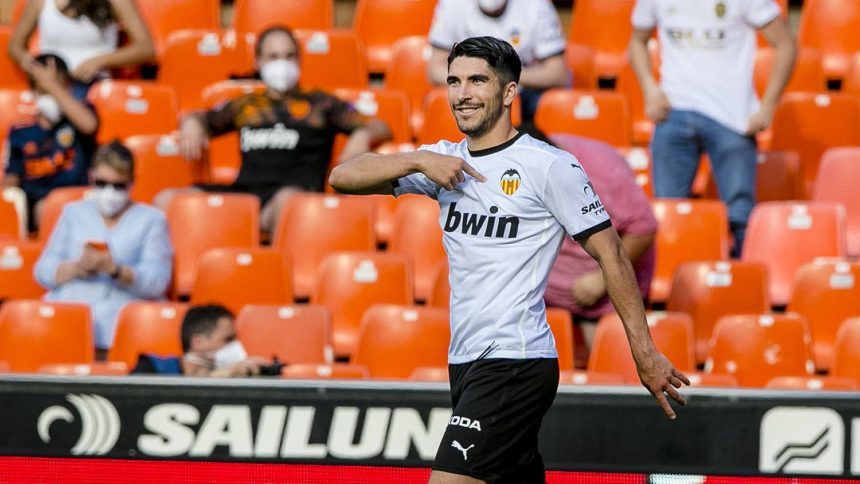 ##Valencia return to training at Paterna on the 7th of July, but there are unlikely to be any new signings before then as the Euros pan out and teams await their fixture list for next season´s campaign.

Key players for the club like Gayà and Wass will get an extension to the return deadline, as their respective countries continue to progress in the Euros, but Gonçalo Guedes will be expected back on time as he played no part whatsoever in Portugal’s contribution to the tournament… despite being included in the squad.

The former PSG star has already hinted that he wants to leave the Mestalla, with both Villarreal and Fiorentina being touted as potential suitors. This could be the first real test for Bordalás, in trying to persuade the crowd favourite that his future remains in Valencia.

One person who will be definitely absent from the pre-season training camp will be Carlos Soler, who found out recently that he will be part of the Spanish squad heading to the Olympic Games in Tokyo.

He will instead train with the Spanish Olympic squad in Benidorm before they head to Japan to take on Egypt, Australia and Argentina in the group stages of the competition. He will arrive back at the Ciudad Deportiva in early August, hopefully with a medal of sorts, injury-free and his fitness complete.

The club have already arranged several friendlies prior to the league start, with matches against Villarreal, Atromitos F.C. from Greece, FC Cartagena, Real Zaragoza and Levante UD already confirmed.

There was also a lot of talk of a friendly against Getafe as compensation for the Bordalás switch, but as yet nothing has been confirmed on that front.

Bordalás was not the only new management face at Valencia this summer. After getting relegated last year to la Tercera, Oscar Fernández was replaced as the Valencia Mestalla coach by Miguel Ángel Angulo.

The former Valencia legend has had an association with the club in various guises for over 25 years, coming through the youth system initially, and then winning eight trophies with the first team during his twelve seasons as a first team player.

The importance of VCF Mestalla must not be underestimated, and last season they provided past players like Kang-In Lee, Soler and Hugo Guillamón to the first team line up.

Indeed, former favourite Ferran Torres, became the fifth VCF Academy product of all time to score in either the Euros or World Cup when he netted against Slovakia recently. Mendieta, David Silva, Jordi Alba and Isco were his predecessors.

VCF Mestalla newcomers include 19 year old Alberto Marí, who came up through the Hercules youth system and spent the last three seasons at Eibar, and Georgian Under 21 international Giorgi Mamardashvili who arrives from Dinamo Tbilisi on a season long loan with an option to buy.

Arguably the best piece of work Valencia have done in the summer so far is securing a contract extension of Xavi Estacio. The defender from Manises started out as a “Benjamin” (Under 10) with the club and has continued along the Valencia pathway with lots of positive feedback. Next season could easily see him make his first team debut, if Bordalás continues promoting youth from within in the same way his recent predecessors have.

VCF Feminino will also be looking to improve on a mediocre season last year, which saw them finish ninth in the league. Contract extensions for Marta Carro and Noelia Gil will help the cause, and if Sandra Hernández can find the form that earned her international caps in 2018, then a top three finish is not out of the question. Two names to look out for in the future are Ainoha Alguacil, who made her debut at 15 against Levante recently and Irene Guillem, another teenager who was called up to the squad for the “Teika Derby”.

Off the pitch Valencia have entered into interesting initiatives with Chiliz and Feder. Chiliz, the creators of fan tokens and https://www.socios.com/ will have a specialised Valencia fan token on the first team shirt for the season. The hope is that the fan engagement will help supporters and teams get closer together, something that the current Valencia ownership, desperately needs.

Feder (the Spanish Federation for Rare Diseases) have also joined forces with Valencia in a first of its kind project. The club will allow use of their social media to highlight various rare diseases and give further exposure and visibility to these conditions. An estimated 300,000 Valencians suffer such ailments. The hope is that their lives, and those of many others in other regions of Spain, will be helped in some way by highlighting their situations.

Another piece of news, this time from afar regarding former Valencia favourite Salif Keïta Traoré. He was the African player of the year in 1970. The Mali-born international, who played for Valencia in the early seventies, has been honoured with a statue at his first club AS Real Bamako. He created the first ever professional training centre in his country in 1994 and two years later was awarded the Order of Merit, the highest honour given out by Fifa.

Over at Levante UD, the big news of the summer is the signing of Roberto Soldado from Granada. The Valencia-born native has had mixed fortunes since leaving the city for Tottenham in 2013…but can always be relied to score key goals at important times throughout the year.

Linking up with Morales, Campana and Bardhi will breed attractive football at the Ciutat de València, and they could well be going toe-to-toe with their more industrious rivals once again for the right to be called the city’s highest ranked team in La Liga.

Villarreal CF continue to look the strongest outfit in La Comunidad heading into the new season. Their fans are patiently waiting to see who will be the opposition in the Champions League. If their talisman in defence Pau Torres is still a “Yellow Submarine” player come mid-August and they can add one or two more key personnel, then they could go very far in the Champions League… as well as be serious challengers for their first ever La Liga title.