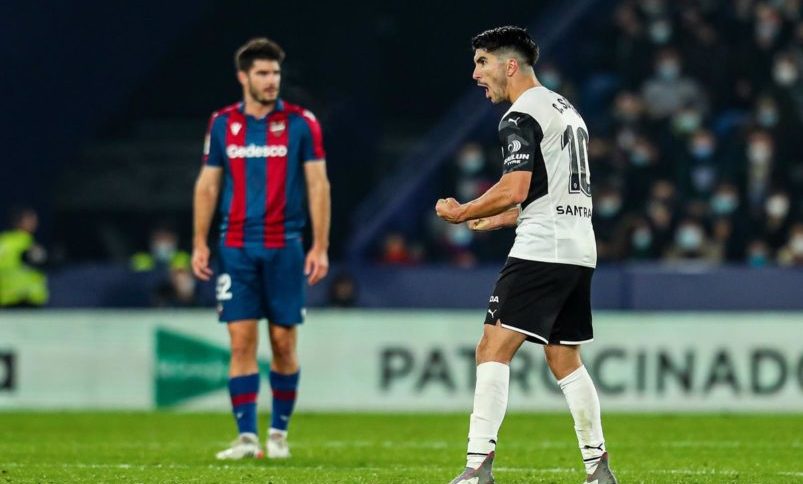 #December was looking like being one of the most successful months of 2021, on and off the field for Valencia CF, until their home defeat to Espanyol on the final day of the year.

The month had started well with a La Liga contest in the North West of Spain with Celta Vigo. The Galician side are always difficult to beat at the Abanca-Balaídos, and in Iago Aspas they have a striker in their side that opposition fans would love to have leading their own front line.

The Mago de Moaña (Magician of Moaña) is streetwise and savvy.  His reaction when putting Celta in front in the contest gives a good insight into his thinking processes when on a football pitch.

After scoring in the tenth minute against Los Che, he immediately realised he had been badly injured when poking the ball past Cillessen.

Aware he was only one booking away from a one match suspension, he took off his shirt to celebrate the goal. This action leads to an automatic yellow card, thus allowing Aspas to serve his punishment, whilst recovering and not being match fit.

The La Liga Disciplinary Committee considered opening an investigation into the situation to add further sanctions, but decided finally against it, leaving Aspas to miss Vigo’s next match with Mallorca.

With the departure of Aspas early in the game, the home side lacked bite and penetration up front. The visitors pressure was then rewarded when Hugo Duro capitalised on a mistake by the Vigo goalkeeper, to put the teams back on level terms.

Valencia scored the winner ten minutes into the second half. Gayà won the ball well inside Vigo’s half. His telling cross along the ground found Maxi Gómez and his positive first touch took him away from the Celta defender.

In on goal, with only the keeper to beat, he made no mistake and slotted the ball to the left of Matías Dituro. The subdued celebration by the number nine was well received by the home fans, who no doubt remembered him scoring similar goals for Celta a few seasons ago.

Two Comunidad  Valenciana derbies followed the Celta victory. The first was the home encounter with Elche. The club from the South of the provence battled well and very nearly left the Mestalla with a point.

With the game level at one apiece Valencia’s winner came three minutes from time from the unlikeliest of sources, Cristiano Piccini.

The Italian defender, only on the pitch due to an early injury to Toni Lato, latched onto a loose ball in the Elche penalty area to hit a wonder strike past Édgar Badía.

Earlier, the in-form Gonçalo Guedes had given the hosts the lead, only for Lucas Boyé to equalize with around 15 minutes of normal time remaining.

Valencia’s next opponents were their city rivals Levante UD. The Estadi Ciutat de València was well-packed with supporters of both denominations, and every one of those fans will have been pleased they purchased a ticket to witness a humdinger of a match.

Levante strolled into a 2-0 lead courtesy of Campaña and Roger Marti, only for Valencia to reduce the arrears through Guedes on the stroke of half time.

Early in the second half, Soler converted a penalty and then the local born midfielder put the visitors in front for the first time. Guedes added a fourth with five minutes remaining, which led to a stream of Levante fans leaving the ground before the end in frustration.

Substitute Enis Bardhi then scored a great team goal in injury time for Levante, but the home side could not find the required additional goal to give them something out of the pulsating derby.

The feisty encounter continued to play out after the final whistle, leading to the referee, Pablo González Fuertes dishing out red cards to Roberto Soldado and Uroš Račić, the result of a post-match fracas as both teams left the field of play.

Three successive victories gave Valencia the opportunity to finish the year in fourth place of La Liga. The contest against Espanyol would allow the team to leapfrog Barcelona, Real Sociedad, Atlético Madrid and Rayo Vallecano in the table with a win.

The hosts went ahead, just after the restart, thanks to a powerful Alderete header. As the final whistle closed in, Valencia got increasingly nervy and continued to defend deeper and deeper. Their negativity cost them dear. Firstly, Raul de Tómas equalized and then Javi Puado scored for the winning goal visitors from Barcelona.

The defeat could be very costly at the end of the season, as Valencia fans cling to the notion of European football. They do, however, continue to make strides in the Copa Del Rey, having disposed of the threats of Utrillas and Arenteiro.

Next up is FC Cartegena. Valencia know this will not be a game that they can take lightly, having just edged a pre -season friendly against the Murcia based outfit in July of last year.

Levante UD, meanwhile, can totally focus on the league, having been knocked out by Alcoyano on penalties in the last round. The game had ended level at 3-3 after 120 minutes in Alcoy, before the home side got their name in the next round by overcoming the visitors three goals to one in the shoot-out.

Still winless after 18 matches in La Liga, their first fixture of 2022 is just an hour or so away in Villarreal. Home matches with Mallorca and Cadiz in January look like must win games if the team are going to close the gap on their relegation rivals.

With the transfer window open now, it is likely that at least some loan signings will be heading to Levante, and that transfer activity both in and out of the club will be prominent. Valencia have Daniel Wass, Jason and Denis Cheryshev now amongst their free agents, so they too could see a buzz of activity during the transfer window at the Mestalla. Valencia also have a tough start to the New Year with Real Madrid, Sevilla and Atlético Madrid their next three opponents. Consequently, January will be a pivotal month in shaping this season’s destiny for both Los Che and Los Granotas. 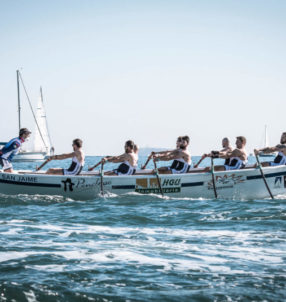