You are here: Home  /  Sports  /  VALENCIA FOOTBALL… “AWAY FORM” A MAJOR CONCERN
Sports 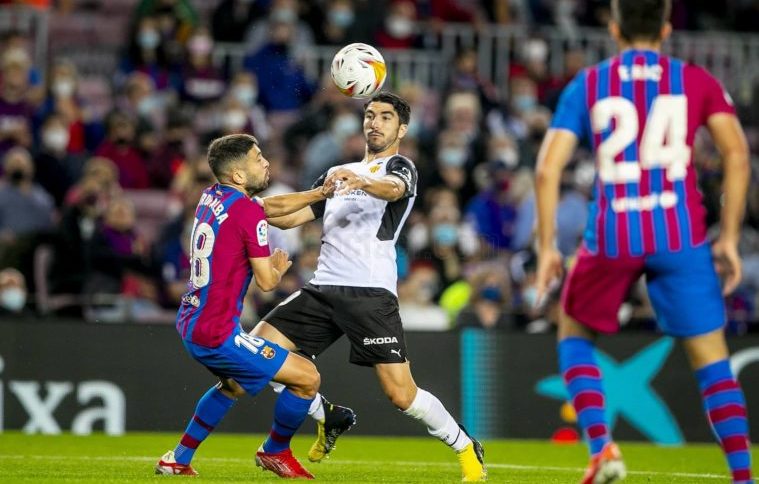 #Valencia CF continue to take one step forward and two steps backwards as La Liga enters the start of the winter programme.

The major factor in the lack of progress from ‘Los Che’ is their inconsistent form away from the Mestalla, the last four matches on opponent’s soil have yielded just one solitary point.

It is not just the lack of points that is a growing concern, but the method of defeat in the last two games in particular has been hard to swallow for the Valencia faithful.

The Nou Camp is always a tough venue to visit, but Barcelona have a few problems of their own right now. If anything, there could not have been a better time for Valencia to pitch up in Catalonia. Struggling to overcome the loss of Messi, financial shortcomings, and to adhere to the Koeman coaching methods…fc Barcelona are in turmoil both on and off the pitch. Unfortunately, Valencia could not take advantage of this dilemma and went down to a 3-1 defeat.

Things started brightly enough when Gaya scored in the first few minutes of the game with a tremendous 30 yard shot that gave Ter Stegen no chance.

Barcelona’s equaliser was equally sublime with the talented Ansu Fati, cutting inside and playing a cute one-two with Memphis Depay before curling a shot just inside the post that evaded the despairing dive of Cillessen. The turning point of the game came five minutes before the interval when Barça got a penalty. Gayà was adjudged to have impeded Fati, when the teenager from Guinea-Bisáu was through on goal. Memphis took the penalty and made no mistake with his spot kick.

Just after the interval Valencia reacted strongly to going behind, with Soler hitting the inside of the post and Guedes hitting an effort that Ter Stegen saved at the second attempt. However, Valencia tired as the game progressed and Coutinho ended any doubt as to the direction of the three points… when he tapped home unmarked in the middle of the six-yard box with just minutes left on the clock.

The next away game took Valencia to Andalusia for the fourth time this season. Once again, this autonomous community proved to be an unhappy stomping ground for Valencia.

This was a wretched performance by the visitors and the game as a contest was effectively over inside thirty minutes. By that time, Borja Iglesias had bagged a brace for Real Betis and more goals looked imminent. Gabriel Paulista pulled a goal back against the run of play before the first half had finished but the second half saw the green and white team from Seville step up another gear. Goals from Pezzella and Juanmi Jiménez were no more than Betis deserved. By the close of the game, shouts of “¡Olé!” were ringing out from the home fans as the Betis socios gloated at their team’s superior performance. The 6-3 victory Valencia achieved at the Estadio Benito Villamarin, just four years ago, seemed light years away after this match.

Sandwiched in between the Betis debacle were home matches with Real Mallorca and Villarreal.

The match against the islanders was the first time this season the stadium was allowed to host at full capacity by the local council. The Mestalla was nowhere near full but the noise level was louder than the other home games to date. The match was a game of two halves. The visitors were two goals to the good by half time and Kang In Lee’s return to the ground where he learnt his trade was going to plan despite the recurrent boos from home fans, disappointed at the way his departure from the club came about.

The pivotal moment of the game came when the South Korean was shown a straight red for a high tackle on Daniel Wass. From that point Mallorca defended stoutly, but capitulated in the ten additional minutes of injury time as Guedes and Gaya scored in the 93rd and 98th minute respectively.

To add insult to injury Rodrigo Battaglia was also sent off at the end for the visitors, after receiving two yellow cards, when only entering the game with only 15 minutes of normal time remaining.

Valencia’s best performance in recent games was undoubtedly against their ‘Comunidade Valenciana’rivals Villarreal. Parejo got the ovation from the Valencia fans that Kang-In would have liked but was less effective than his former team mate had been against his old club and was substituted at the half way mark.

By that time Parejo’s new club were a goal behind, courtesy of an unusual source. A marauding run by Hugo Guillamón on the right flank saw him advance into the penalty area and daintily chip the advancing Rulli, with the kind of finish that any top striker would be proud of.

It took a further goal from Carlos Soler to distinguish the fire of Villarreal and that came in the form of a penalty. Alberto Moreno clashed with Foulquier, just inside the area, and the former Liverpool defender was penalised for a clumsy high challenge when there seemed to be no imminent danger.

The victory added increased pressure on the Yellow Submarine coach Unai Emery. Despite being well-placed in the Champion’s league group stages (second behind Manchester United) they are in the bottom half of La Liga and not playing like the team that finished seventh last season.

Another team failing to reproduce the form of last season are Levante UD. Early in October they dispensed with the services of the coach Paco López, much to the disappointment of many fans. Soon after, the Badajoz born Javi Pereira was named as the successor. Previous appointments have included being assistant coach at Watford, Maccabi Tel Aviv and Fulham. Most recently, he was employed as part of the Chongqing Liangjiang Athletic F.C. set up in China.

Back in 2011, he was also assistant coach at Levante for two years whilst Juan Ignacio Martínez (JIM) was in charge. Since his appointment the club have drawn with Getafe and Atlético Madrid at home but lost to Sevilla away, and most recently been beaten at home heavily by a very underrated Granada side.

Deep in the relegation places, Levante are in danger of falling off the pace of their rivals and some good December results will be necessary if the club do not want an uphill battle to stay in La Liga in 2022.