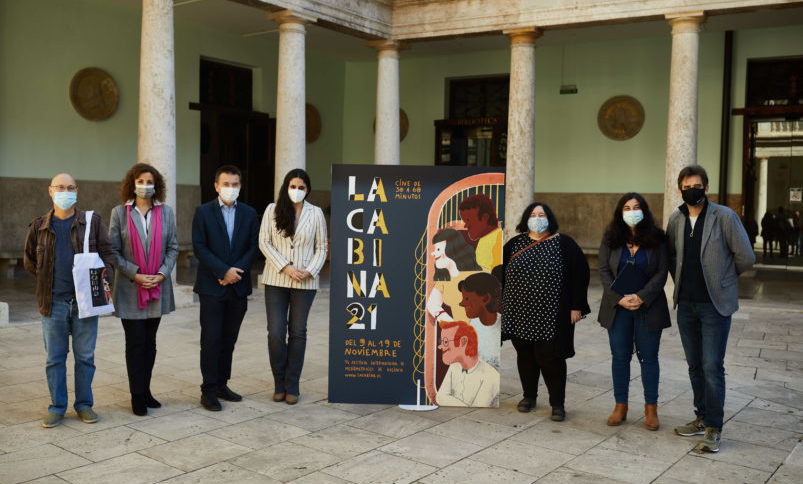 #The press conference of the 14th edition of La Cabina – International Medium-length Film Festival of Valencia, scheduled from 9 to 19 November and organised by the University of Valencia, through the Aula de Cinema, was held today. The presentation to the media, held in the Aula Magna of the Centre Cultural La Nau, was attended by the Vice-Rector for Culture and Sport of the University of Valencia, Ester Alba; the Deputy Director of Audiovisuals and Cinematography of the Institut Valencià de Cultura, José Luis Moreno; the Councillor for Cultural Action of the City Council of Valencia, Maite Ibáñez; the director of the festival, Sara Mansanet; and the artist who created the trophy of La Cabina 2021, Nuria Riaza.

The festival will screen a total of 24 medium-length films in competition from 13 different nationalities, between the Official Section (fiction films that will be screened at La Filmoteca) and Amalgama (non-fiction films and other languages that, once again this year, will be screened at the La Nau Cultural Centre). La Cabina has 15 international premieres in its competition sections.

The Filmoteca will also host the Inèdits section, medium-length films from other periods that have not been commercially distributed and that the La Cabina festival rescues to show them to the public on the big screen. This year, Inèdits will screen medium-length films by Lucile Hadzihalilovic, Athina Rachel Tsangari, Pier Paolo Pasolini, Adina Pintilie and George A. Romero.

Among the new features announced are the alliance with València, World Design Capital 2022; the special screenings of three documentaries and the congress in tribute to Luis García Berlanga, which will take place at the La Nau Cultural Centre, as well as the screening of medium-length films from the Official Selection in two penitentiary centres as a commitment to the social work of the cultural event.

The festival will open its fourteenth edition on 9 November at the Teatre Talia with a hostess of honour, the comedian and presenter María Juan. Starting at 8 p.m., La Cabina will begin a long-awaited edition after last year’s restrictions due to COVID-19. The gala premiere of the medium-length film “Histoires D’entrejambes (Crotch Stories)”, by Myleine Guiard-Schmid, will open the screenings of the best international cinema from 30 to 60 minutes that, until 19 November, will be concentrated in Valencia.

In the presentation to the media, Ester Alba, Vice-Rector for Culture and Sport at the University of Valencia, highlighted the consolidation of the festival, promoted by the University, which gives space to medium-length films, “a format that does not easily find commercial distribution, as feature films or short films do”. She also stressed that the University is one of the festival’s venues. The La Nau Cultural Centre, as it does every year, will host one of the festival’s cycles, specifically the ‘Amalgama’ section, which will begin on 10 November. In addition, La Nau will host the three special screenings and the conference Mediterráneo, fiesta y carnaval. In tribute to Luis García Berlanga, to be held on 18 November. And another university cultural venue, the Jardí Botànic, will host the closing ceremony of La Cabina, on the 19th, at 8 pm.

José Luis Moreno, for his part, has highlighted the great task that the medium-length film festival La Cabina has been doing for 14 editions of “positioning Valencia as a benchmark in the exhibition and defence of this film format”.

La Mutant is once again the venue for Carne Cruda on Tour, Fashion Films and AulaCabina. Maite Ibáñez, whose department is responsible for the theatre, has defined the medium-length film festival as “a meeting point between different disciplines such as music (with the Visuals section), radio (with Carne Cruda on Tour), fashion (Fashion Films), audiovisual literacy (AulaCabina) and the plastic arts (through the trophy and posters); as well as being a space in which different types of audiences are integrated”.

The director of La Cabina, Sara Mansanet, unveiled the new features of the fourteenth edition of the festival, such as the increase in the number of penitentiary centres that the festival will visit to screen medium-length films, reinforcing its cultural and social commitment thanks to the collaboration of the Àmbit Association.

The documentary by journalist, director and screenwriter Javier Tolentino, “Un Blues para Teherán”, shortlisted for the Goya 2022 for Best Feature Documentary, is part of the special screenings of La Cabina 2021. Tolentino has a long and close relationship with the festival, having been a member of the jury in previous editions and having given a seminar on film journalism. “Las Sinsombrero 3. Las exiliadas”, by Manuel Jiménez, Tània Balló and Serrana Torres, will also be part of these special screenings that will take place at the Centre Cultural La Nau. This third episode of “Las Sinsombrero” deals with the life and work of some of the Spanish artists and intellectuals who, at the end of the Civil War, were forced to flee Spain for an exile that lasted much longer than expected, forcing them to start all over again, both personally and professionally. After the screening, there will be a round table discussion with Manuel Jiménez and Cristina García Pascual and moderated by Adela Cortijo, director of the Servei de Cultura of the Universitat de València. Finally, the documentary “Que sirva de ejemplo”, by Sofía Castañón, which brings together 10 people from different cultural spheres to reflect on what heteronorma is, has also been programmed. This screening will be followed by a round table discussion with Rubén Serrano and Sofía Castañón, moderated by the journalist Patricia Moreno.

Mansanet also announced the agreement that the festival has reached with València World Design Capital 2022, which will be responsible for awarding the prize to the winner of the Best Poster award decided by this year’s jury. Finally, the international congress in tribute to the centenary of the birth of the Valencian filmmaker Luis García Berlanga “Mediterráneo, fiesta y carnaval”, organised by the Berlanga Chair at CEU UCH and completed with the screening of Se vende un tranvía and the subsequent round table discussion “Dialogues on Berlanga and Cinema”, with Josefina Molina, Cecilia Bartolomé, Rosana Pastor and Áurea Ortiz.