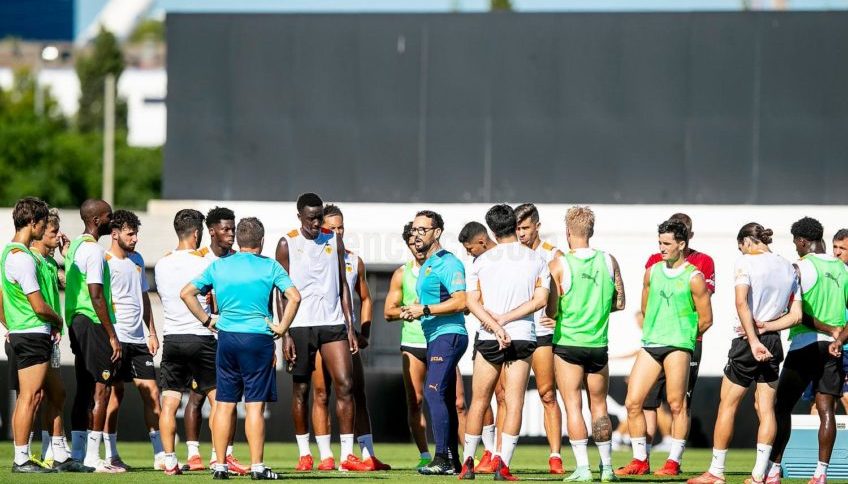 ##Valencia CF continues to progress in a positive direction on the field of play, and the majority of the supporters will be happy with the start Jose Bordalás and his team have made to the season.

Recent victories over Osasuna and Deportivo Alavés are evidence of this. These are the type of teams that Los Che have dropped points against frequently, in recent years. This year there seems to be no apparent weakness against such teams, as Valencia bagged three points from both games with relative ease.

The game against the Basques in the Mestalla resulted in a 3-0 victory for Valencia, and gave them their best start to a La Liga campaign in seven seasons.

Guedes had his best match in a long time for the club and capped off a great game with the final goal, latching on to a Maxi Gómez pass, after the Uruguayan centre forward had chested down a long ball and then touched the ball into his path.

Earlier, Daniel Wass had scored the team’s first league goal for the season in open play. Carlos Soler had flicked home from close range, on the stroke of half-time.

In Pamplona, the visitors were equally impressive and won by four goals to one… despite going a goal down inside the first ten minutes. That lead lasted less than twenty minutes for Osasuna, as Maxi Gómez met a fine cross from Carlos Soler at the near post, to level the scores going into the interval.

The second half belonged to Valencia, with Guedes once again showing an appetite for goals and a flair that was only seen in patches last season.

The second goal was all down to the Portuguese winger. Winning the ball with determination near the centre circle… he went on a mazy, attacking run. It resulted in the intended cross deflecting into the Osasuna goal, off the unfortunate Aridane Hernández.

Guedes then went one better with the third goal, emphatically finishing with a driving shot from just inside the area, despite being closed down by two defenders.

Alderete added a fourth with a powerful header from an outswinging corner from Carlos Soler, to seal a very satisfactory victory.

The next two games on the La Liga calendar pitched Valencia against Real Madrid at the Mestalla, and then away at Sevilla, at the Estadio Ramón Sánchez-Pijuán.

Unfortunately, the team failed to capture any points during these two key matches, highlighting that the squad is still a little way off the finished article in matching the top clubs in La Liga. However, the game at the Mestalla against Real Madrid was a classic, and the hosts can count themselves a little unlucky not to get at least a point, as they matched their opponents in every department, apart from the final result.

Valencia took a deserved lead have way through the second half when Hugo Duro scored his first goal for the club. Madrid responded with attack after attack and finally got their reward five minutes from time when Vinicius Junior’s shot took a huge deflection off Foulquier to leave Marmardashvili helplessly stranded.

Two minutes from time, Benzema won an aerial battle with the Valencia defence and keeper to take all three points back to the capital.

Three days later Valencia failed to show up in Andalusia and were soundly beaten by Sevilla. This was, undoubtedly, their worst performance of the season. Three goals down inside 22 minutes, the shell-shocked Valencia players looked towards damage limitation for the rest of the game. A second goal in as many games for Hugo Duro gave Los Che some consolation, but it was certainly a game to forget for the club’s supporters.

Valencia CF had the chance to get back to winning ways soon afterwards when Marcelino brought his Athletic Bilbao team to the city.

The former manager got a fantastic ovation from the home fans inside the ground and looked to be on the way to obtaining all three points when Iñigo Martínez gave the visitors the lead with around twenty minutes left on the clock.

The sending off of Maxi Gómez for a second yellow card made the task of recuperating a point even more difficult. However, Marcos André buried a chance in the fifth minute of injury time, to give the hosts a share of the points.

The following weekend Valencia were, once again, back in the South of the country… this time for a contest with Cadiz.

Valencia had not won any of their matches from their last nine visits to Andalusian based teams coming into the match at Estadio Nuevo Mirandilla.

That winless streak would stretch to ten, as Valencia failed to score in the league for the first time this season. The good news was that Cadiz also failed to score. So, the visitors did travel home with a point to their name.

Meanwhile, at Levante UD it seems that the Granota fans are in for a long season and will be subject to a battle to stay in La Liga this time around.

Recent losses to Real Sociedad, Celta Vigo, Barcelona and Real Mallorca have seen the team slide down the table and left them hovering around the relegation places.

Their next home game against bottom of the table Getafe could be pivotal at the end of the season. Therefore, the Levante fans will be looking for nothing other than a victory when the team from the South of Madrid come to the Estadio Ciudad de Valencia later this month.