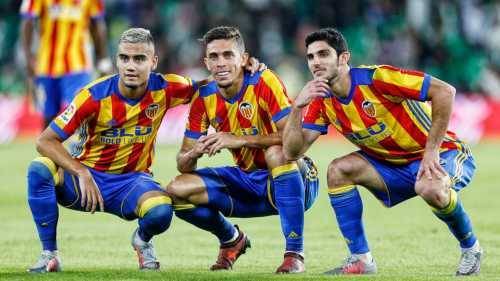 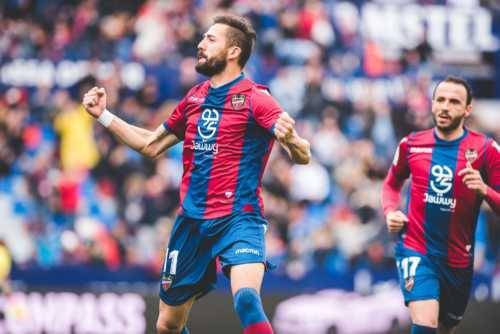 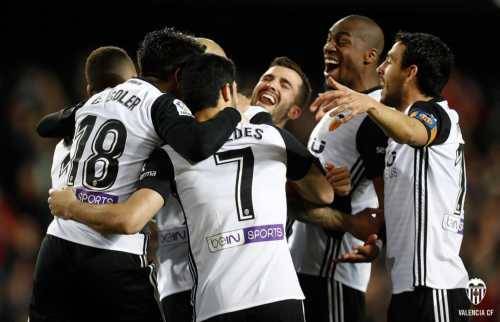 Despite a poor end to January and an irritating single goal defeat to Atlético Madrid in the first weekend of February, Valencia remain well and truly in the hunt for European football next season. With a 13 point lead over sixth placed Villarreal, the Europa League is virtually assured. What all Valencia fans really want is the Champions League spot that a fourth placed finish or above would bring.

The loss at the Wanda Metropolitano was the club’s third in the league on the trot, and it coincided with home and away defeats in between to Barcelona in the Copa Del Rey, to make a total of five games without success.

Worried fans could be forgiven for becoming pessimistic but a local derby with Levante UD was next on the agenda with more than points at stake. Bragging rights on the day eventually went to Los Che but the team from the North East of the city can count themselves unlucky to go away from the Mestalla with nothing.

Santi Mina put the hosts into the lead with a powerful header from six yards out when he reacted first to an inswinging Dani Parejo corner. Los Che fans were celebrating their lead for less than a minute as Levante went straight down the field and scored with a superb volley by Sergio Postigo. A Rodrigo Moreno header that grazed the bar nearly restored Valencia’s lead but the sides went into the interval deservedly level.

However, the main talking point of the game came when Coke had a perfectly good goal ruled out for Levante by the Catalan referee David Medie Jimenez. The ‘arbitro’ felt that a Valencia defender had been fouled as the corner came across but replays clearly showed that no infringement had taken place involving a Levante player.
That lucky escape seemed to stun the home side into action and, midway through the second half, Valencia gained the lead. A surging run by Carlos Soler ended in the midfielder getting a strong shot on goal that the Levante keeper could only parry onto the feet of the oncoming Santi Mina. As the in-form striker went to tap in the rebound he slipped, allowing Oier to partly intercept his shot. With the ball squirming around just a couple of yards from the visitors’ goal, Luciano Vietto won the race to the ball and netted one of the easiest goals he will ever score.

Levante threw caution to the wind in search of an equaliser but, with a minute left of normal time, Valencia were awarded a soft penalty. Zaza and Rober Pier tangled inside the area and, to the crowd’s surprise, the referee pointed to the spot to give the home side a glorious chance of securing the points. Parejo made no mistake with the spot kick to give his side victory in a compelling encounter.

Earlier in the season, after the reverse fixture with Levante at the Ciutat de Valencia, Valencia CF went on a record breaking eight game winning streak. These matches were all against teams that now sit in mid-table or the lower half of the league… with the exception of Sevilla. The first of these teams in this sequence was Malaga who are having a wretched season and are firmly rooted at the bottom of the table.

A sparse crowd at La Rosaleda had their hopes of seeing their team register only their fourth league win of the season raised when centre forward Brown Ideye put his side into a first half lead, with a touch from a corner that he knew very little about.

In the second half, Valencia raised the tempo and the introduction of Zaza and Rodrigo for Vietto and Mina gave Los Che a more physical threat upfront. Frustration continued to grow in the visitor’s camp as precious time elapsed, but then ten minutes from time the visitors got their just rewards when Francis Coquelin made an unmarked run to the front post to intercept a Parejo corner and glance it past the Malaga keeper.

More drama ensured as the Malaga player Ignacio was shown a straight red card for bringing Rodrigo down in the penalty area when looking certain to score with five minutes remaining. Parejo remained cool and slotted home his second penalty in consecutive weeks to give the visitors three points, which ten minutes earlier looked like being none.

The Basque side from San Sebastian, Real Sociedad, were the next team to visit the Mestalla and once again Valencia managed to claw out a victory despite not firing on all cylinders. Santi Mina has been a revelation this season and a brace either side of Oyarzabal’s equaliser gave the hosts the three points.

The following week it was Valencia’s turn to visit the Basque region, this time it was a trip to Bilbao to play in the stadium at San Mamés. This new ground still manages to create the passion of the previous venue of the same name that was demolished in 2013 and the fervent and proud Basque fans ensure no easy points are on offer to the opposition. Incidentally, Mestalla is the oldest stadium in La Primera Liga since the old San Mamés stadium was torn down.

A highly entertaining game saw the visitors take the league when a curling shot from Geoffrey Kongdobia evaded the despairing dive of the Bilbao keeper and just found its way inside of the post to send the visiting supporters wild with joy.

The hosts should have been level soon afterwards when a clumsy challenge inside the box gave the referee no option but to give a penalty. Former Valencia favourite Artiz Aduriz stepped up to take the kick but Neto guessed correctly, by diving to his right and managed to parry the effort away to safety.

Valencia were soon pegged back to level terms at the start of the second half when Athletic’s Oscar de Marcos equalised from almost the identical spot on the pitch that Kongdobia had scored from earlier. Both sides went for the winner and several good chances went begging in the respective penalty areas. Bilbao finished the stronger and the visitors will definitely be content with the point they took from such a tough stomping ground.

Real Betis were the next team to come to town and a goal either half from Rodrigo and Zaza separated the two sides, to give Valencia the double the season over their Andalusian rivals.

Whilst Valencia have a nice cushion over Villarreal and Sevilla for that Champions League spot, a poor run of form has seen Levante dragged into the relegation dogfight. With the likes of Real Sociedad, Alaves and Espanyol seemingly out of the danger zone it seems it will be three from Levante, Malaga, Las Palmas and Deportivo La Coruna that will face the drop. It may well come down to the head to heads between the clubs. Presently, Levante’s match ups are no better than par against all three of their rivals.

Forthcoming home games with Eibar and Las Palmas will be crucial in the final outcome, especially as the two final home fixtures for Levante are against Sevilla and Barcelona respectively.

John Howden
Anyone wishing to get tickets for Valencia or Levante games can do so by visiting the ticket offices at the stadiums or through the respective websites.
www.valenciacf.com
www.levanteud.com