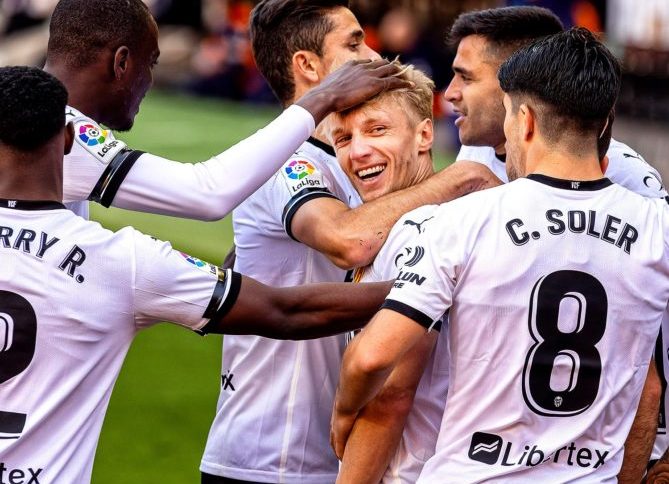 ##La Liga was curtailed at the latter part of March for an international break, just as Valencia were finally beginning to eke out the results required to ease any relegation worries.

Home wins over Villarreal and Granada by the same score line (2-1) had put some light between Valencia and the bottom three, and a comfortable mid-table position looks to be the most likely outcome for 2021.

However, a large number of the Valencia faithful are still moaning and groaning at certain individuals, and the overall team performances… most noticeably, after the local derby defeat at the hands of Levante UD.

All of these three matches were entertaining, but simply lacked the flair and creativity on the part of Los Che that the fans are yearning for. In general, Gracia’s teams tend to be conservative in their approach to all games and that is unlikely to change at any time in this season’s league campaign.

Numerous players from both Valencia and Levante will received little respite from playing though, as several of them were involved in international contests throughout Europe.

Jasper Cillessen had been picked to start for the Dutch in their World Cup qualifier in Turkey only to injure himself in the warm-up, forcing Tim Krull to replace him in goal. It turned out to be a really bad night for Holland who surprisingly lost 4-2 in the Ataturk Olympic Stadium. The Lille striker Burak Yilmaz, bagged a hat-trick for the hosts.

Thierry Correia started for Portugal’s Under 21 team in their 2-0 defeat of England in Ljubljana, which contributed to the young three lions early exit in the group stages of the European Championships. His fellow countryman Gonçalo Guedes, was not picked by the Portuguese coach for their three World Cup qualifiers against Azerbaijan, Serbia and Luxembourg.

So, whilst Ronaldo was remonstrating with the referee and throwing down his armband in disgust at having a winning goal not given in Serbia, Guedes was house-hunting and posting selfies on social media of himself and his girlfriend on a weekend break in Ibiza.

He was not the only footballer seek refuge elsewhere, as the Real Madrid full back Marcelo was photographed with his family at Malvarrosa beach. As a consequence, the Valencia regional government have launched an investigation and plan to fine the Brazilian heavily for not adhering to the current travel restrictions that prohibits a resident from Madrid to leave the Comunidad de Madrid and enter the Comunidad de Valencia.

Although Uroš Račić did not play for Serbia against Portugal he did start in the preceding World Cup qualifier against the Republic of Ireland, which the Serbs won 3-2. It was his full international debut and he lasted just over sixty minutes before being pulled off with an injury. Along with Cillessen, they both may struggle to find much more playing time this season with Los Che because of these constant fitness concerns.

Gabriel Paulista’s confirmed change of nationality from Brazilian to Spanish did not see him find a place in Luis Enrique’s squad for the qualifiers, and Carlos Soler missed out too. Jose Luis Gayà was picked, despite a recall for Jordi Alba and played in the home draw against Greece. Only six of Spain’s twenty-four man squad came from the big three (Barcelona, Real and Atlético Madrid) reflecting the general feeling throughout the country that the other clubs are fast closing the gap on La Liga’s usual suspects.

Daniel Wass continues to be as versatile as ever for club and country and starred in Denmark’s victory in Israel. Kang In Lee was not so fortunate and his long trip to Yokohama resulted in a second half substitution and a heavy defeat for South Korea against Japan, in what was a somewhat meaningless friendly.

One of Valencia’s successes this year has been Yunus Musah in his rookie season. He has already broken into a vastly improving United States team, that is undefeated in nine games. He started in Belfast and played in the first half of the 2-1 victory, for the Stars and the Stripes, against Northern Ireland.

Two of Valencia’s youngsters Hugo Guillamón and Patrick Cutrone squared off against each other for their respective countries in a feisty goalless stalemate in the neutral Slovenia, that saw three players sent off. Both Valencia stars were substituted before the end of the game, with Guillamón once again picking up a booking to add to his already worrying disciplinary record.

Cutrone did find the back of the net twice for Italy in their next game against Slovenia, and will come back to the Mestalla eager for a chance of first team football.

Arguably, the best performances from local players throughout the international break were from Dani Gómez Alcón and Enis Bardhi. Gomez, the youngster from Alcorcón signed for Levante UD from Real Madrid B last summer. He has been tremendous for the “Granotas”. He replicated this excellent form for the Spanish youngsters in their match against the Czech Republic Under 21 side, scoring a brace in their 2-0 success. This ensured that they advanced to the quarter-final stages of the competition.

Bardhi is one of the first names on the North Macedonian team sheet and he set up their first goal for the Genoa striker Goran Pandev just before half-time. The Macedonians eventually won the game in Duisburg 2-1 to create a major upset. It was the first time Germany had lost a World Cup qualifier since September 2001 when England put five goals past them, and a certain Michael Owen scored a hat trick.

After Easter, the league action continues with Valencia travelling to Cadiz and Levante entertain Huesca at the Estadi Ciutat de València. Both clubs will be hoping for no further nasty surprises in terms of injuries and illnesses when everyone has returned, and is back in training, from the international break.