You are here: Home  /  Editorial  /  Easter at the Beach in Valencia (Pre-Covid)
Editorial 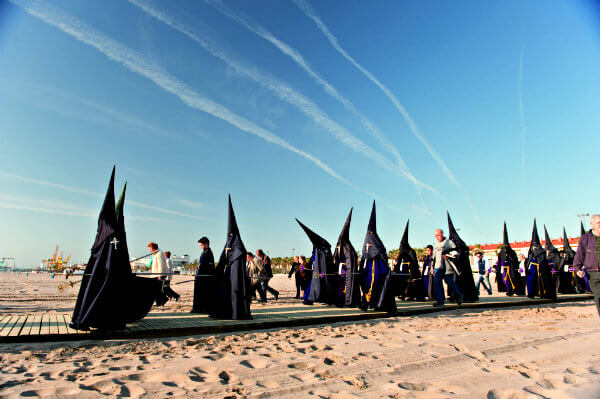 Easter at the Beach in Valencia (Pre-Covid)

##All that remains of the old Barcelona railway tracks, which used to cut off the Cabanyal and the other sea front areas from the rest of the city, are a few spaghetti western style stations in Boulevard de la Serreria. The lines now go underground but the years of separation have meant that the “Poblados Maritimos” have always seemed to try to do their own thing.

The city of Valencia doesn’t really go for it at Easter. The big destinations at this time of year (pre-Covid) are Andalusia and Castille, whose Holy week processions are famous all over the world. Valencia is normally only just recovering from its own mass festival and everyone seems to be completely Fallased-out. While the rest of city is scrambling to get out to the mountains for a bit of detox and nature, you may find it’s all happening down at the beach.

There are more than 20 different Cofradias or brotherhoods in the Cabanyal who work together to organise the Semana Santa Marinera with impressive names such as Hermandad de Vestas del Santisimo Cristo del Buen Acierto or as its translated on their web site “the hooded brotherhood of the Saintly Christ of the wise move”. Many of their members have only just folded up their Fallas gear and put away their bangers for next year but, being Valencians, this doesn’t in anyway dampen their enthusiasm to start getting dressed up and parading round the streets all over again at the drop of a pointy hat.

Valencian seaside folk have a reputation for ploughing their own furrow and that doesn’t stop at supporting Levante UD football team, eating battered pescaditos by the ton and protesting against the extension of Blasco Ibañez, a battle they have finally won. In Andalusia Semana Santa is an explosion of flowers and icons, a colourful orgy of very public grief. In Castille, Easter processions are dark reverential celebrations of sombre piety. In the streets of the Cabanyal, it’s a particularly Valencian take on the whole thing. There’s no doubting the religious devotion of the Cabanyal Cofradias and there’s a de nite attempt to keep it suitably solemn, but here things tend to be a little more playful and colloquial and, this being Valencia, it’s all rounded off with the ubiquitous big rework display.

First and foremost, peculiar to the Cabanyal, the emphasis is not on the pain and suffering of the Passion, it’s much more of a sort of Resurrection cavalcade.

The icons are brought out for procession, but not for the Valencians the honour, as in other parts of Spain, of carrying the crushingly heavy wooden models on their shoulders through narrow streets, here they prefer to put the things on wheels and swan along behind them in their Sunday best.

The procession trails down the Calle de la Reina to the sound of traditional music and muted bass drum. While there are a suitable quota of Nazarenes (those blokes who look like medieval wizards dressed in long capes and cone-shaped hats and hoods), Valencians soon realised it was much more fun to dress up as a Roman soldier or a crusader.

While there might be the odd Centurian in processions elsewhere, in the Cabanyal there seem to be whole legions of them. In fact any biblical character will do including generously bearded Herods and scantily clad Salomes all of them local people with fathers and mothers passing down their part to their sons and daughters. There are games for the kids and much waving and posing for photos for the watching neighbours and families. Then it’s off to the bar for a paella where you might find Pontius Pilate at a table having a well-earned beer with Barrabas or Mary Magdalene and Judas sharing a plate of calamares. On Saturday night there’ll be a Castillo by a local pyrotechnician.

One curious aspect is that some Cofradias have the right to ask for the release of a prisoner. The powers that be consider each petition and a prisoner is released who then takes part in the procession. The Cofradias usually put forward a minor criminal from the local community. It is of course no reflection on the area that in the Cabanyal they always seem to have plenty of candidates to choose from. One story goes of a local lad who was doing time for burglary in Madrid and was then released and paraded round the streets to the great embarrassment of his mother who had told all the neighbours he was away working in Asturias…

In Valencia, to everything there is a season and Easter it is the time for flying kites. The best place for this is Malvarrosa. The sky is awash with the things over Easter weekend and the beach is littered with bored kids waiting for their dads to stop hogging the string and let them have a go or at least let them go home and play on their playstations.

No celebration would be complete without its typical food and at Easter Valencians eat Panquemados, Mona de Pascua, a sweet cake in the shape of an animal decorated with dyed boiled eggs and longaniza de pascua, similar to a pepperami in size and shape but not as spicy or oily and it isn’t made entirely of rubber and cardboard. These are usually “enjoyed” in the open air as a sort of mid- afternoon picnic often at the beach.

This article relates to ‘Easter in Valencia’ before COVID and does not reflect the actual situation in 2021.