You are here: Home  /  Sports  /  VALENCIA FOOTBALL…. STILL CAUSE FOR CONCERN
Sports 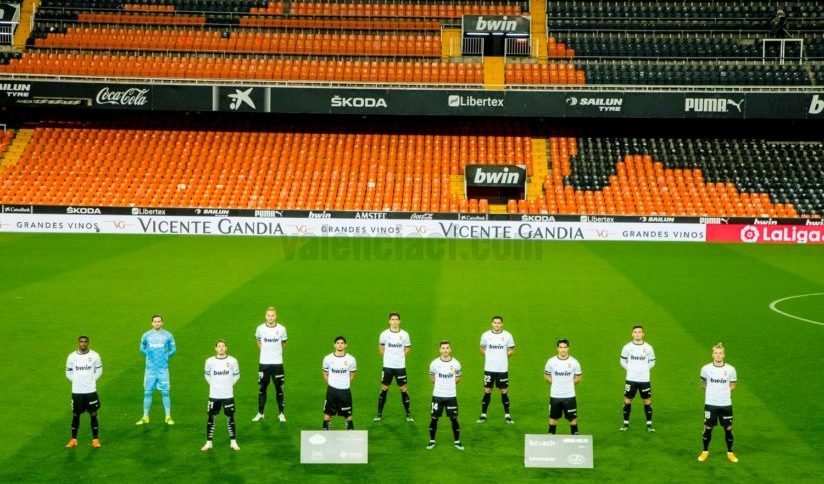 VALENCIA FOOTBALL…. STILL CAUSE FOR CONCERN

##Valencia registered a welcome win over Comunidad rivals Elche in their last match before the transfer window closed in Spain. However, the fact remains that there are several factors in the team’s play that still remain to be a cause for concern.

The first department that needs addressing is the heart of the defence. In recent years, Otamendi & Mustafi and Garay & Paulista have proved excellent partnerships. Gabriel Paulista remains one of the first names on the team sheet when fit but his cohorts Mangala and Diakhaby and Hugo Guillamón remain error-prone… and not the finished articles.

The club have also yet to find a replacement for Parejo and the lack of creativity in midfield is a major worry. Račić is industrious and has been the find of the season for Valencia…but is more a replacement for Kondogbia than Parejo.

In attack, too much emphasis is placed on Maxi Gómez. Although talented in many areas, he is not a natural goal scorer. Manu Vallejo could be the answer with time. Kevin Gameiro is a willing worker but will not guarantee you the required 15 goals plus a season a team needs from its forwards to be challenging for a European place. Javi Gracia would welcome these gaps being filled and loan deals may provide a short-term answer.

New signing Francisco Reis Ferreira (known as Ferro) could solve the centre back situation. On loan from Benfica, he is young and with pace and on the verge of winning his first senior cap for Portugal. With Paulista spending more time on the treatment table as age and injuries catch up with him… it is a forward-thinking signing, which adds further competition to an area of concern.

Also in defence, Cristiano Piccini has returned from his loan with Atalanta where he only played one game. However, with Thierry Correia starting to put in some steady performances in recent weeks at right back it hardly seems a position that was a priority to improve Los Che.

Uruguayan Christian Oliva is another newcomer. The defensive midfielder, on loan from the Italian club ‘Cagliari Calcio’ will allow Wass, Soler or Kang-In to have more space and hopefully one of the three will take the opportunity to “morph” into the role Parejo once enjoyed at Valencia.

Rúben Sobrino seems to have been unlucky not to have had more playing time for Valencia, and his move to Cadiz is beneficial to all concerned. Playing alongside Alvaro Negredo could see the Daimiel-born forward prosper and become a major force in La Liga.

The replacement for Sobrino is the Italian Patrick Cutrone, who is an interesting proposition. Playing for his nation at all levels from Under 15 and above he made his name with AC Milan before signing for Wolves in the summer of 2019. Within six months, he had been offered to Fiorentina on loan with an option to buy. He was recalled by Wolves soon after the sickening injury to Raúl Jiménez. A “true” number nine, in the style of Simone Zaza, he could be the answer to Valencia’s striking dilemma.

On the pitch, the club’s sole opportunity to gain some silverware was the Copa Del Rey. A visit to Sevilla was the team’s reward for victory over Alcorcón in the last round. Perhaps the toughest fixture Valencia could possibly receive, it was sure to test the team to the full. It was a test the team would fail miserably. Guedes had been dropped for “tactical reasons” and Gameiro was ruled out by Covid. Even with their availability, it was hard to see anything other than a loss for Los Che.

The game was over as a contest by half time with the hosts three goals to the good. Rakitic lobbed the keeper Rivero for a third goal that was reminiscent of Eric Cantona’s two chips against Sunderland and Sheffield United, which further highlighted the gulf in class.

The defeat at the Wanda Metropolitano three days before against Atlético was equally emphatic, although the Valencia fans did have something to cheer that day, thanks to a super strike from Račić.

The losses to Atlético Madrid and Sevilla in the league and Copa Del Rey showed just how far Valencia have fallen off the pace. Just over a year ago, Los Che were on par with both these clubs. At the moment, Valencia are no match for either Atlético or “Los Nervioneses”. With Barcelona and Real Madrid struggling, it would be no surprise to see them finish first and second in La Liga this season.

The plight of Real Madrid was plain to see when Levante UD visited them recently and the “Granotas” came away with three points. The current champions fielded lots of youngsters. With Ramos not playing, they looked very out of sorts at the back.

On the back of his recent 200th appearance for Levante “El Commandante” Jose Luis Morales scored a wonder goal to cancel out Asensio’s opener. The winner came from Roger Martí twelve minutes from time. It was a personal relief for the Torrent born striker. Minutes before, he had seen his penalty saved by Courtois when the teams were tied at a goal apiece.

At present, it would be hard to argue that Levante are not the top team in the city of Valencia and Villarreal not the best in the Comunidad. Three of Valencia’s next four games are away at Bilbao, Real Madrid and Getafe. So, anything less than 100% commitment and effort will see the team getting dragged back into a relegation dogfight.