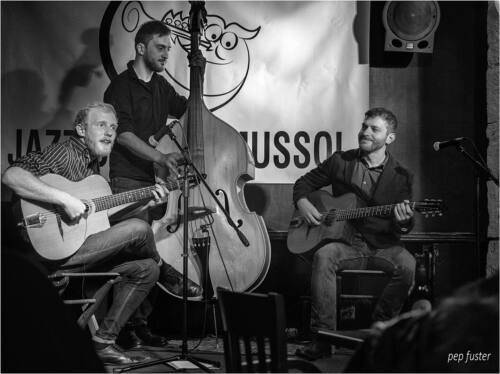 Travis Smilen was born in Plantation, Florida, USA, into a family of musicians, and was inspired by his father to try the guitar.

“I liked the sound of it, just hearing my dad play. So, it was a natural thing”, he remembers. “Then I discovered players like Jimi Hendrix, John Coltrane, Chick Corea, and other incredible musicians. In high school, I knew that I wanted to be one myself”.

Like so many others, Travis found his way to Valencia thanks to the Berklee College of Music. Before that, he had started playing manouche (European gypsy jazz) in Hawaii (of all places) around 2012 while with the U.S. Navy Band.

“I had been listening to Django Reinhardt since high school, and also more contemporary interpreters like Biréli Lagréne and The Rosenberg Trio, but it was in Hawaii that I first got to  play it live myself, and, well … I caught the proverbial bug, bought a manouche guitar soon thereafter, and got serious about learning it”.

After graduating from the Berklee master’s programme in 2015, he formed The Smilen Trio with fellow American guitarist Noah Young, another Berklee alumnus, and Valencian bass player Carlos Rubio, whom he had met at a jam session at Gestalguinos. Although they actually saw their debut concert getting cancelled, they were undeterred, and soon took stage at the Jimmy Glass Jazz Bar. They have been playing all over Valencia ever since, and also recorded their first CD not so long ago.

“People at our concerts kept asking for CDs, so we got ourselves a date with Jazztone, rehearsed for a couple of weeks, and then went into the studio where we recorded everything old school: One session, two takes”.

When pondering the future, he shares:

“We have plans for a another record, with some original tunes. Meanwhile, I’m happy teaching and playing around Valencia. It’s a great place for live music, and also conveniently close to France, the source of the manouche, where I have been fortunate to get to play with some of the best practitioners. I couldn’t do this in Florida, because there, hardly anyone knows what manouche is”.

Well, maybe not yet … but for the time being, this manouche ambassador remains stationed in Valencia, for our listening pleasure.