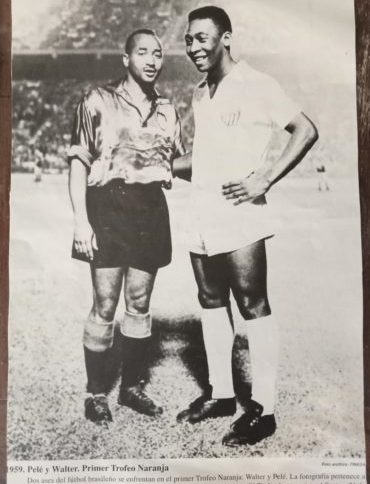 Servaas “Faas” Wilkes was a Dutch international who is regarded as one of the best players Holland has ever produced. After a string of impressive performances just after the war for the National team he very nearly signed for Charlton Athletic, only for the transfer to be blocked by the Dutch football federation. In 1949, whilst on holiday in Italy, he was approached by both Inter and AC Milan and signed for Inter before heading back to Holland. As a result of this transaction, and becoming a paid professional, he did not play for the Dutch National team again for another five years.

After Inter  Milan, Wilkes spent a year at Torino F.C who were rebuilding after the Superga air disaster. In 1953, Wilkes signed for Valencia CF and scored 38 goals in 62 appearances for Los Che over 3 seasons. In his second year at the club they won what is now known as the Copa Del Rey, although he himself did not play in the tournament due to a Francoist ruling at the time that forbade foreigners playing in the King’s Cup.

Faas Wilkes was ‘top scorer’ for Valencia CF in 1953-1954 and 1955-1956 . However, injury curtailed his time at Valencia and he left for the Dutch team VVV-Venlo in 1956. As a result of his departure from Valencia CF, the club sent their sporting director Eduardo Cubells to South America to find a replacement. Conflicting reports suggest Pelé was considered, but any potential sale was either blocked by the Brazillian government…or that Cubells himself decided that Pelé was too young and instead plumped for Walter Marciano of Vasco de Gama.

The first Brazilian to play for Valencia, Walter made an instant impact and became a fan’s favourite. The paths of Pelé and Walter crossed on 24 June 1959 in Valencia. By then, World Cup winner Pelé was already considered the best player in the world and Valencia, with the excellent relations established on the 1957 trip by Cubells to Brazil, managed to get Santos to visit Mestalla for the first edition of the Trofeo Naranja. Tragically, a dreadful car accident in El Saler (Valencia) in 1961…when travelling with team mates Socrates and Coll…cost Walter his life in the prime of his career.

Once again, Valencia sought a replacement in South America and they identified the Fluminese forward Waldo Machado as the answer. Waldo had scored 319 goals in 403 matches for the legendary Brazilian side. A renowned striker, Waldo was a great find for Valencia and helped the club win the Inter-Cities Fairs Cup in consecutive seasons in the early sixties. This European trophy is often seen as the predecessor of the UEFA cup.

A Brazilian international, Waldo also won what is now known as the Copa del Rey for Valencia CF in 1966-1967 season and was then called  Copa del Generalísimo. On a personal level, Waldo won the Trofeo Pichichi in 1967 too. Waldo ended his career at Hercules in Alicante, playing along side his brother Wanderley Machado, who had played for Levante UD for 5 seasons and scored many goals too. Wanderley was part of the Brazillian team that competed in the 1960 Rome Olympics, playing in all the matches and scoring in the 4-3 victory in the group stages over Great Britain. After retirement, both brothers lived out the rest of their lives in the Valencia community.

Interestingly, the legendary Dutch player Fass Wilkes actually returned to the city of Valencia in the 1958-9 season to play for Levante UD… where he scored 20 goals and Los Granotas were runners up in the Segunda División.

Photo: ‘Walter’ of Valencia CF and ‘Pelé’ of Santos at  Mestalla.