You are here: Home  /  Editorial  /  Sports  /  VALENCIA FOOTBALL…THE WAIT IS FINALLY OVER!
Editorial 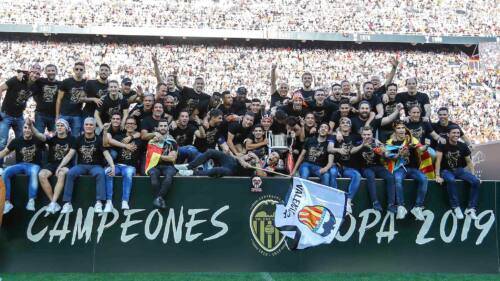 VALENCIA FOOTBALL…THE WAIT IS FINALLY OVER!

##At last ! After eleven years and 39 days… the wait is finally over. Valencia have a meaningful piece of silverware in their trophy cabinet after more than a decade of trying.

Valencia beat Barcelona in the Copa Del Rey Final in Sevilla on the 25th of May, sending the city into raptures and continuous celebrations for days on end.

The last time the club has had such a successful season was in 2008. Then Gordon Brown was the Prime Minister of Great Britain and  Ronaldo was winning the Champions League with Manchester United.  Ferran Torres was an eight year old, watching his home town club defeat Getafe in that year’s Copa Del Rey Final.

Fast track to 2019 and Torres made the Valencia squad for this year’s contest,  although he had to settle for the subs bench with Guedes being preferred. Gamiero and Rodrigo bagged the two forward spots,  Jaume was named ahead of Neto in goal and Wass got the nod over Piccini for the right back slot.

Barcelona had injury worries with their maverick striker Luis Suarez unavailable. Messi, Pique and Busquets would all start… making the Catalans the clear favourites with the bookmakers before a ball had been kicked.

Within five minutes, Los Che had a wonderful chance to open the scoring. Rodrigo found himself one-on-one with the keeper. The Spanish international rounded Cillessen and looked certain to stroke the ball into the empty net. From nowhere, Piqué raced back and intercepted the ball on the goal line with an excellent piece of defending that left Valencia fans shaking their heads in disbelief.

Fifteen minutes later, Valencia did take the lead. A long ball from Paulista put Gaya in behind the Barcelona defence. His pull back to Gameiro on the edge of the area was controlled nicely by the Frenchman. His first touch created space for a shot that whistled past the left-hand side of Cillessen.

The Benito Villamarín stadium and fans zones in Valencia erupted simultaneously and the supporters dared to dream that the long wait for that elusive trophy was about to come to an end.

Valencia doubled their lead just after the half hour mark. Carlos Soler outsprinted former Valencia favourite Jordi Alba on the right flank and put a dangerous cross with pace into the six yard box. It evaded the Barcelona defenders and reached Rodrigo who instinctively headed the ball downwards. To the delight of the 25,000 Valencians in the stadium, the ball flew past the stranded goalkeeper and Los Che were two goals to the good.

Half-time came and Valencia knew there would be a backlash from the La Liga Champions in the second half. Inevitably, the main source for a Barcelona revival came in the shape of Lionel Messi. The little Argentinian created an opportunity out of nothing, when jinxing past two defenders, to hit the ball with the outside of his foot past a despairing dive from Jaume. Fortunately for Valencia, the effort hit the post and the rebound back into play was blasted over by Vidal when he should have done better.

Messi did reduce the arrears in the 73rd minute. A dynamite header by Clément Lenglet from a corner was excellently tipped onto the post by Jaume but the Barcelona number 10 was the first to react, to stab the ball home.

Valencia fans endured a nerve-wracking end to the game and five minutes of injury time did little to appease the supporters’ nerves. Finally, Alberto Undiano Mallenco blew his whistle and the Copa Del Rey was Valencia’s.

A tearful captain, Dani Parejo collected the trophy and the players celebrated in style. An open-top bus parade from the airport  culminating in a reception at the Mestalla followed the next day, once the squad had returned from their base in Jerez.

The road to the final had been an arduous one. Struggling to get past plucky Ebro, followed by a favourable draw that pitted the club against the lowest ranked team left in the competition, Sporting Gijón. The miracle of Getafe and then having to overcome Real Betis in the semi, when the final would be played on their home soil. Valencia never gave up and were rewarded for their efforts.

By winning the Copa Del Rey, Valencia will be given a bye in the first two rounds of next season’s competition. The format is also to be changed to a single match until the semi-final stages. The winner will also be assured of a place in the Europa League.

The club will now look to challenge more vociferously the Spanish Football Federation’s ruling that four teams will contest the Super Copa next season.

Real Madrid, Atlético Madrid, Barcelona and Valencia will go into a draw to see who plays each other in a semi-final, with the winners playing off against each other. To make matters worse, the idea is to possiblly play all the matches in Saudi Arabia not Spain. The dates for the new look tournament are set to be mid-January. On the plus side Valencia can expect to make more than a million euros from their presence in the competition.

La Liga clubs have voted overwhelmingly against the concept but both the Spanish Super Cup and the Copa Del Rey are controlled by RFEF, so this plan remains well and truly in place at this moment in time. Expect this controversial saga to run throughout the summer months and hostility towards the idea gain momentum.

Valencia’s quest for a European trophy this season unfortunately fell just shy of a final appearance in Baku. However, Arsenal´s 7-3 demolition of the team in the Europa League semi-final was incredibly frustrating because the Gunners were distinctly average in both legs.

On the plus side, Valencia did guarantee Champions League football at the Mestalla next year with a fourth place La Liga finish. A victory over Valladolid in the last game of the season ensured the team stayed ahead of Getafe and Sevilla, to claim the coveted prize of entry into Europe’s most prestigious club competition.

Reflecting back on the centenary year, the fans will be relatively happy with the outcome after a sluggish start to the league campaign. The captain Parejo has been immense this year, winning over the fans after being subject to jeers and criticism in the past. Rodrigo now is the player that divides the supporters. Ineffective and sulky at times, he does have the ability to score important goals.

Barcelona are sniffing and a substantial offer from the Catalans might be enough to get the club to sell the Spanish international Denis Suarez could be potentially used to sweeten the deal as Marcelino is an admirer of him from their time together at Villarreal, and the Colombian international Radamel Falcao is being touted as a target for the club by some of the national sporting newspapers.

The club will also have to make a decision on whether to continue with the services of Roncaglia and Chéryshev, on loan from Celta Vigo and Villarreal respectively. After two years in the wilderness, the forgotten man Aymen Abdennour will be returning from Marseille unless the club can find a buyer.

Meanwhile, Levante UD are keen on acquiring Ruben Vezo on a permanent deal. The young Portuguese defender has had a successful loan spell with Los Granotas and has been instrumental in shoring up the defence in the latter part of the season.

With another season in La Liga confirmed for the club from the north of the city, Vezo may decide the time is right to leave the Mestalla for guaranteed first team football.

Jason is bound for Valencia. The agent for Campana and Toño is making noises about possible transfers to more fashionable clubs, and Mayoral is also returning to Real Madrid, so expect a lot of wheeling and dealing from Levante in the summer months.

With two teams from the city still in La Liga and Villarreal just  up the coast, you can expect 2020 to be another top class year for watching football in the Valencia region.