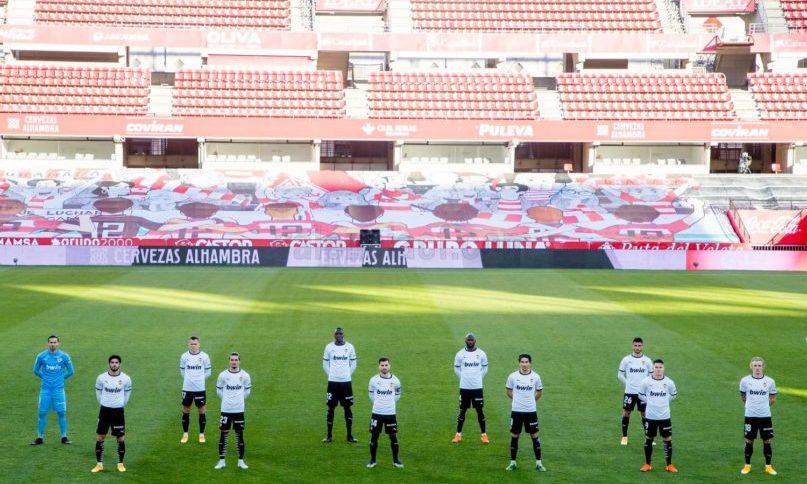 ##Valencia Football Club enter into 2021 with a mid-season crisis on their hands. Lingering at the foot of the table, and devoid of confidence, experience and discipline… the club have now reached their tipping point at which to salvage something from this campaign.

The last league game in 2020 against Granada, in Andalusia, highlighted their shortcomings. The visitors started brightly and took the lead through Gameiro, ten minutes before the interval.

Increasingly nervy as they tried to hang on for the half-time whistle, Los Che became ever more defensive. On the stroke of half-time, the defence gave away a needless free kick in a dangerous situation. Valencia fans could guess what was coming next and, like clockwork, Granada equalised from a deflected Kenedy free kick that left Jaume stranded.

So often this season a decent 45 minutes have been cancelled out by a very poor one, game after game. The second period of this contest saw Valencia implode, with both Jason and Guedes getting inexplicably sent off. Jason was the first to go for an impetuous lash out… in an off-the-ball incident that the referee did not see. A VAR review resulted in a second yellow card and expulsion for the right-back.

The dismissal of Guedes was even more frustrating to stomach. Bustled off the ball from a strong challenge, the Portuguese star was upset not to be rewarded with a free kick. In response to not getting his own way, the winger blurted out an obscenity to the referee. For his outburst he received a second yellow card, and as a consequence, will miss the next four of Valencia’s games.

Just like the end of the first half, Valencia looked to kill off the game and “parked the bus” in front of their goal. Unfortunately, Granada found a way to penetrate the “bus” and scored the winner through Jorge Molina…with just a couple of minutes remaining.

This rare league victory for Nazaríes against Valencia moved them into European contention, whilst it left Valencia in the relegation places, after all the league games from jornada 16 had been completed.

December was disastrous for Los Che as they failed to win a single league game during that time. A goalless draw against Eibar in the Basque region kicked off the month.

However, it did arguably produce the save of the season when the home side’s Serbian goalkeeper Dmitrović tipped a screaming volley from his fellow countryman Uroš Račić onto the bar.

The next match saw Valencia host Bilbao and they played out a 2-2 draw to bag a point each. The proud Basque outfit are struggling themselves this season and made an early decision in the new Year to replace their manager with Marcelino.

Gaizka Garitano was still in charge for the Valencia game and his tactical decision to bring on Raul Garcia paid dividends when he converted a penalty to put Bilbao in front, after they had initially been behind to Soler’s spot kick.

Villalibre had equalised prior to Garcia’s strike. Valencia did manage to salvage something from the game when Manu Vallejo ghosted in, unmarked at the back post, to head in a simple chance after the Bilbao keeper Unai Simón had misjudged the flight of a Carlos Soler free kick.

Valencia’s last league game before Christmas was the daunting prospect of Barcelona in the Nou Camp. Ronald Koeman had clashed with the likes of Angulo, Cañizares, Albelda and Joaquin during his tenure as the Valencia coach and he seems to have had similar friction with some Barcelona players on his arrival in Catalunyna. Luis Suarez, Rakitic, Vidal and Umtiti were told to find new clubs and his relationship with Messi is fractious at best.

The most recent scandal that the opinionated Dutchman has been embroiled in is the accusation that the youngster Riqui Puig has been leaking information to the press. He called him out in front of his teammates, which seems to have divided the dressing room.

On the pitch, Barça are not the force of old either and that is reflected in their current league position. Valencia played well on the day and took a welcome point back to the Mestalla.

Javi Gracia’s obsession with the counter-attacking game plan worked well against Barcelona on their home soil, but becomes irritating at best when it is utilised against “lesser” teams at home.

Employing similar tactics against Sevilla did not pay the same dividends and led to a single goal defeat, that left the fans deeply unsatisfied and the social media rife with complaints.

The only ray of light in December came in the shape of the Copa Del Rey, but even that was so very nearly the darkest moment of all, in a month to quickly forget.

Drawn away at Terrassa, it looked to be a favourable draw for Los Che. Playing in the Tercera División – Group Five of Spanish football the team is probably more famous for being the birthplace of the Barca legend Xavi Hernandez than anything else.

Inside ten minutes Valencia were a goal down and then just after half-time Terrassa added a second. Molina then got himself sent off and Los Che were staring at an embarrassing defeat. It required the introduction of Carlos Soler and Guedes with twenty minutes remaining to change the game.

Soler reduced the deficit with a penalty with eight minutes remaining and then Musah, also on as a substitute, got the equaliser in injury time.

Terrassa never recovered from the Valencia comeback and tired quickly in extra-time as fitness took its toll. Guedes added a brace to see the visitors get out of jail and ensure a place in the draw for the second round matches.

Valencia learned that they will travel to Yeclano, a team based in the Murcia region city of Yecla in early January. Levante also joined Valencia in the draw after comprehensively beating Real Murcia 5-0. Their reward is a trip North to the Basque region to play Portugalete.

Stepping into 2021, Valencia’s first match was a home fixture with Cadiz. Unfortunately, it did not yield the three points the fans were baying for, as once again the team failed to fire on all cylinders.

An injury to Gameiro in the first half saw Valencia revert to a 4-5-1 shape. It proved ineffective and it was no surprise when Cadiz took the lead just shy of the hour mark.

As a response, Gracia put on three more strikers as the hosts desperately looked to restore parity. Manu Vallejo, Alex Blanco, Sobrino and Maxi Gómez all took up a forward stance in the revised 4-2-4 formation. With eleven minutes to go, the latter converted a header at the back post to relieve some of the pressure on the manager. Cadiz still looked the more likely of the two teams to get the winner as they over ran the Valencia defence on three occasions on counter-attacks, only to lack the final telling pass. With the transfer window now open, it remains to be seen if fresh faces will come to the Mestalla.

Meanwhile, in the league, Levante UD are also flirting with the relegation zone. Home wins against Real Sociedad and Real Betis have eased concerns, but the craziness of this season’s campaign suggests quite literally that every team can seemingly beat their rivals on any given day and that consistency remains a top priority if both Valencia and Levante want to avoid a worrying end to the season.