You are here: Home  /  Sports  /  VALENCIA FOOTBALL…VALENCIA CF ARE IN ANOTHER ‘COPA DEL REY’ FINAL!
Sports 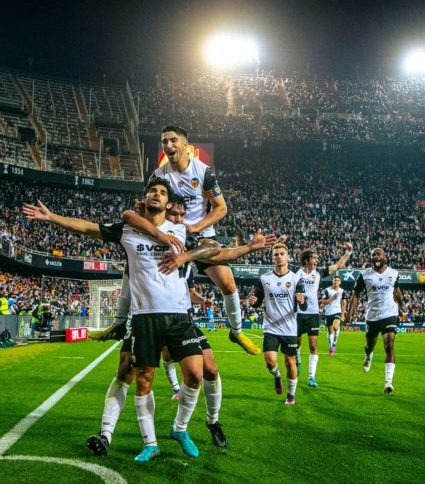 VALENCIA FOOTBALL…VALENCIA CF ARE IN ANOTHER ‘COPA DEL REY’ FINAL!

#“¡Illa, illa, illa, nos vamos a Sevilla!” For the second time in four years, Valencia fans can chant with a purpose and a passion that they are heading to Seville for another Copa Del Rey Final.

In 2019, Los Che faced the tough proposition of Real Betis in the semi-final. The task was made even more daunting as the final was earmarked to be played at the Benito Villamarin Stadium, the home ground of the Béticos.

Both of these semi-finals had vague similarities. Firstly, Valencia came from behind in the first leg to secure a score draw. Then, in the second leg, the hosts squeezed through by the narrowest of margins in both instances.

Rodrigo Moreno was the hero in 2019…and this time it was a wonder strike from Guedes that gave Valencia victory. On both occasions, the fans gathered outside the stadium and celebrated with the squad after the game late into the night.

Players and support staff looked down from the balconies of the Mestalla to the ever-swelling crowd who had come to pay homage to the manager and players; and to share in the post-match celebrations.

A mixture of firecrackers and songs reverberated on and around Calle Suecia, with the noise levels increasing whenever “Illa, Illa, Illa, nos vamos a Sevilla” was sung.

The last time Valencia won the trophy, Marcelino, the current coach of Athletic Bilbao was the manager of Valencia. Ironically, Real Betis will be Valencia’s opponents in this year’s Copa Del Rey. The team, whose roots come from the working-class suburbs of Spain’s fourth largest city, have been a revelation this year under the guidance of Manuel Pelligrini. Looking likely candidates for some kind of European competition next season, they have several playing ties with Valencia.

The graceful Sergio Canales is showing the kind of form that could earn him a place in Spain’s World Cup squad and Victor Ruiz, Martin Montoya, Andres Guardado, and the evergreen Joaquin Sánchez have all had lengthy spells during their careers at the Mestalla.

The venue itself will not be Benito Villamarín this time around. It will be the Estadio Olímpico de La Cartuja de Sevilla, known simply as ‘La Cartuja.’

The stadium is a multi-purpose venue, with a capacity of close to 58,000.  It is the sixth largest sporting stadium in Spain, and played host to the 2003 UEFA Cup Final between Celtic and Porto. The game is scheduled for April 23rd at a time to be decided.

Meanwhile, in the league, Valencia continue to plod along…treading water but making no real inroads towards a position that will guarantee European football.

Defeats to Alavés away and FC Barcelona at home dented progress, but a recent victory in the Balearics at Mallorca helped a lot as the teams around Valencia in the table all managed to drop points at the same time.

The next four matches, home and away, are against teams lower than Valencia in the league, highlighting the opportunity to make an assault on climbing up La Liga table in March.

Levante UD have been doing just that recently. Although they are still firmly planted at the bottom of the table, an unlikely victory in the Wanda Metropolitano has renewed the hopes of a miracle escape from relegation for Los Granotas.

They followed up their victory against Atlético Madrid with a fighting point in Galicia. Roger Marti scored eight minutes from time to cancel out an opening strike from Celta Vigo’s Franco Cervi, midway through the second half.

The unexpected result against Diego Simeone’s men may be the highlight of the season to date, but Levante arguably played their best football of the season in the 3-0 demolition of Valencian neighbours Elche.

“El Comandante” José Luis Morales played his 300th appearance in that game and was presented with a framed shirt in recognition of this landmark prior to the start of the game.

The Madrid born striker had further reason to celebrate when he opened the scoring just before half time. Further goals from Jorge de Frutos and Gonzalo Melero ensured the three points stayed in the North of the Comunidad, and Elche’s miserable day was further compounded by the sending off of Gumbau for accumulating two yellow cards.

Still numerous points from safety they must look to at least get positive results from the next two home games, against Espanyol and Villarreal respectively. Any points picked up in the Basque region against Athletic and Osasuna are also likely to be required if Levante are to continue their quest to remain in La Liga next season.

Currently, Villarreal are the only club in the region flying the Valencian flag in Europe. Their Champions League clash with Juventus is delicately poised, moving into the second leg.

The first leg of the encounter ended in a 1-1 draw with Valencia’s former skipper Dani Parejo capping off a fine performance with a second half goal for the “Yellow Submarine”.

Juventus had scored in the first minute of play with a goal by the Serb Dušan Vlahović. The “Old Lady” will start as firm favourites in Turin but do not bet against Villarreal getting the result to earn a place in the quarter-final draw later this month.