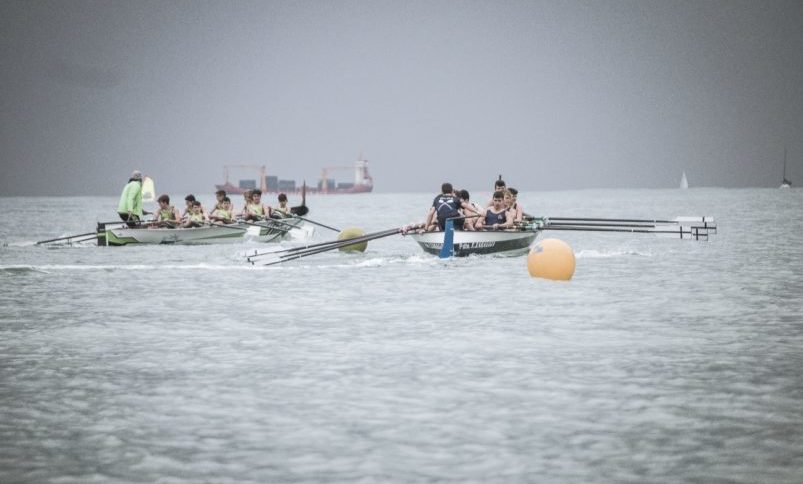 The competition reached its halfway point with a day full of emotion and effort, which passed off normally throughout the morning and in which the morning and in which a high competitive level was seen in all categories. Real Club Regatas Alicante was the main protagonist, winning four of the ten races, while the rest of the podiums were very distributed. A total of 56 boats, more than 500 athletes and fifteen clubs from the Levantine coast wrote the script for a great rowing spectacle.

Real Club Regatas Alicante won in the men’s group and both teams repeated their victories from the previous regatta. The Alicante also won the cadet men’s race, while the young women from Club Náutico Santa Pola won in this age group.

The battle for the first position in the junior women’s race was very close and fell on the side of Real Club Náutico Gandía, which is now the leader in the general classification.

In the men’s race, Real Club Regatas Alicante won  comfortably and adjusts the fight for the final title.

The absolute races closed the day of rowing in Valencia, with the start of a total of nineteen teams.

The university club did manage to win the men’s start, which presented a men’s start, which presented a high-level battle in the upper zone. The difference between the
first and second, which was Real Club Náutico Valencia, was just one second and six hundredths. Boat A of Real Club Náutico Denia finished third. It is the first victory in the absolute category for these two teams, so far in the competition, which puts the overall which makes the general classification red-hot. In addition, the hosts came out victorious in the confrontation with their neighbours Club Remo Ciudad de Valencia in the mixed gender category.

The next meeting of the Mediterranean SUMA Fixed Bench League will take place on the weekend of 12 and 13 March in Alicante.