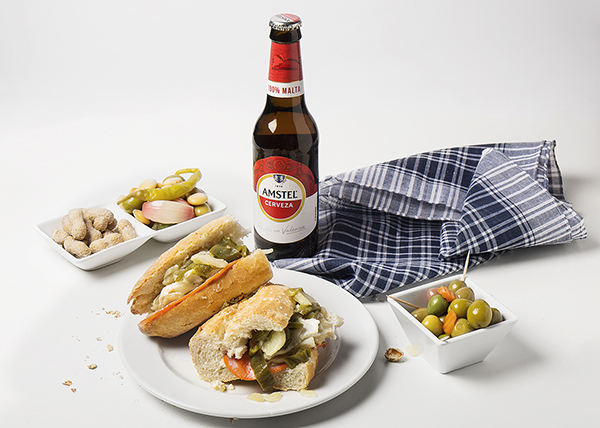 #If you have attended or participated in Fallas before, you’ll know that sharing a lunch together (maybe even paella), is a communal highlight. That is why the brewery Amstel has started the movement #EsmorzàOficialJa, petitioning the Juna Central Fallera to include the famous ‘L’Esmorzà’ Valencian lunch in the official Fallas festivities calendar.

‘L’Esmorzà’ has become more and more popular in recent years, and is a communal lunch which brings together falleros, Fallas enthusiasts, neighbours, and visitors. La Plantà is when the falleros work through the night of the 15th to erect their fallas by the morning, which makes the 16th the perfect date for the official ‘L’Esmorzà’, when falleros and enthusiasts alike can refuel by sharing a meal together.

As well as the #EsmorzàOficialJa hashtag, you can see Amstel’s posters and graffiti around the city that promote the movement. Even more exciting is the raffle for citizens and festival committees, where hundreds of free lunches and t-shirts with the slogan ‘esmorzador’ will be available to win!  You can enter the raffle by ordering lunch with Amstel beer, and submitting a photo of the drink or receipt on their website www.amstelfallas.es.

Participants who support ‘L’Esmorzà Oficial’ will also be able to choose their favourite falla, and the one who receives the most support will win a donation from Amstel to the entire Falla for next year’s fiestas. Vote for your favourite Falla this year, and they could win a donation that helps them create something even more spectacular for 2023!

Amstel has had a relationship with the Junta Central Fallera and the festivities for more than four decades, so this new movement to support Fallas comes as no surprise. Amstel has sponsored municipal pyrotechnics, promoted initiatives that highlighted elements such as the Valencian silk of the costumes, and was a loud voice that joined the successful call to support the declaration of Fallas as Intangible Heritage by UNESCO. Further than Fallas, Amstel has supported sustainability in Valencia through their Cañaveral Project, which has enabled more than 300 million litres of water per year to be returned to L’Albufera.

Join the #EsmorzàOficialJa movement and win prizes, choose a Falla to receive Amstel’s donation, and support the traditional Valencian lunch getting its own day of appreciation!

Enter the raffle at www.amstelfallas.es