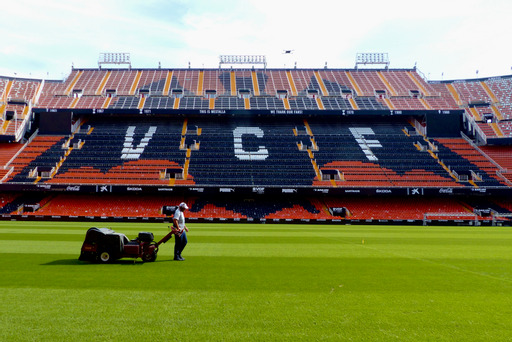 Passionate about football? So are we. Last week, we were ecstatic to learn we’d been invited by Valencia CF on a guided tour around their historic Mestalla stadium. Not only did this give us the opportunity to take some exclusive pictures and videos around the grounds, but we also learnt a great amount of information about the history and inner-workings of the club.

The tour began as we were lead to the VIP section of the stadium’s seated area. We noticed there was a statue of a man sitting in one of the seats, and asked the tour guide what the story behind this was. He explained that the statue was erected to commemorate Vicente Aparicio, a die-hard fan of the club who attended every game. Despite losing his sight at age 54, he would still attend every single match, simply enjoying being in the presence of Valencia CF and the atmosphere of Mestalla stadium. His statue represents the undying loyalty so many fans feel for this club.

We were taken into the club’s trophy cabinet, which is home to an impressive 8 Copa del Reys, 6 La Ligas and 3 UEFA’s amongst many others. The early 2000s is where a significant number of these trophies were won, and our guide said they hope to see a similar winning streak return within the next decade.

We then reached the changing rooms of the team, and tour guide told us an interesting story about the psychological tricks a manager used to get the best out of their players. He said that the rooms were once luxurious, designed to make the players feel comfortable and well treated. However, the manager noticed his team being too relaxed and becoming distracted from the game they were about to play. So, he stripped the locker room of all its furnishings, took down all the mirrors, leaving only the bare essentials remaining. Now, when the players were there they could only focus on one thing; football. Rather craftily, he did however equip the opposing team’s changing rooms with lavish furniture and equipment, in an attempt to distract them in their aims to beat Valencia CF. The name of the manager? Rafa Benitez!

Our tour then came to an end; as we were led through the tunnel and onto the pitch where the manager would stand and shout instructions to players during games. Seeing the Mestalla from this perspective made the stadium feel awe-inspiring and remarkable, and in that moment it became obvious why Valencia CF supporters feel so passionately about their club.

Article and photos by Tom Bache