You are here: Home  /  Sports  /  VALENCIA FOOTBALL…VALENCIA CF START LIFE UNDER BORDALÁS WITH A VICTORY
Sports 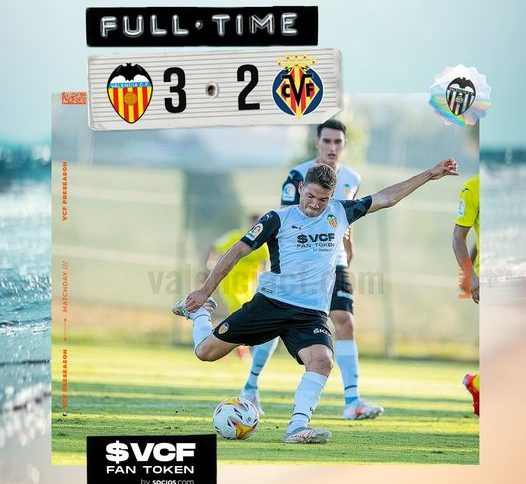 VALENCIA FOOTBALL…VALENCIA CF START LIFE UNDER BORDALÁS WITH A VICTORY

##Valencia CF reversed a two-goal deficit to beat Villarreal CF by three goals to two and give their manager Jóse Bordalás a winning start with his new club.

The team’s first game of the season was played at the wonderful Oliva Nova complex, behind closed doors in raging temperatures, despite the early evening kick off.

Los Che decided to make all their European Championship and Copa America participants unavailable for the game with the exception of Denis Cheryshev, who started on the bench. Kang-In Lee and Carlos Soler were also missing, on Olympic duty with their respective countries.

Cillessen took charge in goal, with debutant Alderete paired with Paulista in the middle of defence. Correia and Jesús Vázquez flanked the central duo with Guillamón playing just in front of the back four.

Racic, Diego Lopez and Fran Pérez started in midfield, with Yunus Musah given the responsibility of playing up front with Ruben Sobrino for the first time. The youngster from New York had a lively first half, and did not look out of place in this unaccustomed position.

The first ten minutes were played almost exclusively in the Villarreal half with Valencia adopting an aggressively pressing game that one does not normally associate with pre-season friendlies. Racic and Guillamón were especially snappy with their tackles and it was no surprise that the latter was the initial name in referee Gordillo Escamilla’s note book.

The first real chance for Los Che came half way through the first half when Musah ran through from the left side towards Rulli’s goal, only for Villarreal’s Europa Cup hero to smother the effort and concede a corner.

The longer the first half went on the more Villarreal took control and the warning signs for Valencia got stronger, as Cillessen was forced to make a couple of fine saves.

Right on the stroke of half-time, the Yellow Submarine took the lead through the former Liverpool left back Alberto Moreno. Right back Rubén Peña created a chance for himself by cutting inside from the wing and striking a fine shot that beat Cillessen, but cannoned back out into play off the post. Moreno was the first to react, and his shot gave the Dutch goalkeeper no chance as he tried to reset himself for the rebound.

Almost immediately after the goal, the half-time whistle blew. True to form both managers tinkered with the squads, with Villarreal changing all eleven players and Valencia eight from their starting line-up for the second period.

Cillessen remained in goal and Musah dropped back into a deeper role just behind the forwards, whilst Correia switched to left back to give Piccini his preferred right back spot.
Jorge Sáenz, Guillem Molina, Adrí Gómez, Cheryshev, Manu Vallejo, Diakhaby and Adriá Marí were the other players to commence the second half.

After 15 minutes of midfield play and little activity in either goal mouth, Valencia had to make an unplanned substitution when Piccini had to go off with an injury. Jason Remessseiro, who played under Bordalás at Getafe entered the frame, but almost immediately Villarreal stretched their lead.

Parejo played a nice one-two from a free kick before crossing into the penalty area. The ball reached Jorge Cuenca and the Madrid born defender rattled the net with a finish that any striker would have been proud of.

Valencia immediately responded and reduced the arrears within a minute of the restart. The ball soon landed at the feet of Jorgensen, after a Valencia attack broke down. The Swedish stopper tried to avoid the advancing Manu Vallejo with his clearance but was sluggish in his effort, and as a result, the ball hit the Valencia forward as he turned his back against the ball.

The ball spiralled high but no distance at all. The Cadiz born striker responded quickest and took one touch to control the ball and create a little space for himself, before neatly slotting past the advancing keeper.

Valencia continued to press and with four minutes remaining equalised. Cheryshev, wearing the captain’s armband took two corners in quick succession. The first amounted to nothing, but the second found Musah at the backpost, and his effort hit an outstretched arm of a Villarreal defender.

The referee was well placed and had no hesitation in pointing to the spot. Up stepped Manu Vallejo, and he sent the keeper the wrong way to give both teams parity.

In the fourth minute of injury time, Valencia found a winner. A surging run by Jason took him to the by-line and his cross was met by Cheryshev at the front post. With hardly any angle at all to play with, he adjusted his body to hit a cracking volley past Jorgensen at his near post. Already Valencia have a goal of the season contender.

Two passes into the restart and the referee blew the final whistle. A great work out for both teams with over 20 players getting some game time.

Villarreal have a relatively short pre-season this year. They now go to the Bozsik Aréna to take on Budapest Honvéd , and then they head to France for a match up with Olympique Marseille.
Their last game before they start their league campaign at home to Granada is the European Super Cup in Belfast against Chelsea.

Valencia play more friendlies than their Northern neighbours but have much less travel to contend with.

Matches on Spanish soil with the Greek side Atromitos, and then contests with Cartagena, Zaragoza and Levante are followed with a trip to premier league newcomers Brentford. Three days before Los Che head to West London they will play AC Milan at the Mestalla on August the 4th in the Trofeo Naranja.

Valencia then play their first league match of the 2021-22 campaign. ironically they play hosts to Getafe, the former club of Bordalás. By that time, fans should know if the Alicante born trainer plans to use the aggressive “Wimbledon Crazy Gang” style tactics that he used in the South of Madrid with Valencia as well, or if he will adopt a more “easier on the eye” approach to their style of play.

Although the latter would undoubtedly be the preference of the fans, it is more likely that a fusion of both will be the answer. That still will give the “socios” some hope of getting back into European competitions sooner rather than later, and also help them forget the many disappointments, on and off the pitch from last season. Whatever, option Bordalás takes, interest and aspirations are once again high as a new dawn rises.