You are here: Home  /  Sports  /  VALENCIA FOOTBALL…WHAT DOES THE FUTURE HOLD?
Sports 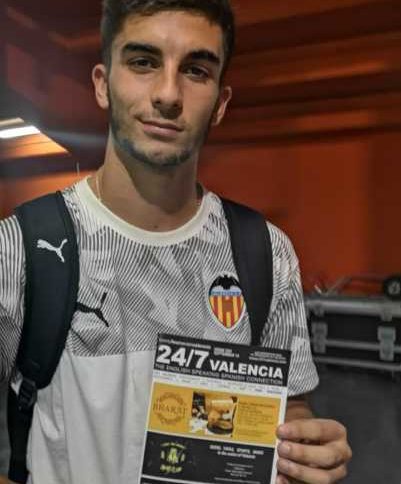 VALENCIA FOOTBALL…WHAT DOES THE FUTURE HOLD?

With the coronavirus continuing to bite into large chunks of the La Liga season until June, the back pages of the tabloid newspapers have become increasingly fanciful and desperate with their transfer gossip… in an attempt to fill their pages and engage the readers.

Valencia Football Club have not avoided this unwanted attention with Rodrigo, Kondogbia, Ferran and Carlos Soler all supposedly bound for imminent Premier League action and David Silva, Juan Mata and Vicente Guaita all potentially poised for a return to the Mestalla.

Kondogbia and Rodrigo would be good business if the money was right and the rumours manifest into concrete action. On the other hand, to “cash in” on the local boys Ferran and Carlos would be madness personified if the club really have any kind of major trophy aspirations.

Football history suggests that the recipe for success is that you can either buy it or build it from within your junior ranks. Valencia CF, despite Peter Lim’s millions, are not capable of competing with the “high rollers” like the “Galácticos” of Real Madrid, but they can compete with every major club in football when it comes to creating a positive future from within their academy.

Celtic won the European Cup with a starting eleven that were born within commuter distance of Glasgow, and the Ajax team of the early 1970s dominated the European stage and provided the backbone for a National team that reached two consecutive World Cup finals. With Johann Cruyff’s influence, Barcelona copied a blueprint of the Ajax youth system and ‘La Masia’ was born.

In recent times, Valencia have created “a farmhouse” of their own to be proud of. Isco, Angulo, Raul Albiol, Mendieta, Paco Alcácer, David Albelda and David Silva are just a few that have all learnt their trade in the city’s backyard. Amazingly, the club seem to have got the production line of attacking left full backs off to a fine art. Juan Bernat, Jordi Alba, José Luis Gayà and Toni Lato have all graced the left touchline of the Mestalla in recent years to good effect.

The current crop of youngsters that have come through the system and broken into the first team in the last couple of years have been Kang-in Lee, Carlos Soler and Ferran Torres. There is also a case to argue for Jaume Doménech to be included in that group too, although technically he was introduced into professional football by Comunidad rivals Villarreal.

What of the future and the current Valencia-Mestalla players that the club should be looking to get tied into a long-term contract? They have nothing less than huge buy-out clauses as their only escape route…

Alex Blanco, at present on loan to Real Zaragoza, has already played for the first team debuting against Ebro in the winning Copa Del Rey campaign. He came on as a second half substitute for Kang-in and showed poise and maturity beyond his years. With a footballing pedigree, (his father Tito played for the city neighbours Levante) the Benidorm-born winger recently signed a contract extension with Los Che until 2021.

Javi Jiménez is another who has tasted first team football. The local lad did not have the best of starts, deflecting a shot through his own goal on his debut but the defender seems to have what it takes to make the grade. Next season could prove a pivotal year for the Aldaia born youngster.

Vicente Esquerdo is an attacking midfielder from Calpe who has also worn the first team jersey and Alex Centelles could be another one of those left backs that the club have become so famous for producing. With the club since he was eight years old, he is presently out on loan with the Portuguese outfit FC Famalicão.

However, one of the players the Valencia faithful are probably most excited about is Hugo Guillamón. The San Sebastián-born defender had been named in the travelling squad for numerous matches just prior to the enforced break. Ironically, he made his La Liga debut for Los Che in February at the Aneota stadium in his home city against Real Sociedad.

This quintet definitely has the potential to emulate the Manchester United’s class of 92 given the chance. What is needed is the stabling presence of someone like “Voro” working with them behind the scenes to keep them patient and grounded, but above all prevent them leaving the club they love way too early, like Fran Villalba and Gonzalo Villar recently did.

Valencia could live to regret their decision to let this duo depart in the same way they now rue the missed opportunity they had with Isco.

Finally, there is the case of Carlos Pérez. He is arguably the real jewel in the “Valencia-Mestalla” crown. The potential star from Almàssera has been training with the first team, but has also been reportedly stalling on a renewing a contract (his current one expires at the end of June 2020). Some press releases suggest that he signed a further contract extension in February for one year, whilst other newspaper reports continue to dispute that.

If Valencia do only one piece of business during the enforced lockdown then it should be to work on getting the youngster tied down to a very long term deal.he players are in place with the “B” team to take Valencia forward into the future. Building the team around this local talent must become the mantra for the club when the new norm evolves.

Levante’s philosophy will undoubtedly remain the same. A tried and tested formula of astute loans and competent journeymen to ensure La Liga status year in, year out. Glue this together with a marquee transfer out every other season like Jefferson Lerma to swell the club’s coffers and keep the financial situation stable. A successful tilt at a European spot in the future would be the icing on the cake.

Finally, ‘24/7 Valencia’ would like to pay tribute to the late Michael Robinson, the Leicester born expat who managed to cross the Anglo-Spanish boundaries better than any. The former Republic of Ireland international passed away at the end of April after a long battle with cancer that had metastasized. He cemented his place in sporting folklore with Spanish fans when celebrating a goal with Osasuna in the Santiago Bernabéu by mimicking a matador. Substituted later in the game, the stadium rose as one to applaud his exit from the field.Some years later, he had just finished interviewing Seve Ballesteros over a lunchtime meal. The pair left the restaurant together and walked onto a Madrid street, soon to be spotted by a group of fans asking for their autographs. Later that night “Robin” (as he was known in Spain) phoned up one of his best friends, Graeme Souness, in an ecstatic mood. Four youngsters had asked for his signature and only one for Seve’s. Such was the esteem he was held in his adopted country.

No one knows what the future holds in these uncertain times. However, one thing that is for sure is that Michael Robinson’s lasting legacy of the positive impression he made on football fans across the world will remain constant for years to come.