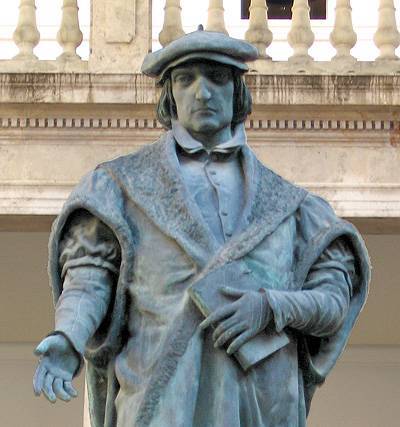 ##Despite the prejudices of the time, two Valencians of Jewish origin ended up playing a key role in renaissance Europe. One of them, Luis Vives, a true Renaissance man and fifteenth century Zelig (the bloke got everywhere) helped to develop the ideas that formed modern Europe. The other, Luis de Santangel, was instrumental in the discovery of America. Both triumphed as “Christians” having to pragmatically keep their true faith secret and both ended up being buried in Christian churches.

When Christopher Columbus went to the Catholic Kings with his madcap scheme to sail a few boats off the edge of the world in the ludicrous hope of finding a new route to the Indies, Ferdinand and Isabella thought it might be an amusing jape to find someone who’d be crazy enough to stump up the money to finance the trip. Obviously, they weren’t going to invest any of their own riches into such a crazy scheme and they weren’t exactly well known for being good at paying back debts. Fortunately, at the time they were running a nice little protection racket called “The Spanish Inquisition” and didn’t find it too hard to get people to part with their gold. So. the hunt was on to find some “socially vulnerable” rich courtier they could really lean on. Step forward Valencian Jewish banker Luis de Santangel. He was the perfect target, having been the Royal banker of choice since 1478 and a man who had actively professed his staunch support for Columbus and his ideas. His connections with the Genoese sailor went back ten years, from when he was responsible for charging trading and navigation rights to vessels from Genoa in the kingdom of Valencia. He was seen as a protector of Columbus in the court. This was a time when the Spanish were in the process of banishing all Jews from the mainland. So, just in case he was in any doubt, he was reminded that people of his “ilk” had to try that little bit harder to keep out of the Inquisition’s way.

So it was then that Luis coughed up 1,140,000 maravedies  (700 Euros in today’s money and you thought Click Air was cheap) to foot the bill for Columbus and his three ships with the Crown jewels as collateral. Although everybody knew that whatever happened… the jewels were going nowhere. As we all know the story had a happy ending, Columbus bumped into America on his way to the Indies which brought untold New World riches to the Spanish Crown. Santangel was paid back in full and was even given a share in the profits of the Inquisition. He was awarded a percentage of all revenues from goods confiscated from heretics and apostates in the kingdom of Valencia, which included some members of his own family (these were difficult times). He was also awarded the Estatutos de Limpieza de Sangre (the statute of blood cleansing) which meant he was to be considered a Christian by blood rather than a convert and ensured that he and his descendents were immune from prosecution by Torquemada and his mates.

Luis de Santangel died in Valencia in 1498. According to most chronicles, he was buried just across the river from the Torres de Serrano at the Monasterio de la Trinidad. Recent attempts to find his remains amongst the ancient bones buried in the monastery have failed. The monastery covered a much bigger area at the time of Luis de Santangel, so it’s possible that the man who financed the discovery of America is buried somewhere under the road in the Calle Alboraya.

In 1492, just when Columbus was sailing the ocean blue, the great Valencian scholar and humanist Luis Vives was born in the Jewish area of Valencia near Calle del Mar. By the age of fifteen he was already studying Philosophy at the University of Valencia. Like most Spanish students, he was still living with his mum and it was three years later that a tragic event happened which was to mark his life. The family was secretly practicing their faith in a makeshift synagogue hidden in the cellars of their home. They were discovered by the Inquisition and his mother and uncle were arrested while other family members were burnt at the stake. He was lucky enough (and rich enough) to escape to Paris where he became a teacher at the Sorbonne. It was here that he became interested in the embryonic Renaissance movement. He went on to completely reform the Sorbonne moving it away from feudalism and basing studies on the Renaissance obsessions of Classical Greece and Rome. This created a model, which is still prominent in Universities all over Europe. While he was at the University of Louvain in Belgium, he forged lifelong friendships with great thinkers of the time like Desiderius Erasmus (Des to his mates), Thomas More and Guillaume Budé. Along with Vives, they came to be known as the four pillars of humanism. Despite (or perhaps because of) his experiences, he was the only one of the four never to criticise the rule of the church.

In 1523 he went to Corpus Christi College at Oxford and was offered a job by Henry VIII as personal tutor to his daughter Mary (later to become “bloody” Mary although I don’t think we can blame Vives for that). Under the protection of Cardinal Wolsey who must have enjoyed the odd glass of Campo Viejo, he became the first person to import Spanish wine to England, which even at that time was far superior and much cheaper than the overpriced French plonk. Everything was going swimmingly until Anne Boleyn appeared on the scene. He broke all the rules as established on endless daytime TV shows and got involved in Henry’s messy divorce. As Channel Five’s Trisha could have predicted, he ended up saying all the wrong things to all the wrong people (trying to persuade Henry not to divorce and trying to persuade Catherine of Aragon to accept)  and in the process managing to fall out with everybody. Not a good idea where Henry VIII is concerned. For the second time in his life he was forced to flee a country. If last time it was his family who were left burning at the stake, this time it was his friend Thomas More.

From here he understandably opted for a quiet life in Bruges, where he became one of the first scholars since the classical era to write about social reform. Through his radical ideas on society, which inspired Francis Bacon a century later, he came to be known as the “Father of Social responsibility”.