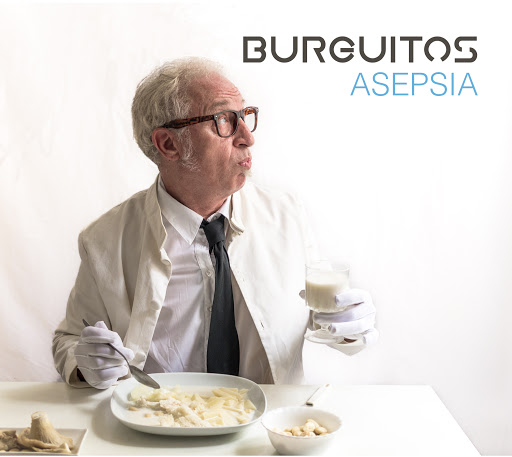 #The Valencian artist ‘BURGUITOS’ (Fernando Burgos Cólliga) has dedicated his entire life to creative ways of expression such as acting, illustration and comic book drawing. However, there is one art form that has occupied at least half of his heart since he was a teenager… and that is music and songwriting.

In the late 1970s, he made his debut with the group ‘Piedras en el Riñón’, whose name reveals the irony, good humour and creativity that characterised the nascent Valencian movida…and which would accompany BURGUITOS for the rest of his career.

In the 1980s, he would participate in the founding of COMBO POTOMBO together with Javier Calero, Manel Gimeno, Josito and Juanvi Genis, Vicente Fuster and Jordi Monserrat, an ‘avant-garde’ group that brought together various styles between pop and salsa, but always with large doses of sarcasm and a great sense of humour.

This formation would quickly give way to STILO GRÁFICO that included part of the instrumental components of COMBO POTOMBO but with Fernando as the leader of the lineup and that would bring out an album that included more releases edited by ‘Ediciones Milagrosas’ record label in the 1980s. After this short journey, Fernando (BURGUITOS) participated in a new group formed in 1986 by several members of the COMBO POTOMBO: CASTAFIORE SWING.

CASTAFIORE SWING managed to release via a Madrid label (Turboescape Records) an album called ‘La Onda Profunda’. This album of diverse influences, mixed music and humour by presenting an imaginary radio programme. In spite of the little promotion that the label gave the band, they would even play in one of the anniversaries of Radio 3, which was broadcast by TVE2 (National Spanish Televsion). The band would continue until 1989, when it was definitively dissolved…

It was at this time that Fernando decided to set up his own band ‘BURGUITOS’ and take the name in honour of his father, “El gran Burguitos”, a comedian who had toured Spain and the South of France with his shows during the difficult post-war years.

With this new band he brought together Ricardo Esteve (Spanish guitar), Ana Judith Carrasco (Zampoña, charango and voice) and Paco Bernal (percussion). ‘BURGUITOS’ would opt for releasing their records independently from then on and would focus their efforts on maintaining its presence on the Valencian scene with continuous concerts that would attract a growing number of fans.

It was in 1998 when BURGUITOS released the album ‘Agotado’, an album that reflected new influences that came from the composer’s surroundings, but maintaining essentially pop roots and his humorous character, reflecting his great skills as a showman in his concerts.

Later, in 2002, the group was enriched with European sounds by its new member, the Frenchman Matthieu Saglio, who gave the new songs on BURGUITOS the depth and beauty that only a cello can give. In the same year and with the participation of new members, ‘Burguitos’ released a new album: ‘Zoológico Imaginario’, an album that perfectly fuses Latin and African rhythms with flamenco, rock or blues without losing any of the eccentric personality of BURGUITOS and his intimate and humorous lyrics.

It would be five years before BURGUITOS decided to bring together all the songs he had been composing on stage for a new and powerful album: ‘Por los besos que me das’ (2007). At this time, the drummer Jesús Gimeno also joined the group.

‘Por los besos que me das’ is a mature and intoxicating record of new sounds and rhythms that tell us about life and people, as one of his songs says “stories of people, of everyday people”. This album by BURGUITOS has the luxury of diving into more environmental and suggestive sounds, like the one we find in the last instrumental song, “Paseo por Jaisalmer” inspired by a recording of a woman’s song in eastern Rajasthan, in India, which puts the finishing touch to a complete record by what is seen by many fans as their masterpiece.

BURGUITOS got the opportunity to expand its borders thanks to the international label ‘Putumayo’, which chose one of the key tracks (“Por los besos que me das”) for its compilation on Spanish music, together with such outstanding artists as Peret or Depedro.

The 2013 album ‘El tiempo que se retrasa’ keeps the BURGUITOS name intact, combining themes of a more relaxed and lively character with others that are deeper and more existential, so critical at times and sometimes humorous , displaying a talent that continues to be capable of fusing sounds and genres successfully.

These influences are as disparate as the flamenco that flows from Ricardo’s guitar, the Latin rhythms and the exotic Andean instruments of Ana Carrasco, the elegance and solemnity of Matthieu’s cello, the gravity of Robert Molina’s bass, and the subtle melodies of Carlos Sanchís’ accordion putting a new and daring cherry on this huge and appetizing cake, along with many other notable collaborations such as the percussion of Paco Bernal or the distinctive voices of Noelia Sayas and Nestor Isaak…

‘Asepsia’(2020) is the most recent release by ‘BURGUITOS’ … an eclectic album that was recorded and produced entirely by Burguitos and Ricardo Esteve with the help of studio digital aids plus guitars, keyboards, bass & drums. It fuses pop, electronica, Latin rhythms and rap with some acidic & streetwise lyrics as well as more romantic songs…without neglecting canciones with more of a social conscience.