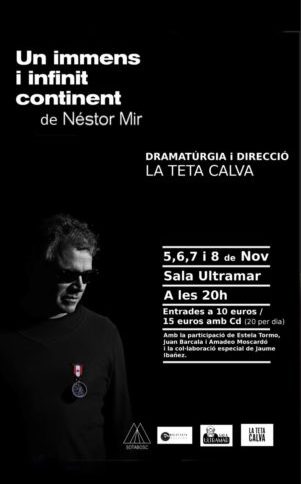 From Thursday 5 to Sunday 8 November in the ‘Sala Ultramar de València’, Néstor Mir premieres the stage adaptation of the album ‘Un immens i infinit continent.’

The actor Jaume Ibáñez will give life to the characters of a story…
The singer will be accompanied by Estela Tormo, Amadeo Moscardó and Juan Barcala

The singer Néstor Mir will premiere tomorrow, Thursday November 5th, at 8pm, the stage adaptation of his latest album, ‘Un immens i infinit continent’. The event will take place in the Sala Ultramar de València, where the performance can be seen until next Sunday 8th. On this occasion, the artist will recreate the search for an ideal place to settle down and turn his life around. This is a transcendental goal that is represented through a live concert, real, with four musicians on stage, accompanied by the actor Jaume Ibañez (Caterva Theatre) who will represent the many characters that are part of this story.

The play-concert, with dramaturgy and direction of La Teta Calva, puts on stage another existential failure of the protagonist through a tragi-comic, acidic and ironic story. The tension derived from the desire to change one’s life, the dispute between being and the desire to be, is also a book with the same title (An immense and infinite continent) that emerges from the idea of the play.

Likewise, Néstor Mir will also have the participation of the singer, guitarist and bassist Estela Tormo, founder of the band from Alcoy Júlia; the pianist Amadeo Moscardó, who has developed most of his career in jazz projects; and the producer and multi-instrumentalist Juan Barcala, from the group Cándida, who will be at the drumsticks.

The songs
The experiences and thoughts of the artist, who lives trapped in his time and space, are also reflected in a collection of songs written in valenciano. These compositions put the soundtrack to the protagonist’s journey and have their origin in Néstor Mir’s desire to go and live in Canada. A yearning that arose after the singer and his family visited that country in the summer of 2018.

In this way, the singer had a kind of epiphany by capturing a “bigger, wider, infinite, immense” reality. In contrast, Spain gave him back the image “of a small country that argued about being even smaller.” Faced with this situation, the musician realized that he needed to free himself geographically and mentally. His will to leave Spain and the impossibility of doing so was definitively expressed in this record.

The album ‘Un immens i infinit continent’ was produced and arranged by Miquel Àngel Landete (Senior i el Cor Brutal). The aforementioned Amadeo Moscardó and Juan Barcala participated in the recording, as well as Pau Aracil (Arthur Caravan, The Civil Victims). The work was released through the Malatesta Records label, founded by Néstor Mir himself.

Tickets on sale
Tickets for the show ‘Un immens i infinit continent’ can be purchased on the website of the Sala Ultramar (https://salaultramar.com/). The price of the tickets is 10€. There will also be 20 passes on sale every day for 15€ including CD.