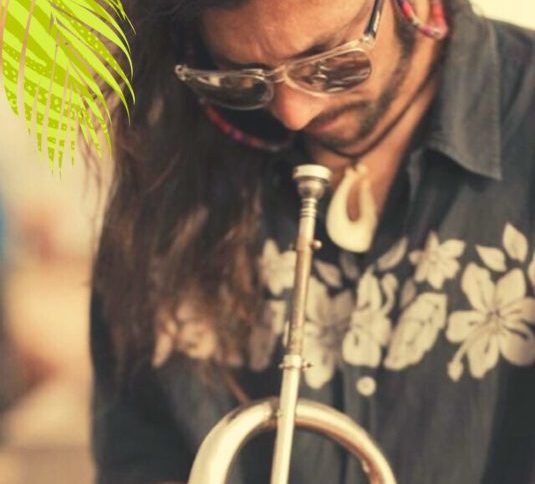 24/7 VALENCIA: COULD YOU TELL US SOMETHING ABOUT YOUR MUSICAL BACKGROUND?

NUNO ALVES: “I was born and brought up in Portugal. I trained in a music conservatory in Portugal from 1987 to 1999 and then studied and specialized in improvisation in Jazz, Latin and World music.

I was based in Valencia from 2003 to 2017. Live and over the years, I played in many venues in Valencia… like ‘Black Note’ and ‘Café Mercedes Jazz’ and ‘Jimmy Glass.’

I have recorded with a multitude of bands in Valencia… including Brazilian, Funk, Fado, Jazz and also Flamenco fusion projects.

I have appeared as a trumpeter on a number of soundtracks, including the edgy and award-winning Spanish cinema film ‘Bestezuelas’ and the national television documentary ‘Over the Sky of Azerbaijan’ with the official soundtrack by my main band in Valencia, ‘Folk-Jazz-Arabe.’

Abroad, I have played on stage with Chambao at a festival in Amsterdam and supported George Clinton & Parliament at a funk festival in Genoa, Italy. I got to meet and hang out with the great man too!

Further afield, I also played a festival in Angola in Africa. It was quite a flight and ended up being a very atmospheric & memorable concert in a packed stadium!”

24/7 VALENCIA: PLEASE TELL US SOMETHING ABOUT NUNO’S NEW PROJECT IN FORMENTERA…

FORMENTERA JAZZ FESTIVAL: On September 24th , as part of the ‘Formentera Jazz Festival’, there will be a live performance by local band ‘Yakari & Marie Connery.’

Nuno got together with keyboardist Julien Catonne and decided to form a 70s/80s ‘Jazz-Funk’ project and pay homage to masters like Miles Davis and Billy Cobham. This gave birth to the band ‘Yakari & Marie Connery’, taking advantage of electronic resources… to bring a richer and more alternative sound and groove. They are currently working on the recording of a Jazz-Funk album.