You are here: Home  /  Editorial  /  THE MUNICIPALITIES OF ‘THE WAY OF THE HOLY GRAIL’ ARE ELIGIBLE FOR EUROPEAN FUNDING
Editorial 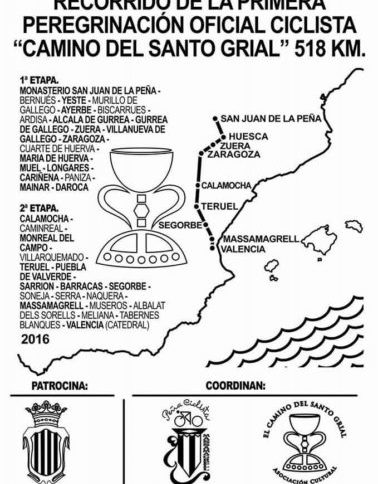 ##24/7 VALENCIA:COULD YOU TELL US MORE ABOUT THE WAY OF THE HOLY GRAIL?

HOLY GRAIL ASSOCIATION: Fingers are being crossed that the Government will support the initiative.

The National Plan for Sustainable Tourism in Destinations in its text published in July 2021 states that “…each year, in the context of the sectoral conference, one or more strategic priorities will be established in terms of national tourism policy, so that European funds can have an impact on the country’s tourism offer and the programme itself will have a common thread and overall coherence. In 2021 and due to the exceptional nature of the event, the National Tourism Sustainability Plan for Destinations will have Xacobeo 21-22 as a priority”.

In these terms, we are going to explain what is the Way of the Holy Grail and what is its relationship with the Way of St. James (El Camino de Santiago)

Christian tradition says that in the Cathedral of Compostela lies the body of St. James the Apostle. Since the 15th century (1428, or maybe 1434, a Jubilee Year is celebrated thanks to the archbishop Lope de Mendoza), Santiago is a Jubilee city every 7 or, if it is a leap year, every 11 or 5 years. Since the 1970s this route has been promoted by the Administration, to the point that it is a national priority.

Pope Francis I in 2014 granted Valencia Cathedral the celebration of a Jubilee Year in perpetuity every 5 years. In recognition of the Holy Chalice that the Cathedral has been held there since 18 March 1437. Therefore, for reasons of frequency, since 2015 ‘The Way of the Holy Grail’ is the first Jubilee route within Christianity. In terms of frequency, Valencia is placed in this ranking after Jerusalem and Rome as a Jubilee City.

Did the Minister of Tourism Manuel Fraga Iribarne know that by reviving the Camino de Santiago in the 70s of the last century he was going to position Galicia worldwide as a tourist destination in the 21st century and, moreover, that the Xacobeo would have national priority? We do not know. What is clear is that the Way of the Holy Grail needs political stature, a vision of the future and a generosity that, unfortunately, does not exist in the Valencian Community, nor in Aragon, except for a few people who, of course, lack any power because they live under the “party guidelines”.

On the 6th of September it was made public in the Valencian Community the existence of plans that allowed to apply for funds of up to 2 million euros (deadline 20th of September) directed to the municipalities, as long as they had a Plan of Tourist Sustainability in Destination.

The Asociación Cultural El Camino del Santo Grial has been working on an Integral Sustainable Strategic Plan Camino del Santo Grial, Ruta del Conocimiento, camino de la Paz with Don Bartolomé Nofuentes since 2019. In November 2019, the Consortium of the Way of the Holy Grail was presented at the Ateneo Mercantil of Valencia to seek European funding led by Dr. Ana Mafé García and the various associations and public-private entities that decided to join voluntarily.

On Thursday 9th September, Mr. Jesús Gimeno Peris, secretary of the Cultural Association of the Way of the Holy Grail prepared a meeting in the municipality of Emperador with all the Town Councils that follow the Way in the Valencian Community and that had replied to the e-mail sent to them.

The meeting was attended by Alboraya, Albuixech, Caudiel, Emperador, Massamagrell and Puçol, Barracas excused his presence. The rest of the town councils did not reply, nor did they show any interest. Nor did Turismo Comunidad Valenciana contact any of the municipalities on the Grail Route to channel the millions of euros (some 138 over three years) that it will be able to distribute via regional plans.

In order to avoid the filter of the distribution of funds from the Valencian Community – given that there has been no interest in promoting Valencia as a destination for pilgrims – and as the Way of the Holy Grail comprises two communities, all the municipalities have been presented to the National Plan which this year prioritises the Way of St. James.

The overall objective of this Sustainable Integral Strategic Plan of the Way is to position Spain as the safest country in the world for walking, with two roads and Jubilee cities (Santiago and Valencia) that make all those who have already made the pilgrimage to Compostela return to the lands of Aragon and Valencia.

To position Spain we need to invest in this Way of the Holy Grail. With the money from these plans, municipalities will create rural employment and slow the loss of population in inland municipalities. Helping the areas of Maestrazgo and Els Ports, which have the greatest poverty in terms of number of inhabitants in Spain.

By boosting the tourism offer of each municipality along the route, linked to the territory, the uniqueness of the natural, cultural and gastronomic heritage of each village is enhanced.

This investment can be used to create tourist facilities that connect the municipalitiesalong the route and also improve the digitalisation of services and products to welcome visitors: hostels, digital totems, APPs, etc.

This plan proposes the care of public spaces, making their conservation compatible with a responsible and sustainable tourist use, bringing territorial cohesion to the Way of the Holy Grail. It is intended, in short, to promote the passage of pilgrims with a sustainable, efficient and intelligent ecosystem with maximum citizen participation.

The specific objectives of the plan for each municipality that has presented it is to make the municipality a sustainable DTI within the Way of the Holy Grail. To train the business sector of the municipality in order to increase the profitability of the tourist products created with on-site and on-line training actions. Involve all the actors in the tourism system in the protection of resources, conservation of biodiversity and the capacity to welcome pilgrims through cultural activities and care of the intangible heritage. In short, to raise the quality of the destination.

The Cultural Association The Way of the Holy Grail, through its president, Dr. Ana Mafé García has made available free of charge to all municipal administrations a plan that, if they had had to pay a “tourist consultant to use” would cost thousands of euros.

According to Dr. Mafé “when it comes to handing out non-refundable European money, it is worth investing effort, knowledge and hours of work to attract them to our land. Even more so when a strategic plan is presented that includes each and every one of the requirements demanded by Europe, in a project of territorial cohesion and sustainability”.

Now it is time to hope that the filter of the Spanish Government does not ignore the most important pilgrimage route in the world for Jubilee frequency, the Way of the Holy Grail. This is all thanks to His Eminence Carlos Osoro Sierra who, as Archbishop of Valencia, requested the Holy See to grant the Jubilee for the Cathedral of Valencia in honour of the Holy Chalice, the Holy Grail.