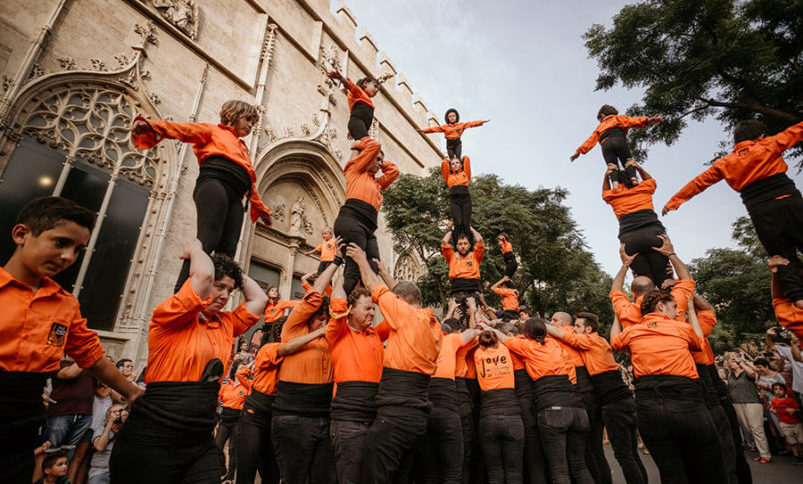 24/7 VALENCIA: Could you tell us more about the current exhibition ‘Muixeranges’?

L’ETNO: The exhibition shows the phenomenon from the festive and associative perspective and the trajectory of the traditional formations.

The construction of human figures and towers in the context of festivals is one of our most emblematic expressions. Representations that today we identify as ‘muixerangues’ and that in other places are known as the dance of the Valencians.

A phenomenon that has its maximum expression in Algemesí (in fact it is Intangible Heritage of Humanity) but which is a tradition that is widespread throughout our territory (even documented in the city of Valencia) and which, although it has been diminishing in the festive landscape, has been preserved and reborn in other towns in which today we see traditional muixerangues as part of the ritual of the festivities.

Although each of these muixerangues has its own particularities and different names (muixeranga, negrets, moixiganga, dansants and varetes), all these festive groups share the essential aspects that identify them: burlesque dancing, specific music and costumes and, of course, the performance of towers.

For some time now, we have been experiencing an interesting phenomenon of recovery: the creation of new muixerangueres formations that, with contemporary forms of associationism, have found a model to follow in the traditional muixerangues.

A tradition that expands and, inevitably, changes, renews and updates itself and where women participate, at last, on an equal footing. Now more than ever, we realise its value as a cultural and festive heritage.

What are the aims of the exhibition?

The exhibition aims to bring the spectator closer to this multifaceted phenomenon that combines tradition, new forms of association, festivity, ritual and, why not say it, a way of understanding the identity of the Valencians. It also aims to generate a didactic discourse on the codes and intentions behind the construction of the figures and human towers of the muixerangues.

Can you explain the concept of the exhibition?

The exhibition is made up of 8 sections. The first three show the muixerangues as human collectives grouped around an attractive task for its members that enjoys a great tradition and that has recently been invigorated with the appearance of new groups linked to non-religious components that are committed to the recovery of a singular manifestation that belongs to the Valencian people. In them, the spectator will learn about the work carried out by these organisations. This work requires mechanisms of participation and organisational structures, as well as group cohesion and close relationships between members, in order to build safe towers.

The other sections show the trajectory of the “muixerangues tradicionals”, entities that have been maintained from generation to generation and that are similar to each other. This group is made up of the Muixeranga de Algemesí, the Negrets de l’Alcúdia, the Mojiganga de Titaguas, the Dansants de Peníscola and the ball de Varetes de Forcall. All of them focus on the four elements that characterise these traditional groups: the burlesque aspect, the religious component, and the choreographic and acrobatic elements.

The exhibition is preceded by the sculpture Al-legoría by the artist Artur Heras, a composition that represents the muixaranguera tower from a minimalist, geometric, even industrial vision, combined with the top of a dynamic, more figurative and baroque figure.