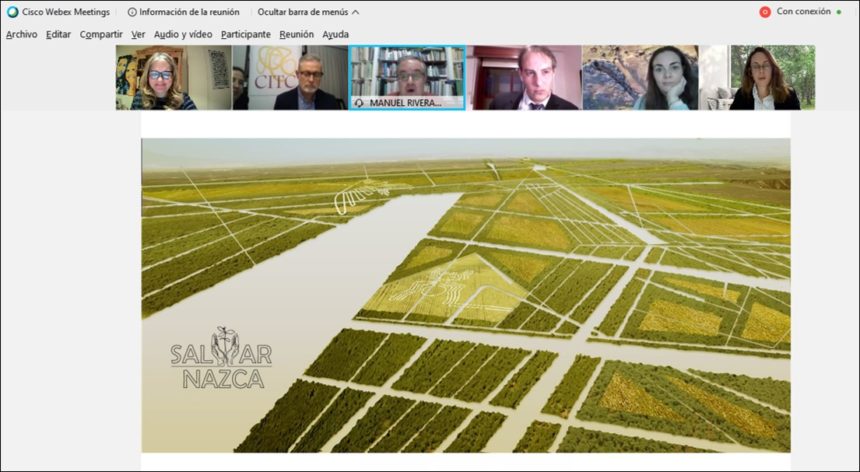 The academic article has been awarded as the best research paper at the VII International Scientific and Professional Congress on Cultural Tourism in Cordoba.

Considered by some to be one of the greatest discoveries of the century, the Nazca 2.0 system, which its authors have called Nazca 2.0, has already begun to receive awards. This week the doctor and professor of the Loyola University, Mª Genoveva Millán Vázquez de la Torre, President of the Scientific Committee of the VII International Scientific and Professional Congress of Cultural Tourism in Cordoba, where it was presented and exhibited by the Salvar Nazca team, has certified it as the best research paper of the entire congress, standing out among the more than one hundred papers presented by researchers from all over the world.

At the award ceremony, which took place at the end of the third and last day of the congress, the Valencian Ana Mafé García, PhD in Art History and academic coordinator of the project, explained to those present the importance of this study “given that the transfer of knowledge of the ancient Nazca engineers, belonging to the pre-Inca culture, to the future is a fact. Thanks to the Integral Strategic Plan it will be possible to help harvest water in the poorest water areas of southern and eastern Spain, including the Camino del Santo Grial. All this will be possible with the application of their knowledge through the Nazca 2.0 programme”.

For his part, the project director, Carlos E. Hermida, expressed his satisfaction by stating that “we have solved one of the greatest mysteries of the past, but we have also discovered a treasure for our future. Thanks to our ancestors, we will be able to expand life in deserts all over the world. Food, natural forests, endangered species? The engineering of the 21st century has begun.”

An ancient mystery of archaeology
The Nazca Lines have always been one of mankind’s greatest enigmas, driving archaeologists, historians and researchers crazy. There are more than 800 pre-Columbian geoglyphs, representing figures such as animals and plants, spread over an area of about 1,000 square kilometres in the Nazca desert, in the Pampas de Jumana, in Peru. We are talking about 10,000 lines, with a length of more than nine kilometres and a width of approximately 30 metres, and therefore perfectly identifiable from the sky.

Well, it seems that, at last, this mystery has been solved and demonstrated by the multidisciplinary team Salvar Nazca, led by Carlos E. Hermida from Vigo. The results of the study were presented at the 7th International Professional Scientific Congress on Cultural Tourism in Cordoba (Spain), held last week, from 17 to 19 February, where it won the award for best research paper, The Best Paper.

The study was presented at the Cordoba Congress by Carlos E. Hermida, technical director of the project, and Ana Mafé, PhD in Art History and academic coordinator of the project, on behalf of the Salvar Nazca team, which also includes the Canals and Ports engineer Xose Manuel Carreira.

But let’s go back to the beginning of all this. Let us go back to the year of the discovery of the famous lines, 1547, a discovery made by the conquistador Pedro Cieza de León. Since then, there have been numerous hypotheses and investigations into their origin. We could cite, among others:

Roads
In 1568, the corregidor Luís Monzón wrote that the references Pedro Cieza de León was talking about were roads.
In 1927 the Peruvian archaeologist Toribio Mejía Xesspe spotted them while hiking, and in 1936 he presented Acueductos y caminos antiguos de la hoya de Río Grande de Nasca at the XXVII Congreso Internacional de Americanistas, in Lima.

Gigantic Astronomical Calendar
In 1941 the American geographer and historian Paul Kosok established, thanks to the Carbon 14 technique, the antiquity of the lines at 550 years AD, and hypothesised that the lines were designed as a gigantic astronomical calendar.

His colleague, the German archaeologist and mathematician and naturalised Peruvian citizen María Reiche, “the lady of the Pampa”, followed Kosok’s work and dedicated her whole life to the conservation of the lines and to investigating the inspiration of their creators in the stars, convinced as Kosok was that they could be a great astronomical calendar.

Extraterrestrial Spacecraft Landing Tracks
Later, in 1968, Erich von Däniken, a detractor of Paul Kosok’s study and of Maria Reiche herself, it was undoubtedly thanks to his works Memories of the Future and The Message of the Gods, who made the lines known to the world. According to the Swiss author, the earth was visited by aliens at the time of the Nazca culture in the 1st century AD, and the lines were created as landing strips for the ships, in honour of the “gods” so that they would return to honour them with their visit.

In 1994 the Unesco Committee inscribed the Nazca and Pampas de Jumana lines and geoglyphs as a World Heritage Site.

Irrigation system
In 2010, Luis Cabrejo published a book entitled El Código Nazca (The Nazca Code), in which he hypothesised that the lines were made for hydraulic purposes, with the aim of bringing water to certain agricultural fields, using the slope of the land. We are getting closer. Cabrejo himself states that “there should be an interdisciplinary council dedicated to studying these issues.

We could add, to clarify possible doubts and avoid comparisons, the Italian researcher Rosa Lasaponara, a member of the Italian National Research Council, an entity that forms part of the Institute of Methodologies for Environmental Analysis (IMAA-CNR), focused on the study of the puquios – spring in Quechua – present in the Nazca Lines, who, in 2016, studied the distribution of the puquios using satellite images, reaching the conclusion that they were connected to each other like underground water channels.

In 2012, the Salvar Nazca project was born, a project that unites synergies between different professionals and researchers who have been carrying out fieldwork for more than eight years, with the firm purpose of investigating all the geoglyphs one by one and reaching the conclusion that they have finally resolved and demonstrated:, “The Nazca Lines are a gigantic hydraulic engineering system, a complex system of artificial irrigation lines, a pre-Inca technique already known as “water crops”, in a way that turned the desert into a green area, visible from the sky, a system that has its application in today’s world and will save millions of lives all over the world ” says Carlos E. Hermida, project manager.

The study was carried out within the area where the Pampas de Jumana are located in the Nazca desert. It was necessary to collect 3750 satellite images and a mosaic of 75 rows and 50 columns was created. The area covers a survey of 2500 square kilometres. Each geoglyph, line and structure in the area has been studied respecting and cross-checking the official cartography of the Department of Ica.

The research is initially based on the hypothesis of the Peruvian engineer Luis Cabrejo, however Carlos E. Hermida and the Salvar Nazca project team redefine, complete and amend this hypothesis using reverse engineering, reaching the conclusion that the Nazca Lines turned the enormous Nazca desert into a gigantic cultivation field, irrigated in its entirety in different seasons of the year – depending on the dry and rainy seasons – thanks to the advanced engineering system created by our ancestors.

According to Hermida, the lines are a complex system that regulates the water and therefore the humidity of the land through which it circulates, and that is why their function goes far beyond a simple irrigation system. We are talking about a set of systems that work to fulfil several objectives:
They transport water over long distances.
They collect rainwater and runoff.
They distribute water across the length and breadth of a desert.
They recover excess water.
It is stored in reservoirs for times of drought.

Nazca 2.0 irrigation system
Thanks to the Nazca culture and its complex hydraulic system, Carlos E. Hermida concludes, “we can give life to the deserts” by applying current engineering and technology to this ancestral irrigation system. The Salvar Nazca research team has named this millenary system Nazca 2.0, which is combined with current technology, and which aspires to have a practical function in any environment as it is an adaptive system.