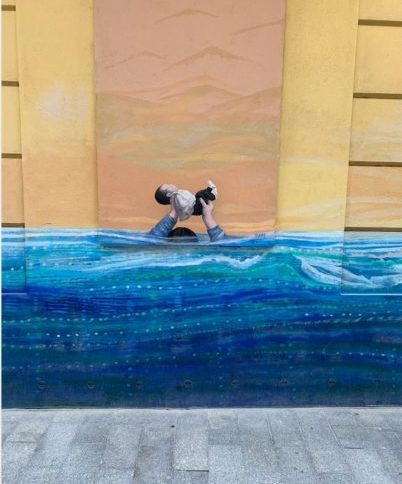 Valencia is a city that bears the marks of many peoples and ages. The Romans left their imprint on the city by giving it its name “Valentia”. The Visigoths left behind cathedrals and the Moors made their mark with language, architecture and cuisine. The modern inhabitants of Valencia, or at least a specific section of them, are no different, determined to leave their own mark upon the city.

Are you in Valencia? Good, you’ve made the right choice. Go out your front door and walk down any street you choose. Somewhere along that route will be a wall covered in graffiti. Now graffiti is a familiar concept to anyone who lives in a reasonably sized city. I’ve seen a girl on a London train walk along a carriage and tag every few metres of it with her personal tag. So what makes Valencian graffiti worthy of note? While some graffiti in Valencia makes you wonder why someone would have the audacity to pick up a spray can given their sheer lack of artistic talent, there are a multitude of murals, upon walls and doors throughout Valencia, that simply take your breath away.

The Carrer del Portal de Valldigna in the Ciutat Vella displays a beautiful ocean scene, which serves as the canvas for a protest at the fate of migrants crossing the Mediterranean. One section of wall shows the body of Alan Kurdi, a three year old Syrian refugee washed up on the beach of Turkey in 2019, evoking the words of poet Antoine Lerougetel, “Head lapped by the gentle waves, face down in the watery sand. No rise. No fall.” The artist, Victoria Cano Perez (Instagram @VictoriaCanoPerez) depicts the boy’s lifeless body with angel wings, whilst the adjacent wall shows a pair of drowning hands desperately struggling to keep a swaddled baby out of the water’s cold embrace. This served as a commemoration for the 60th anniversary of the “Riada de Valencia”, the flooding of the River Turia in 1957, which left 81 people dead and three-quarters of the city underwater. Following this tragedy the river was diverted away from the city centre, with the land leftover turned into a five mile long river park, the longest in Europe.

Taking a left from the Portal de Valldigna will take you onto the Plaça de Sant Jaume, where a sea of beautiful murals vie for the attention of passers-by. A tableau reminiscent of Picasso’s Guernica stands next to an armoured robotic crab spitting fire, which is in turn bordered by a beautiful depiction of a human eye in manga style on a metal door.

A wide array of murals that adorn Valencia’s streets share an almost hallucogenic quality. Carrer de Sagunt in Zaidia depicts a part snake, part human and part squirrel deity ruling over a strange world. I really hope that it is science fiction and not a glimpse into our future.

Its neighbours are cut from the same cloth. A blue human head with a planet for a brain and a family of Saturn for a mouth watches on as fish with a human skull fights a multi eyed alien from inside a robot with a fish tank for a head. What I wouldn’t give for a glimpse into the minds of these artists and see what creative processes and vivid imaginations spawn such creations.

The streets of Valencia are not only a way to get from A to B, they can also be open-air art galleries, with artists proclaiming to the world that just like the Romans, the Visigoths and the Moors before them, “we were here!”